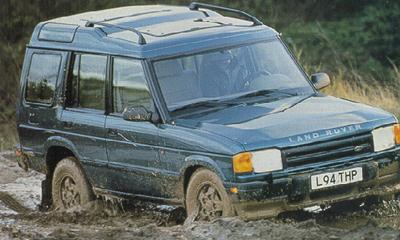 For years we knew this line of full-size sport/utility vehicles as the Blazer family – big, rugged 2-doors that were equally at home on boulevards or in the boonies.

Those capabilities are pretty much the same but there have been a couple of significant changes for 1995.

Foremost in this category is the addition of a 4-door model, giving this line – along with its Yukon counterpart from GMC Truck – a dimension its primary competitor, the Ford Bronco, doesn’t have. Yet.

The other change is the name. Most of the sales action in the sport/utility market is in the compact segment now. Accordingly, Chevy’s compact sport/ute, formerly known as the S-Blazer, is now the Blazer. The full-size entry, called the K-Blazer last year, is now the Tahoe.

Owing to a late production startup on the 4-door Tahoe, we based our driving impressions on a 2-door LT version. However, we did have an opportunity to take a look at a 4-door prototype at a Chevy press preview.

At a glance, it’s not easy to tell a 4-door Tahoe from its big cousin, the Chevrolet Suburban, unless the two are parked side by side. Then the Suburban’s bigger-than-life dimensions are more apparent. At 198.5 in., the Tahoe 4-door is 21 in. – almost 2 ft. – shorter than the Suburban, and its 117.5-in. wheelbase is also shorter, by 14 in.

Compared with the 2-door Tahoe, the 4-door is 10.8 in. longer overall and has an additional 6 in. of wheelbase that should add up to better ride quality. And more room, to boot.

The bottom line is a full-size 4-door sport/utility that fills a long-vacant niche in the market. It doesn’t have the Suburban’s seating capacity, but it’ll be a lot handier around town.

Aside from its new name badges, the exterior of the 2-door Tahoe is unchanged for 1995. The front end still has the same appearance as the Chevrolet/GMC C/K truck family, which is appropriate because the C/K pickup chassis is the basis for all the GM sport /utility offerings up to and including the Suburban.

Powertrain options are also unchanged. GM’s ubiquitous 5.7-liter V8 is standard, bolted to a 5-speed manual transmission. A rugged 6.5-liter turbodiesel V8, a good choice for heavy-duty towing, was added as an option last year and a 4-speed automatic is available with either engine.

Our LT tester had the gasoline V8, the automatic transmission and GM’s part-time Insta-Trac 4WD system – this is how most of the 2-doors are likely to go out the door.

On the inside is where GM has been busy and the hard work shows to good effect. In addition to creating the new 4-door, the design team crafted a new interior for both editions of the Tahoe, including a much more contemporary instrument panel that finally includes a driver’s airbag.

The white-on-black analog gauges are spiffy and easy to read. We liked the new rotary-knob climate controls, as well as the bigger controls on the audio system.

The instrument panel includes two 12-volt outlets for any power accessories you care to truck around with you, and one of the audio systems has a speed-sensitive volume control that pumps up the sound as the speed needle climbs. It’s not exactly essential, but it’s a nice touch.

Our Tahoe tester was equipped with high-back bucket seats (a bench seat is standard), an option that includes a center console with a swivel-top writing surface, map storage, cupholders for folks in the rear seat and a removable coin holder.

The seats themselves are reasonably comfortable, but the front seats could use a little work on the bottom cushion for all-day comfort. The rear seatback folds flat for cargo expansion, though the 4-door is a better bet if you’re going to do much bulky hauling.

Access to the cargo area is good whether you choose the standard doors that split vertically or the optional setup with a drop-down tailgate and flip-up rear window. We’d give the accessibility edge to the traditional doors, but the one-piece rear glass of the clamshell hatch affords better vision to the rear.

In addition to a flat cargo floor, the Tahoe’s cargo space is maximized because the spare tire is kept under the vehicle.

About the only element in the Tahoe’s new interior that drew any criticism was the power-mirror control, because it was a little confusing at first.

Other than that, we found the Tahoe interior to be well-appointed, well laid-out and as pleasant as its arch rival, the Ford Bronco. It’s true that rear-seat legroom and access is tight in the Tahoe 2-door, but if those are key considerations, you now have a 4-door option – without the bulk of a Suburban.

Although GM has done a good job on ride quality in all its trucks, the 2-door Tahoe probably wouldn’t be your first choice in this department. Like the Bronco, its relatively short wheelbase is fine for off-road use but makes for a choppy ride on pavement.

For all its size, the Suburban yields better ride quality. We expect the 4-door Tahoe to strike a happy medium in this regard.

The Tahoe’s standard 5.7-liter V8, however, needs no apologies. It’s got more snort than the Bronco’s basic 5.0-liter V8 and, thanks to refinements to the induction system for 1995, it’s quieter than the ’94 version.

Whether it’s moving the 2-door or the bigger 4-door, we think the performance of the Tahoe’s standard V8 will be more than satisfactory for any job you’re likely to ask it to do.

Acceleration in our test Tahoe was respectable considering its weight. Fuel economy is on a par with the competition, and we know from past experience that this engine can tow with the best.

The turbodiesel V8, of course, has even more low-down, stump-pulling grunt, and GM forecasts considerably better fuel economy. But despite ongoing improvements, diesels still aren’t as pleasant to live with as gasoline engines.

When it comes to handling, the Tahoe holds its own. The variable-assist power steering makes it easy to maneuver in parking lots, delivering acceptable road feel as speed increases. We’d prefer a little more road feel at freeway speeds – the Tahoe’s steering is a bit numb when the front wheels are centered – but this is common with many sport/utes.

Like all members of the sport/utility clan, the Tahoe is fundamentally a very civilized truck, and that’s exactly how it handles. Its responses are deliberate, and there’s plenty of body roll in hard cornering.

There’s a lot of weight transfer going on when you swing the Tahoe into a corner, and getting all that weight to move in another direction requires planning and patience.

Weight also affects braking. The Tahoe gets a plus here for its standard 4-wheel anti-lock system, but mass is mass. The more mass you set in motion, the more difficult it is to stop.

With its new interior, the Tahoe/Yukon closes a lot of ground on the Bronco. Where the Tahoe/Yukon moves into a clear lead is with the availability of a 4-door model, providing an alternative no one else offers.

The challenge GM faces is meeting demand. The 4-door Tahoe/Yukon will share factory space in Janesville, Wisconsin, with the workhorse Suburban. Although GM is shifting some truck production out of Janesville to make room for the new work, it’s fair to note that Suburban production has consistently lagged far behind demand and that recent GM new-product startups have been slow.

So if the full-size 4-door concept appeals to you, you’ll probably have to wait. But we think you’ll find it worthwhile.