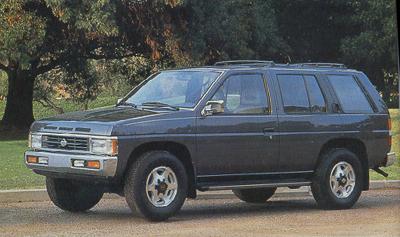 In general, sport/utility vehicles evolve from pick-up trucks, and the popular Nissan Pathfinder is not one of the exceptions. Its smooth bodywork is bolted to a rugged pickup chassis, just like most of its rivals. But the Pathfinder is exceptional on a couple of other counts: its continuing popularity, particularly with younger buyers, and its all-around quality.

Judged by the increasingly tough standards for an increasingly popular class of vehicles, its ride and quality are rated as excellent and its durability measures up well with the strong reputation established by Nissan’s line of compact pickups.

The Pathfinder’s pickup roots are clearly apparent in its external appearance. Its body shape anticipated today’s trend toward rounded, aerodynamic exteriors by several years. And the few odd visual touches – the hidden handles and false wind-wings on the rear doors, for example – don’t seem to bother anyone.

Since a sport/utility has a one-piece body rather than the separate cab and box of a pickup, there’s extra structural rigidity to benefit handling and durability. The Pathfinder is better than most in that respect. Our test vehicle was generally devoid of squeaks and rattles.

Essentially unchanged from 1994, Nissan offers the Pathfinder in three trim levels. The XE is the only member of the trio with 2-wheel drive. Its attractive package offers several comfort and convenience features: an 8-speaker AM/FM stereo with cassette sound system, tinted glass and a washer/wiper for the rear window. Add the optional air conditioning and it’s suitable for all climates.

The upscale SE and LE versions have 4-wheel drive and, between them, enough standard features to make option shopping virtually unnecessary. The LE is the most luxurious, with a menu of amenities that runs from A/C and a CD player to rear-wheel disc brakes (all Pathfinders have rear-wheel anti-lock brakes) and automatic transmission. It can be made even more luxurious with optional leather upholstery, although we find cloth friendlier for extended travel. Some of these items can also be included on XE and SE Pathfinders at extra cost.

Our test model was the slightly sportier SE. Among the options available for the SE model is a Sport package that offers added versatility for those wanting to make maximum off-road use of their Pathfinder. The Sport package adds a limited-slip rear differential, two-position adjustable shock absorbers, rear disc brakes and a roof rack.

Beneath the skin, the Pathfinder has a rugged steel chassis that carries a 3.0-liter, SOHC V6 engine. Though its power ratings might seem a little anemic for a vehicle weighing in a nearly two tons, the Pathfinder feels perky around town and on the open road.

As you’d expect from a vehicle that was designed to deliver the goods off-road, our SE tester was also equipped with a 4WD system. Like most contemporary sport/utility 4WD setups, Nissan’s is a part-time, on-demand system and can be engaged while the vehicle is in motion.

A redesigned Pathfinder interior was introduced in 1994. Its elegantly curved dashboard helps make the passenger compartment feel familiar if you’re making the transition from sedans. You’ll find controls where you would expect them to be, with a standard array of instruments and seating that’s thoroughly carlike.

However, you might not feel as comfortable with the Pathfinder’s passive safety features. If you could look inside the doors, you’d find door beams to help protect you from side-impact intrusion, but airbags are nowhere to be found. The Pathfinder lags some of its competitors in this respect.

Safety issues aside, first-time drivers and passengers will find that the Pathfinder cabin has a couple of sport/utility quirks that have no parallel in passenger cars. Both are minor, both have to do with extensions and both stem from the vehicle’s pickup truck origins.

First, we had to simultaneously stretch and duck when entering or existing our Pathfinder, a minor gymnastic effort that’s due to lots of ground clearance and an extremely low roofline.

Second, the seats were inadequately padded because of the need to mount them close to the door in order to provide sufficient headroom under the low roof.

You may also find backseat legroom a trifle snug for adults, particularly if you compare the Pathfinder with Ford’s roomy Explorer, the compact sport/utility pace-setter when it comes to roominess.

On the other hand, the Pathfinder’s interior is exceptionally attractive. The materials in or SE were of high quality, chosen for their appearance as well as their durability, and we couldn’t find a misaligned seam or a loose fitting anywhere.

Since our SE had all the right stuff for dirty driving, we took it out for an excursion beyond the end of the road. And as we expected, it was solidly capable.

The 4WD system can be engaged on the run with a flick of a lever, the power steering makes working around obstacles effortless and the generous ground clearance takes care of the rocks and stumps you can’t drive around. The big 31-in. tires help in this respect, of course, although the penalty for tires with good off-road capability is a little extra tire noise when you’re on the pavement, and a small sacrifice in on-road handling.

The manual transmissions shifts quite smoothly, aided by light but sensitive clutch action. However, the automatic is preferred by many buyers because its electronic controls ensure smooth shifts, and, surprisingly, a pathfinder so equipped is nearly as fuel efficient as one with a manual gearbox.

Even with its big off-road tires, our Pathfinder’s handling was on a par with the best in its class. Like all sport/utilities, it feels somewhat top-heavy on winding roads, at least compared to a car. That’s because its center of gravity is considerably higher than a car’s.

Beyond that, we’d classify the Pathfinder’s handling as better than average, something that can also be said for its comfortable ride – keeping in mind that this is, after all, a truck.

When it comes to heavy-duty hauling chores – towing loads in excess of 2000 lb., for example – the Pathfinder ranks in the lower quadrant among competing vehicles. The V6 engines offered in the Ford Explorer and the Chevy Blazer/GMC Jimmy twins have much better towing capabilities, as does the Jeep Grand Cherokee V8.

The real strength of the Pathfinder’s enduring popularity lies in its styling and excellent service record. Against rivals such as the Toyota 4Runner, it scores in several key areas, most notably ride quality and performance.

When rated against others, like the Ford Explorer, it may be a little inadequate on refinement and interior space. And as we noted earlier, its load-hauling power weighs in a substandard compared with some of its competitors, particularly those from U.S. manufacturers.

Still, it has all the expected virtues. Useful features are in abundant supply, and it’s as well-made as Nissans are expected to.