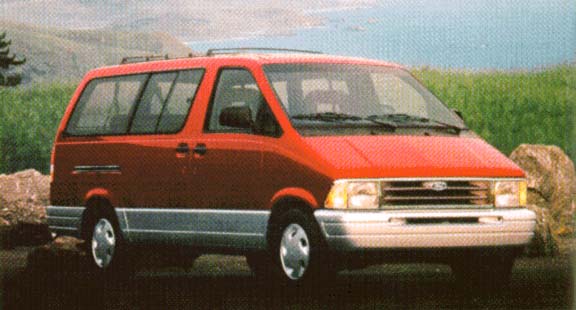 Considering all the emphasis on youth in America, it's nice to know a few traditions remain untouched, such as that roomy old reliable, the Ford Aerostar minivan.

It's a big minivan with a folksy ambience–a family dinner table on wheels–and except for the welcome tweak here and there, not a lot about the Aerostar has changed in recent years.

Except, of course, its life expectancy.

Ford was all set to put the Aerostar to sleep a couple years ago, when the front-drive Windstar emerged as the company's slick new family hauler. Understandably, Ford saw little reason to keep a loveable old lug like the Aerostar around.

Still, Aerostar's charm then and now is that it possesses some of the broadest shoulders in the marketplace. It's a rear-wheel-drive horse that can haul loads and hold lots of people. Had Ford carried out its plans, families galore would have been as disappointed as a militant majority of Ford dealers, who lobbied hard to keep the Aerostar in the family. The dealers didn't want potential customers heading off to General Motors for Chevy Astros and GMC Safaris, the Aerostar's key competitors.

So, here it is again in '96. Big and pleasantly bulky. Long, especially in the long wheelbase model, and offering some of the best legroom of any vehicle this side of a rock star's road bus. But it's also good-looking and pleasant to drive, a maxi minivan that delivers family-solid, meat-and-potatoes service covering a broad range of duties.

One thing Aerostar drivers will tell you right up front: It's a great vehicle for carting kids and hauling your boat to the lake, a little better suited to unpaved country back roads and fire lanes. But it's not as great when snow is falling and you've got a steep hill to climb.

The blessing of rear-wheel drive–greater towing capability–can also be something of a curse in slushy weather. On the other hand, not many minivans have a towing capacity of 4400 lbs.

This is a tall vehicle with a high center of gravity and relatively low weight over the rear wheels. That's one of the reasons why a few Aerostar drivers have been known to yank out the rear seats and throw bags of sand or cement in the rear, an old-timey winter traction trick.

But most drivers seldom find themselves struggling with Arctic conditions on a regular basis. Generally speaking, the Aerostar digs along nicely in nasty going if you're patient and not blizzard-busting at brisk speeds. Our test van's optional ($252) limited slip rear differential helped make the most of available traction. Throw in Aerostar's all-wheel drive option–an extra $2000–and you've got a minivan that can take on just about anything.

Although the Aerostar escaped extinction, the line has been pared down considerably. The old XL and Eddie Bauer models have disappeared, leaving only the XLT, plus a utilitarian commercial version with only two seats. In non-commercial trim, it's a straight 7-passenger van, available in standard and long wheelbase versions with a 3.0-liter V6 and 4-speed automatic transmission.

If you want a bit more muscle, we recommend the 4.0-liter V6 engine option that's available on the extended-length version. It's a particularly good bet if you have any heavy hauling or towing on your agenda.

Cosmetically, the Aerostar hasn't changed much at all during the '90s. It has an abbreviated nose slanting up toward all that cabin glass, an easy-opening rear hatch, a single right-side sliding door and easy access to the interior.

Polish it all off with a rich exterior color–our test van was dark emerald, with medium gray cloth seats–and you have a vehicle that's easy on the eye. It may lack the swoopier looks of the Windstar and the new Chrysler minivans, but it's a well-dressed workhorse nevertheless.

Sitting in the Aerostar's driver or front passenger seat is a little like looking out the windows of a posh second-story restaurant. Quite a view, quite an elevation.

One of the higher rides on the road contributes to the same sense of command that a lot of folks favor in sport-utility vehicles and pickup trucks.

This van is major-league comfortable. The front captain's chairs, for instance, have the firmess and contours you want for support and stability, with enough give to keep lower backs and legs happy over a long, long haul. One element of our test included a 240-mile night trip in the dead of winter. Although that kind of driving can build tension, all hands arrived at our hotel fresh and relaxed, including an 8-year-old who was able to stretch out and snooze most of the way.

Cargo room, obviously, is the other big plus for this van, particularly with the rear seats removed. The downside to seat removal is that it's a task better left to your friendly neighborhood NFL lineman. Too much weight, too much work. In this area, virtually all of the newer front drive minivans have an edge.

But once the seats are extracted, and the linemen have gone home, cargo space totals 139 cu. ft., a number that zooms to 167.7 cu. ft. in the extended model. Although the new Chrysler minivans now offer similar cargo capacity, that's still a lot of room to put stuff–lumber, bicycles, wading pools or all the bags of springtime topsoil your garden will ever need.

As for the Aerostar's cockpit comforts, instrumentation is basic and no-nonsense, with clearly displayed gauges and handily positioned controls, such as the headlight switch, rear defroster and the climate controls. One thing we didn't care for was the hard-to-find horn buttons, which could be tough to hit in a split-second situation.

Another troublesome exception–push-button audio controls. These exercises in fingertip dexterity may be fine for a sobriety test, but we found them unnecessarily challenging to use when the van was moving.

We also noted the absence of a front passenger airbag. Ford's resistance to this passive safety installation, which would entail a significant interior redesign and retooling investment, indicates that the Aerostar is still on the endangered species list.

There are vans with greater getaway acceleration than the Aerostar. GM's Astro/Safari twins have distinctly more punch, as well as higher towing capabilities, though they still suffer from cramped front footwells.

On the other side of the ledger, the newest front-drive minivans provide a smoother, more car-like driving experience. The Aerostar, after all, is essentially a truck at the chassis level.

But even so, we liked the way this van performed on long trips. The ride quality might be a trifle firmer than, say, the Windstar, but it's non-intrusive on the open road and the high seating position delivers a commanding view. And we found that the standard 3.0-liter engine had plenty of get-up-and-go in passing situations, an activity that was enhanced by the overdrive on-off switch, handily set into the end of the steering column-mounted shift lever. Switch the overdrive off for a little extra go, switch it back on to resume cruising.

The Aerostar is equally comfortable around town. For all its size, it's just as maneuverable as its front-drive rivals, a rear-drive advantage that shows up in a relatively tidy turning circle.

It also does a good job of keeping up with urban traffic. The standard V6 is adequate for basic light duty, but not much more. The larger V6, with its extra low-rpm grunt, is a much better choice for the kind of heavier hauling that is really this van's strong suit. In this sense, the fact that you get a larger van with the larger engine makes sense.

On the other hand, more room means more money. The extended Aerostar starts at $21,120.

Originally conceived as an answer to the first Chrysler minivans, the Aerostar is an old school rear-drive van that's at its best when it's harnessed for hard work. It can haul–and tow–heavier loads than the front-drive crowd, and gets the job done with a fair degree of comfort and style.

If car-like driving is high on your list of priorities, you'll probably be happier in one of the many excellent front-drive minivans.

But rear-wheel drive and rugged construction still have a place in this arena. And, in the Aerostar's case, the price is attractive.