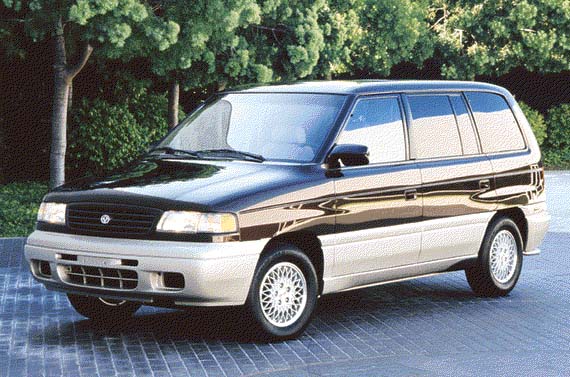 Oh, what a difference a door makes. Mazda has added a fourth door to the MPV this year. The new rear door on the driver's side means back seat passengers can get in and out from either side. It means the driver no longer has to run all the way around to unbuckle the baby from the back seat. It means the MPV is even more carlike than before.

The Mazda MPV is certainly not the newest design on the minivan market. Until this year, little had changed on the MPV since its 1988 introduction. And while the 1996 model offers some refinements and styling changes, it does not represent a major redesign.

Fortunately, the MPV's styling has aged well. The design does not look dated and the performance, handling and features help the MPV hold its own against the competition. This minivan is actually fun to drive.

One of the things that sets the MPV apart from most of the minivan market is its rear-wheel-drive layout. The Toyota Previa, Ford Aerostar and Chevrolet Astro/GMC Safari twins are the only other minivans that employ rear-wheel drive, and the Ford and GM products are essentially trucks. This setup makes the MPV a good choice for those who tow trailers. Drivers who want improved traction and handling in slippery conditions should opt for the four-wheel-drive model.

Mazda offers three trim levels–the DX, the well-equipped LX and the leather-lined ES. The 4-wheel-drive model is only available in LX and ES trim. We evaluated the MPV LX 4WD, which comes with a cloth interior and was equipped with optional captain's chairs for back seat passengers. A new All-Sport package introduced at mid-year is designed to bridge the gap between minivans and sport-utilities through the use of off-road styling cues.

The 1996 Mazda MPV appears familiar, but somehow looks more aggressive than before. The new appearance is the result of a bigger front end and a new rear bumper, all designed to improve crashworthiness. The longer nose also makes it easier to see the front corners when parking.

The MPV remains a handsome vehicle with its bulging fenders, horizontal taillights and chunky new front end. Mazda strived to make people think “car” when they looked at an MPV. The tail lights are horizontal and the B-pillars are moved back for bigger, more carlike side windows.

Four hinged doors makes the 1996 MPV more convenient and more carlike than ever. The Honda Odyssey and the Chrysler minivans are among the few that offer rear doors on both sides. Most minivans use sliding doors, but those on the Mazda and Honda are hinged and swing open like the doors on a sedan. All four doors on the MPV feature power windows that go all the way down.

The DX and LX come with a choice of four solid colors. The LX also offers three optional two-tone schemes, while the leather ES can be identified by its bordeaux and sand mica two-tone paint.

While most new minivans are front-wheel drive, the MPV uses rear-wheel drive, making it a good choice for towing. The load leveling package, optional on the LX and standard on the ES, raises the tow rating to 4300 lbs. on the 2-wheel-drive MPV and 4000 lbs. on the 4WD model. The Chevy Astro/GMC Safari are the only minivans that can tow a significantly heavier load and they are considerably more trucklike than the Mazda.

The MPV's towing package includes an automatic load leveling system that works well for balancing heavy loads, a transmission oil cooler, a larger cooling fan and a full-size spare tire. The bigger fan and full-size spare are standard on the 4WD model. Without the towing package, an MPV can pull up to 2600 lbs.

The All-Sport package, designed to give the MPV a sport-utility image, is mostly cosmetic and is available for both 2- and 4-wheel-drive models. It includes a unique grille, a stone guard beneath the front bumper, fender flares, a rear bumper cover, a roof rack and special graphics. Larger tires on bright alloy wheels are also available. The bottom line is that any MPV 4WD model can go anywhere an All-Sport can go.

Mazda has modernized and improved the interior of the new MPV. Sweeping, graceful lines replace the blocky, angular look of last year's dashboard. A new speedometer and tachometer are bigger and easier to read. Gauges, indicators and warning lamps have been repositioned for easier viewing. Controls for the stereo, heating, ventilation and air conditioning are easy to reach. The glovebox in last year's MPV was capable only of holding the owner's manual. Now gloves can actually be stored there.

The only downside we found to the controls is that it's easy to bump the windshield wiper stalk when shifting into park.

Overall, the interior of the MPV is a nice place to be. The MPV offers more front headroom and legroom than the Caravan, Previa and Villager and more headroom than the Windstar. Getting in and out of the driver's seat couldn't be easier. The view is excellent in all directions with an expansive windshield, big side windows and large mirrors.

The seats are comfortable and supportive. They come upholstered in an attractive velour cloth on DX and LX trim, while the ES gets leather. The leather is nice, but the ES retails for $2300 more than the LX and we really liked the cloth.

The MPV will seat five, seven or eight passengers, depending on the seating configuration. All MPVs come with front bucket seats. The DX and LX come standard with a 3-passenger second-row seat. The LX and ES come with a third bench seat in the rear. With the standard 3-passenger second row seat, the LX can haul eight people, but they'd better be good friends. The downside of this arrangement is that the width of the second-row seat makes it difficult to get into the third-row seat.

This year, Mazda offers a pair of captain's chairs for the second row that are standard on the leather ES and optional on the cloth LX. The captain's chairs are comfortable and make it easy for people, particularly children, to get into the rearmost bench seat. After spending time with all the configurations, we recommend the LX with the optional captain's chairs.

An even more important improvement to the seating is that the third row seat is now much easier to remove. Release a couple of latches, store it in the garage and the MPV is ready to haul four or five passengers and their gear. (Those who don't think they'll ever need the third row seat may want to order the DX model and save some money.)

The center bench can also be removed by releasing latches, while the center captain's chairs can be quickly unbolted. This feature turns an MPV into a serious cargo hauler in a short period of time. It also makes the MPV a great camper with more flat sleeping space than most sport-utility vehicles. Keep in mind that the seats are heavy and will take up a fair amount of space in the garage. For smaller jobs, the middle and rear seats can be folded flat for loading long items.

A 4-wheel antilock braking system is standard on the MPV. Dual airbags and 3-point seat belts in all outboard positions are also standard. All four doors incorporate side-impact door beams and the new front end was designed to better absorb frontal impacts.

Like most minivans, the MPV drives like a car. It handles nearly as well as a sedan, provides adequate power and stops competently. The MPV LX 4WD we tested was a rock solid companion on snow and ice, but we'd opt for a 2-wheel-drive LX if we lived in a warmer climate. The 4WD model rides a little higher and its ride quality suffers slightly, but it is still quite pleasant. The MPV can be shifted from 2-wheel drive to 4-wheel drive by flicking a small switch on the shifter column. Another button locks the center differential for sure traction when it's really slippery.

Twist the key and the MPV's 3.0-liter V6 starts with a reassuring roar. The engine is a bit on the noisy side, but delivers adequate power for passing and solid torque for pulling away from intersections with heavy loads. The 4-speed automatic transmission selects the appropriate gear for the conditions and shifts smoothly.

Spend some time in an MPV and it almost seems sporty. The sedan-like handling inspires confidence. With a turning circle of only 36.1 feet, an MPV can complete a circle in less space than any other minivan, matching the turning radius of the Honda Accord Wagon. The MPV is longer than the Dodge Caravan and Ford Aerostar, but shorter than most minivans. The relatively short length and tight turning radius make the MPV easy to park and maneuver in tight quarters.

The MPV was designed well from the start and significant improvements to this year's model make it safer and more enjoyable to live with on a daily basis. It offers good handling, adequate acceleration and a roomy, comfortable interior with an expansive view. Overall, it's a great vehicle for carpooling or hauling the family around.

All of this doesn't come cheap. A fully loaded MPV comes close to $30,000. We recommend ordering an MPV in LX trim with the captain's chairs, which should be available for considerably less.