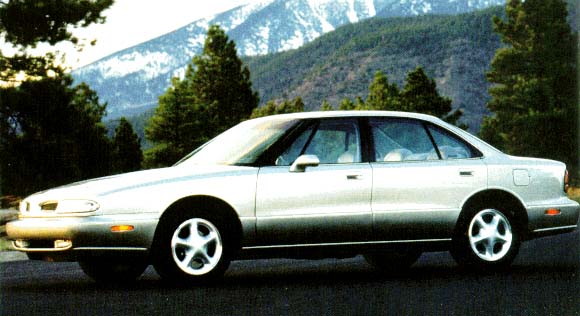 What's happening at Oldsmobile these days? Not much. Just your everyday, start-from-scratch renaissance.

The folks at Oldsmobile got tired of hearing the words stodgy, conservative and out-of-date associated with their cars. So they're doing something about it. The slick Aurora sedan is the most obvious indication of fresh thinking at the old rocket division, but the popular Eighty Eight sedan lineup, particularly the LSS, has been getting its share of attention as well.

And if you're the type of gadget freak always interested in the newest and hottest technology, or simply someone who can't make it to the grocery store without a map, the Olds LSS will have even more appeal.

Even though all the Eighty Eights have been freshened up for 1996, the evolution of the LSS doesn't show much from the outside. Its styling, though free of bright trim pieces, is still subdued and conservative by contemporary standards. But automotive beauty goes beyond what you can see from the outside, and the sober bodywork surrounds a competent large front-drive sedan with an excellent powertrain.

As noted, Oldsmobile has tried to sever the ties between the LSS and the other, less expensive Eighty Eight variants. But standing side-by-side in the showroom, it's hard to tell the difference at a glance, save for the most subtle touches. For that matter, there's a strong family resemblance to several other GM models sharing the same basic chassis. But then, there's no shame in looking like the Pontiac Bonneville, one of the best products the automaker offers.

The refinements designed to distance the LSS from its siblings are good ones, in our view. There's far less chrome and in place of the eggcrate grille are a pair of scoops reminiscent of Pontiac or even BMW. In fact, you'll have to look hard to find any splashes of bright stuff on the LSS, other than the alloy wheels–though they're available with chrome plating ($600), if you must.

The bottom line? Call this a Monarch butterfly in metamorphosis. Eventually, the LSS could blossom into a real world-class sport sedan, but for now, it's a plush American sedan, offering lots of luxury and pleasant road manners at a sub-luxury price.

Like its exterior, the LSS interior is progressive in a subdued way. The instrument panel is well laid out, with easy-to-read analog gauges and most of the controls well placed–easy to see, easy to reach. Subtle details tell you a lot about the mindset of the engineers designing a car, though. On the LSS, Olds adds a tachometer to the standard equipment list, but it's a half-dial and it's parked nearly out of view on the left side of the panel. The handles and knobs are also old-school Olds.

We're particularly fond of the “pod” controls–the radio and climate system switches mounted on the steering wheel. It doesn't take long to learn how to use them without reaching, or taking your eyes off the road. Like the power window controls, they're backlit for easy use at night and they're handsomely integrated into the wheel hub design.

And while we're on the subject of the wheel hub, let's give credit where it's due. Since the advent of the airbag, automotive engineers have had a habit of moving the horn to some odd and usually out-of-the-way locations. On the Eighty Eights, you just have to touch any spot in the steering wheel hub. That's about as accurate as most of us get in an emergency.

Though the seating in our leather-lined test car was comfortable, and there's enough room inside to make this a true 5-seater (or six, in the Eighty Eight and Eighty Eight LS), there's not much lateral support in the front buckets. We view that as a weakness in a vehicle that's attempting to win recognition as a driver's car.

You will find plenty of visibility, with only minimal interference from the small roof pillars. But Olds, how about some bigger mirrors? We found ourselves craning our necks to get a good view into the traditional blind spots, which is where danger lurks on the freeways.

If you've ever found yourself lost in unfamiliar territory, without a map or the slightest idea where to go next, you're likely to appreciate one particular LSS option. It's called the Guidestar system, and it's the first on-board navigation system offered for sale in the U.S. as a factory accessory.

Here's how it works: A roof-mounted antenna monitors a network of navigation satellites, using their signals to plot the car's location with an accuracy of about 50 feet. A computer, stashed away in the trunk, constantly compares that information to an electronic map, stored on a CD-ROM. Enter an address or even an intersection, and Guidestar will plot out the best route. It will not only display the directions on-screen, but–its real strength–read them out in a friendly voice. No squinting at impossibly small map grids while you're driving.

Be cautioned that not all regions of the country have been mapped yet. But Olds is steadily rolling out Guidestar CD-ROMs for new markets. And at $1995, it's priced well beyond the realm of a mere toy.

Forget cosmetics. If there's one place the LSS really proves its beauty, it's when you're sitting behind the wheel. This vehicle has both poise and presence. GM's slick Magnasteer variable-assist steering system continuously adjusts the amount of boost it provides depending on how fast you're driving.

In most driving situations, we found that the LSS provides a pleasantly balanced suspension–firm enough to keep you in touch with the road, but not so hard as to leave you shell-shocked after an hour's driving on rough pavement. Compared to, say, a BMW, the compromise between ride and handling still favors cushy over hard-edged, but the LSS responds to driver commands with an authority that's a welcome step forward.

The LSS powertrain proves that rules are made to be broken. Today's conventional wisdom says that a truly modern engine must have an overhead cam and at least four valves per cylinder. Also, many American drivers still believe that the more cylinders you have the better. GM's 3800 Series II V6 disproves both those arguments. Even without the optional supercharger, it's smooth and quiet, with plenty of punch.

Our test car had the optional supercharger, boosting horsepower to 225, enough to propel this hefty, 3583-lb. sedan from zero to 60 in just over seven seconds. That's more than a second quicker than the Lexus ES 300 or the sporty Mercedes C280. For those who like maximum performance, the optional blower is likely to be a must, but it does add $1000 to the bottom line.

Any complaints? Certainly. Like many GM models, the LSS could use better brakes. For the size and price of this vehicle, we'd expect Oldsmobile to offer disc brakes front and rear, not just up front, even though this car's pronounced forward weight bias does put most of the braking burden up front.

Nevertheless, the rear drums can get a bit soft and mushy, especially after a few high-speed stops. On the other hand, ABS is part of the extensive list of standard equipment, even on the basic Eighty Eight.

The Eighty Eights share basic chassis and powertrain components with the Buick LeSabre and Pontiac Bonneville, two of GM's more successful cars. It's curious to us that the Oldsmobile versions don't share the sales numbers. Maybe it's because Oldsmobile is still seeking to redefine its image. But be that as it may, the Eighty Eights–particularly the LSS–are very pleasant cars to drive. Quiet, powerful, roomy and well-appointed, they fall neatly between the even more conservative LeSabre and the brash sportiness of the Bonneville. It can be argued that they're not standouts in the world of automotive fashion. But value has a beauty all its own.