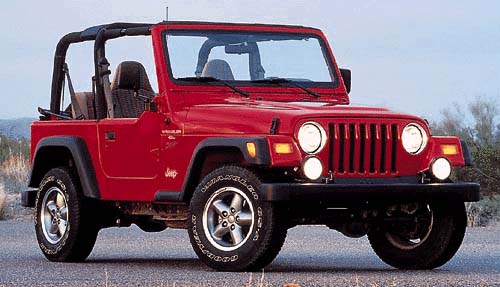 Spring runoff had carved deep gullies in the muddy trail as we slogged past Buckhorn Canyon toward Fort Misery. Phoenix sprawled, forgotten, to the south, while Whiskey Springs rose 6700 feet above Horsethief Basin to the east. The primitive road wasn't even on the Arizona map, and for good reason. A car simply would not have made it up the muddy, rutted hill climbs. A big four-wheel drive sport-utility, such as a Jeep Grand Cherokee or even a two-door GMC Yukon might have gotten through, But very few sport-utilities would have tackled this primitive track as easily as the new Jeep Wrangler.

Yet, when we left the trail and turned south onto I-17 toward Phoenix, we were grateful for its smooth, comfortable ride quality. That's the essence of the new Wrangler. It provides the ultimate in off-road capability without punishing its occupants on the long road back to civilization. It's the right choice for perilous off-road treks like California's Rubicon Trail. But it's also fun for just bopping around the neighborhood. And it makes a statement about your lifestyle–or at least what you'd like your lifestyle to be.

Introduced in mid-'96 as a '97 model, the Wrangler has been completely redesigned and re-engineered. It's vastly improved over its predecessors in every respect. Yet it remains true to its gritty World War II heritage, when Jeeps served with distinction around the world.

Since then, the little Jeep has become synonymous with off-road capability. When the ads say “There's Only One Jeep,” this is the one.

The last generation of the Wrangler–the YJ, distinguished by its square headlights–sacrificed off-road capability for improved road manners. This angered off-road enthusiasts who donned T-shirts that read, “Real Jeeps have round headlights.”

The people at Jeep didn't like those T-shirts. So they made a host of improvements without compromising the Wrangler's original purpose. They were successful. The 1997 Jeep Wrangler is the best it's ever been. It's quieter. It's more comfortable. It's roomier. It rides better. It handles better. It's more capable off road. It even has round headlights.

The Wrangler remains a familiar face even though almost every body panel has been redesigned. No vehicle is more instantly recognizable, and the folks at Jeep weren't about to change that.

The open fenders, flip-down windshield, big grille, plastic side curtains and exposed hinges and fasteners are still there to give the Wrangler that rugged, utilitarian, no-nonsense look that has appealed to us for over five decades.

The Wrangler comes with a choice of tops, both of which have been redesigned to simplify removal and provide better sealing. Purists prefer the soft top, a high-quality piece of equipment that can be configured according to the weather. Folding the top down takes only a third of the time it took before, and if a screwdriver is handy, the windshield can be flipped down for breezy, low-speed touring in the back country.

The side curtains, however, are a hassle in everyday use. And the soft top still generates a lot of racket at highway speeds. We think the $755 optional hard top is the better choice for real world driving, providing more security for expensive gear and better protection from weather. It comes with full-height doors and wind-up windows. Rearward visibility is aided by the rear-window defroster, wiper and washer. Wind noise is reduced.

Some 15 pounds lighter than its predecessor, the new hard top can be removed and stored when not in use. It can also be installed over the soft top.

The Wrangler is available in three models. The bare bones SE is attractively priced at $13,995. That figure rises rapidly, however, when carpeting, nicer seat fabric, a rear seat, a stereo, power steering and other options are added. The SE's four-cylinder engine is at its best teamed with the standard five-speed gearbox.

We recommend those who opt for the three-speed automatic transmission seriously consider the Sport and Sahara models, which come with the much more powerful 4.0-liter six-cylinder engine.

The $17,665 Wrangler Sport–our test subject–is a good choice for those who want more power and a higher level of standard equipment. The six-cylinder engine reduces fuel economy by two mpg around town, but it matches the four-cylinder engine's 21 mpg on the highway.

The Sahara comes with more standard equipment, more style and adds $2070 to the bottom line.

Regardless of model, buyers who contemplate off-road use should opt for the gas shock absorbers, locking rear differential, front tow hooks and heavy-duty battery and alternator. Three different tire sizes are available including our tester's huge 30×9.5×15 Goodyears, conceived for hard use in desert conditions. For all around use, especially snow and slush, skinnier tires are a better bet.

The new interior is a huge improvement. A modular instrument panel replaces gauges that were scattered across the front dash. A modern heating and ventilation system replaces the antiquated tacked-on system. New high-back front seats provide improved comfort and lateral support. And the driver looks through a taller–by three inches–windshield, where the wipers no longer rest at half-mast.

This is a small sport-utility. And it's more sport than utility. There's room for either four people or two people and their gear, but not both. For weekend excursions, the best bet is to leave the back-seat passengers behind, flip the rear seat forward or remove it, and head for the hills. There's enough space behind the rear seat for a fly fishing vest, waders, wading boots. Flip the rear seat down and there's plenty of room for a tent, a cooler, camping gear and way too much fishing equipment. It doesn't get much better than this.

Need to haul still more stuff? The Wrangler's modest towing capacity is sufficient for those who need to pull a personal watercraft or snowmobile.

The new Wrangler isn't a luxury car, but it's not the penalty box it used to be. Paved roads seem much smoother. Corners are handled with more dignity. The interstate feels stable at 80 mph. And wet pavement is not to be feared. At the same time, the Wrangler's off-road capability is superior to that of even the legendary Jeep CJ. It's an impressive balancing act.

The Wrangler engineers achieved this balance by designing a coil-spring suspension to replace the Jeep's 50-year-old leaf-spring suspension. And they mounted it onto a rigid new chassis that provides a stable platform for the suspension to do its job. Coil springs provide better handling on and off road and enormous suspension travel.

Greater approach and departure angles mean the new Wrangler can cross trenches and clamber over rocks and fallen trees that would trap the old one. Few vehicles can match the Jeep's rock-climbing ability. At the same time, the new Wrangler feels less like a utility truck when winding down a curvy road.

A cautionary note here. The Wrangler is certainly sporty, but it's not a sports car, a distinction that eludes some drivers–to their frequent dismay. Its handling is competent, but the basic design is essentially truck, with a high center of gravity. Hurrying this or any sport-utility vehicle around tight corners is courting disaster.

While the increased off-road capability has been greeted with enthusiasm by off-road Jeep enthusiasts, the improved ride and handling on the road means you don't have to be a club member to enjoy driving this new Wrangler. There really is only one.