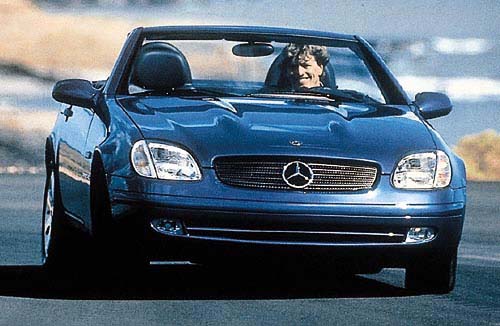 Sports cars have been with us in one form or another for almost as long as there have been internal-combustion engines propelling wheeled vehicles. At various times, the market for them has expanded and contracted; one such period of shrinkage began in the late 1960s, leaving only a few contenders, most of them high-priced, to satisfy the demand of a small but steady market for high-performance two-seaters.

Then came the Mazda Miata. Cute, fun and affordable, it was an instant success. No real psychic ability was needed to see that other small, frisky sporting machines would follow.

Now, there are three new members of the sports-car clan. All three–BMW’s Z3, Porsche’s Boxster and the Mercedes-Benz SLK–are competing in a niche slightly above the Miata, yet below stalwarts in the Jaguar XK8 and Porsche 911 class.

All three newcomers are impressive. All fit into a fairly narrow price window centered at about $40,000, all are well-equipped, and all promise as much over-the-road fun as most drivers can stand. Each carries a company name synonymous with performance, quality and engineering, and each comes from a company with plenty of sports car-building experience.

By the time the first SLKs hit the showroom, the little coupe/roadster had already proven itself good enough to win the North American Car of the Year award. Will it be good enough for you?

Even without the three-pointed star badges, it would be difficult to mistake the SLK for anything but a Mercedes-Benz. It is short but sleek, with a chunky, puroposeful look to it. Nice touches include the faired-in aerodynamic headlights, steeply raked windshield, large rear light clusters and bumpers tucked tightly against the body. Seven-spoke aluminum alloy wheels–carrying different-size tires front and rear–fill the wheel openings, contributing to the SLK's purposeful appearance.

But the SLK's most obvious and unusual exterior feature is its power-operated hardtop. It is standard equipment and, being integrated into the car, eliminates the need for a soft top. Five hydraulic cylinders fed from a trunk-mounted pump raise and lower the lid when the driver operates a single switch. When the top is being lowered, side windows retract, latches on the windshield header are released, the trunk lid is raised (backwards), the roof folds into two halves and slides into its bay, and the trunk lid closes. Naturally, raising the top involves the same steps in reverse.

That's a pretty clever piece of engineering. What makes it more impressive is the fact that there is still some usable trunk space when the lid is lowered–not much, but still about as much as a Miata.

Although there are engine options in Europe, the SLK is available in the U.S. as a single model, fully equipped, and offers a mere handful of options, most desirable among them washers for the headlights. Nothing else is necessary.

Suddenly it's 1955. Mercedes-Benz interior stylists have unabashedly opted for a retro look to the SLK's cozy cockpit. The three circular instruments–one a speedometer, one a tachometer, and the other a combination fuel level/coolant temperature dial–have chrome rings around ivory faces with black numerals and red needles. Shiny accents are applied in numerous places, and a two-tone effect combines black dashboard top, door panels, seat sides, glovebox lid and center console with contrasting trim in the buyer's choice of red, blue, dark gray or light gray.

Our only quibble with this blend of old and new is the carbon fiber insert panel in the dash. We have nothing against carbon fiber, but in a Mercedes it should be the real thing, rather than simulated.

But there is nothing old-fashioned about the SLK's safety features, Beyond the dual airbags, Mercedes has opted to include separate rollover bars behind driver and passenger, as well as adding a circuit to the airbag system that detects a child's seat mounted in the passenger side and disables the dash-mounted bag in front of it.

The seats, too, are modern as can be. No vintage sports car ever had such comfortable and supportive chairs. And no open car of the past protected its occupants from the wind as well as does the SLK's mesh wind deflector, which fits over the rollover bars.

All controls are located in clusters for easy use, air conditioning and a fine Bose six-speaker sound system are standard, and the whole is finished off to the high quality level you'd expect to find in a Mercedes.

A few minutes behind the wheel makes it clear that the SLK's biggest asset is a nearly inexhaustable supply of driving pleasure. The S in the model name denotes Sport, and deservedly so. The fun comes from much more than simple straight-line speed, though the SLK's claimed 0-60 mph time of 7.4 seconds and 143-mph top speed aren't exactly unimpressive. The key word in assessing the car's fun quotient is balance.

At right around 3000 pounds, the SLK isn't exactly a lightweight–even though the L in SLK stands for Licht (light)–but it steers, stops, and goes around corners with far less coaxing than its heavier SL cousins. The all-independent suspension is tuned for flat cornering and precise handling, and delivers exactly that, while also providing a ride that won't rattle your teeth.

Driver and passneger will be as relaxed at the end of an all-day drive as they were at its beginning and, if there were a few twists and turns along the way, the driver will likely have an ear-to-ear grin. Brakes (ABS-equipped), steering and electronic traction control all perform flawlessly.

The third component in the model designation is K, meaning Kompressor (supercharger in English). Without it, the car wouldn't be nearly as much fun to drive. The mechanical supercharger forces air into a 2.3-liter twincam 16-valve four-cylinder engine, the same engine, sans supercharging, used in M-B's C-Class sedans. A variety of high-tech features work with the blower to make the engine both powerful and responsive. Peak power–191 hp–is impressive, but the key to this engine's willingness to play is a wide band of peak torque, available from 2500 to 4800 rpm.

Behind the engine is a five-speed automatic transmission that features “adaptive” electronics that monitor driving style and tailor the shift time and speed to suit. In enthusiastic driving mode, for example, it will shift at the engine's peak power, and will not upshift when the car is slowed for a corner. In more sedate use, it changes gears with remarkable smoothness.

Perfection? Not quite. While the muted whine of the supercharger will be music to some, the exhaust note has a slightly agricultural quality to it. We also found a little more engine vibration than we'd like at cruising speeds, and the absence of a manual transmission isn't consistent with a real sports car image. Mercedes offers a very crisp five-speed manual on European SLK models, but elected not to certify it for the U.S. market.

Many of us have a soft spot in our hearts for traditional sports cars. In quantifiable ways, the new breed, as exemplified by the SLK, is better. Safer, faster, and more environmentally friendly, they represent a high point in automotive design.

Mercedes-Benz has put a lot of value into the SLK, from basic design to sophisticated powertrain to all the standard comfort and convenience features. But we stop short of calling it the best of the new breed. Buyers choose sports cars by subjective measurements, and there are two other new Teutonic roadsters with distinctive personalities of their own.

But if you're interested in any of these seductive newcomers we strongly recommend spending some time with the SLK before making a final decision. It's a unique achievement, even for a company that specializes in the best of everything.