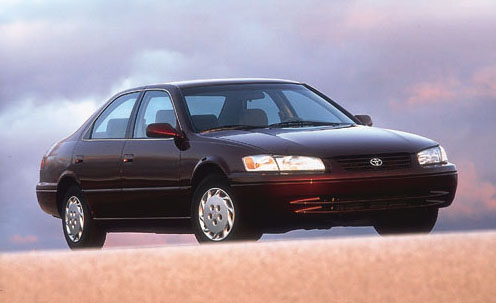 When Toyota launched the fourth generation of its popular sedan last year, the automaker's stated goal was take the Camry, already the benchmark for family sedans, and make it even better. A less-public goal was to make the Camry the best-selling car in America, bumping aside perennial winners Ford Taurus and Honda Accord.

To do so, Toyota devised a simple strategy: Give the car more of everything without sacrificing the traits that made the Camry so successful. The new model was slightly larger, the interior more spacious, the ride and handling more refined, and it sported a longer list of convenience and safety features. Perhaps most important, the price was a few points below comparably equipped '96 models.

It was a smart plan.

One year later, Toyota has met the challenge it set for itself. When sales numbers were tallied at the end of the 1997 model year, Americans had bought 385,814 Camrys, 10 percent more than last year, edging out Accord and Taurus.

With that kind of success, it's not surprising the 1998 Camry offers relatively few changes over the 1997 model. There are, however, several significant improvements, including the availability of side airbags and an engine-immobilizing anti-theft system. These days, even winners can't slack off.

The exterior of the Camry is unchanged from the 1997 model, which offers a sleeker, more prestigious appearance than the modest, rounded shape of the previous generation.

The Camry looks substantial without casting a big shadow. The angular lines stretch the car's profile and give it presence. And yet it doesn't look stuffy. Minimal overhang at the front and rear of the car pushes the wheels to the corners, giving it a sporty, dynamic stance.

At the rear, a tall, square tail improves the car's aerodynamics. The trunk is wide enough to carry golf clubs crosswise, with a broad opening and a comfortably low lift-over height. To further increase cargo capacity, the rear seats fold forward in a 60/40 split. The trunk is fully lined for a clean appearance and less noise transmission into the passenger compartment. The gooseneck hinges on the trunk lid, which intrude slightly into the cargo area, are less than ideal, however.

The Camry is available only as a sedan. The previous generation included coupe and wagon models. A Camry-based coupe is scheduled to appear next year, but the low-volume wagon has disappeared in favor of the all-new Toyota Sienna minivan (see minivan section), which is based on the Camry platform.

Buyers have a wide range of trim levels to choose among. The budget-minded can shop the CE: With a four-cylinder engine and five-speed manual transmission, the CE starts at $17,358. That buys you the Camry's famous reliability and quality, but not a lot else: Air conditioning, cruise control, ABS, power windows and locks, cassette player, and even intermittent wipers are all optional.

Most buyers (about 60 percent) opt for an LE, like the one we tested. All the features missing from the CE that listed above, as well as an automatic transmission, are standard on the LE, which has a base price of $20,638.

The top trim level is the XLE, which starts at $23,048. Standard features on the XLE include a premium audio system with CD player, the engine-immobilizing anti-theft system, aluminum wheels, a more plush interior, and power seats for the driver and passenger.

For about $2300 on any trim level, you can replace the four-cylinder engine with a V6.

The biggest changes on the Camry for 1998 are in the area of safety–a key consideration for family sedan buyers. Side airbags for the front-seat passengers are available for the first time (for $250). Side airbags can reduce the number of abdominal and chest injuries, according to safety experts. The Camry's front airbags have been reduced in force for 1998. Seat belts now come with pretensioners and force-limiters, which boost effectiveness by tightening the belts in an impact, then loosening them slightly to reduce the chance of belt-induced injuries. This combination has been found on luxury models for years, and it's nice to see them on large-volume mid-priced cars.

These enhancements come on top of an already-strong safety package. Antilock brakes are standard on all but the four-cylinder CE model, where they are a $550 option. Traction control is an option on V6-powered cars ($300).

There are three-point safety belts in every position, including the rear center spot. The rear seatbacks are fortified to resist intrusion from objects in the trunk. Indeed, the entire body structure has performed very well in government and insurance industry crash tests.

The interior of the Camry is a light and airy space, with comfortable seats and a low cowl for good visibility. An elegant dashboard houses bright white-on-black instruments. The audio and climate control knobs are simple and within easy reach of driver or passenger and the stereo system is excellent.

Thoughtful amenities abound. A second power outlet is located at the bottom on the front console, next to the built-in tissue dispenser. The sun visors have extension panels. The front cupholders hold 20-ounce bottles, and the rear cupholders can take either juice boxes or cans. There are numerous storage cubbies, and a capacious glovebox.

The interior is roomy, thanks to the Camry's long wheelbase. A generous amount of sound-deadening material makes the interior luxuriously quiet. The radio antenna on all but the CE models is mounted in the rear window to improve reception and reduce wind noise and car wash damage.

The standard powerplant for the Camry is a 133-horsepower 2.2-liter four-cylinder engine that is remarkably smooth. A four-cylinder engine in a car this size is usually a dismal choice, but not here. The 2.2-liter provides acceptable acceleration performance and, once up to speed, keeps the car rolling along nicely. It has to downshift more frequently, and passing on two-lane roads requires more planning than with a larger engine. But the refined 2.2-liter has none of the roughness typical of four-cylinder engines. It's economical to buy and operate, which is why 85 percent of Camry buyers opt for it.

The optional 194-hp 3.0-liter V6, generally recognized as one of the best in the industry, is significantly more powerful. For the extra money, you get a family sedan that will accelerate from 0-60 mph in 8.7 seconds, as opposed to 10.9 seconds for the four-cylinder engine. It provides good performance for passing and accelerates briskly from intersections. You'll have to add premium fuel to the budget, however.

Four-speed electronic automatic transmissions are standard on the LE and XLE models. The ECTi transmission mated to the V6 has an adaptive program responds to individual driving styles. Drive more aggressively and it will delay the shift points for more spirited performance. Leisurely cruise around town and it will shift sooner for smooth, fuel-efficient performance.

In terms of ride and handling, the Camry has always had the poise of a far more expensive sedan, thanks to the underpinnings it shares with the Lexus ES300. Though the car is no sports sedan, it is smooth and competent, giving the driver a confident sense of control.

It's not hard to see why the new Camry was America's best-selling car last year. It is refined, roomy and well-equipped, with a strong resale value and a reliability record other carmakers envy.

The Camry traditionally has been pricey, but Toyota has worked hard to rein in cost; 1998 prices are up less than 2 percent. The competition among mid-size sedans is fierce. Honda has introduced a new Accord. And several attractive competitors are less expensive, notably the Oldsmobile Intrigue and the Pontiac Grand Prix. But if refinement, safety equipment, resale value and reliability are important, the Camry is the leading contender.