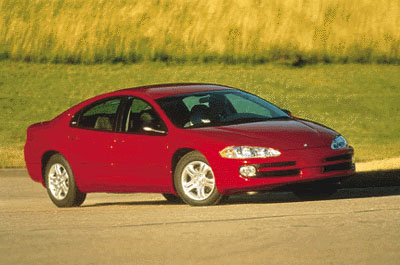 Cutting-edge styling usually comes at a price. You usually get a car that cuts corners somewhere else, like headroom, trunk space or ease of entry. The Dodge Intrepid is an exception to this rule. With its cab-forward design, it looks so futuristic it could have rolled off the set of a science-fiction movie. Yet its provides one of the roomiest interiors in the mid-size class.

Intrepid is just one in a range of midsize sedans from the Chrysler side of DaimlerChrysler, and the most sporty-looking of the group. And fans will be glad to see that with last year’s redesign, there are now very clear distinctions between these various models. The Chrysler Concorde is longer and more conservative, the Chrysler 300M is shorter and more European in design.

But like the original, much more look-alike sedans, the new models make maximum use of cab-forward design. In the case of the Intrepid, the sedan noses into view with an aggressive grille borrowed from the racy Dodge Viper. The sloping cowl sweeps into a steeply raked windshield, over the curvaceous roof and down a decklid reminiscent of past fastbacks. The visual impression is one of kinetic motion.

But looks alone aren’t enough. The original Intrepid had some serious issues for Chrysler to address. Its interior was noticeably noisier than the competition. Its headlights weren’t nearly bright enough. And quality problems plagued early models. On paper, at least, Intrepid’s engineers have addressed these issues. Here’s what we found when we put the car on the road.

The word, “sculpture” comes to mind in describing the new Intrepid. There’s been a tendency among automakers to try to punch up a weak design by bolting on lots of chrome and cladding. Not so with the Intrepid. Instead, there is great nuance to the sheet metal, which rolls and undulates like a work of art.

More important, the new model shows that not only can form follow function, but function can follow form. One of the most frequently heard complaints about the first-generation LH cars was their lack of adequate lighting. Intrepid’s new quad beams provide brilliant illumination as well as a classy styling touch. But these sleek, wrap-around cats-eye lenses flow like water into the sweeping hoodline.

Except for the high-end LHS, the original LH sedans were largely cookie-cutter designs distinguished by only minimal detail changes, such as grilles and headlight shapes. One of the top priorities in developing the second-generation sedans was to give each car its own distinct identity. And we’re not just talking badges and bolt-ons this time. The new cars do not share any sheet metal. Where the slightly longer Chrysler Concorde accentuates elegance, the Intrepid punches the sporty button.

One thing you’ll notice about Chrysler products: They traditionally offer the roomiest interiors in their respective classes. That’s certainly true with the Intrepid. The wheels have been moved farther out toward the corners with the new car, adding both passenger and cargo space.

There’s a cavernous 18 cubic-foot trunk, nearly 2 feet more than the last generation Intrepid. But the numbers don’t tell the whole story. In the original model, the trunk’s gooseneck hinge swung into the cargo compartment, crushing anything in its way. The new hinge folds cleanly out of the way. We do have one complaint about the trunk: There’s a high lift-over, which can strain a small woman or child trying to load up groceries or other cargo.

If you’re familiar with the original Intrepid, you’ll immediately notice an upgrade in the quality of the materials used. The interior of the original Intrepid always lived up to the term “ergonomic,” but there have been notable improvements made this year. The radio is now on top of the heater controls, though both remain within easy reach.

To add to the sporty look of the Intrepid, Dodge designers switched to black on white gauges. We found them a little less pleasant to read under certain lighting conditions. Colors match well, and gaps have been minimized. Nowhere is that more obvious than in the space where doors and dashboard come together. On the old cars, this used to be a yawning chasm.

The Intrepid comes standard with front bucket seats, and these have been much improved in the new model. They provide better back and lateral support and the detailing of the fabric is world class. There’s an optional leather package, as one would expect. There’s also an optional climate control system. One surprise was Chrysler’s decision to do away with the optional integrated child safety seat. Apparently there just weren’t enough takers.

If there’s a downside to the Intrepid’s sleek exterior styling it’s the fact that visibility is slightly reduced. It takes some time to get the feel of the front end to know precisely where the out-of-sight front bumper is. And it takes time to get used to the view out of the small rear window, too.

Often, it’s what you don’t see that matters. While the new Intrepid shares the same basic body architecture of the original sedan, there have been a number of critical changes made to improve torsional rigidity and reduce bending. These include new aluminum cross-beam mounted behind the instrument panel. That translates into less body shake and roll, reduced noise, vibration and harshness, and improved handling. By liberally using aluminum the ’99 Intrepid gains no weight.

To see another big change, lift up the hood. The Intrepid ES comes with a 225-horsepower 3.2-liter V6. This all-aluminum engine was developed specifically for the second-generation sedans. It’s a marked improvement from the dated 3.5-liter powerplant it replaced. Under hard acceleration, the old engine sounded like it was thrashing and running out of breath. The new engine is not only more powerful, it also gets about one mpg better fuel economy.

The Intrepid’s 3.2-liter V6 delivers excellent acceleration performance at all speeds — starting from a standstill or passing at high speeds. This engine is capable of propelling the Intrepid from 0 to 60 mph in about 8.6 seconds. The transmission shifts effectively without hunting for the appropriate gear.

The brakes are excellent, offering quick, predictable stopping power at threshold or ABS levels. ABS is standard on Intrepid ES, optional on Intrepid.

Handling is also excellent. This is an easy car to drive and covering long distances in it is a pleasant experience. The base Intrepid and Intrepid LX come with 15-inch steel wheels and Goodyear Conquest GA tires. The ES and LXi models have 16-inch alloy wheels with Goodyear Eagle GA tires. The bigger tires have notably more grip, particularly in hard cornering and braking maneuvers; the smaller Conquest tires make more noise. The steering is a bit more spongy than we might like, but overall, the new car handles and feels a lot more solid and well-planted than the original Intrepid.

There were plenty of “oohs” and “aahs” when they pulled the wraps off this second-generation Intrepid. Deservedly so. This is a car that’s going to turn heads wherever it goes.

With its powerful engine and stiff body structure, the Dodge Intrepid proves that beauty is more than skin deep. The car is quieter and smoother than the vehicle it replaces. Add that extra room for passenger and plenty of additional cargo space and you come up with a winning combination.

That still leaves the question that has been hanging over Chrysler: can it deliver the type of quality today’s buyers expect? Combine initial survey results along with what we found on our own, week-long test drive and we’re tempted to say, yes. The fit-and-finish and overall feel of the new Intrepid suggests the car is a lot more solid, substantial and reliable than the first-generation sedan-and just as much fun to drive.