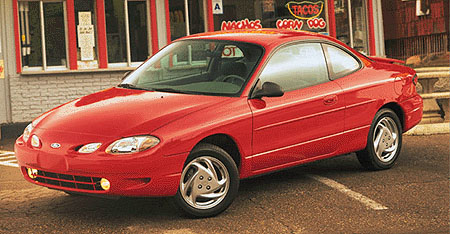 With its rakish design, the Ford Escort ZX2 is one of the hottest-looking compacts on the market. It's a true coupe, not just a sedan with two doors. Yet its handsome interior reveals a roomy back seat and surprisingly large trunk.

Its looks are backed up by responsive handling and excellent road manners. The engine provides substantially more power than what's available in the family-oriented Escort sedans. It's also affordable and economical-a great combination.

Ford's Escort ZX2 doesn't share any body panels with the Escort sedan. Stylish, flowing lines say its owner is someone who's young-probably late-20s to mid-30s-someone who enjoys a night on the town or a weekend in the mountains, someone who works hard and plays hard. Yet it's a practical car, with plenty of room in the back seats for friends.

While the body work is unique, the ZX2 does share its basic structure and dimensions with the Escort sedans. The ZX2 is slightly longer, wider and lower than the sedan, but the distinctions are all within one inch. Their chassis are based on a previous-generation Mazda Protege, a solid, successful design. Ford reinforced this platform for improved safety, better handling and a smoother ride. Not having to start from scratch helped keep the price down.

The ZX2 is a Ford exclusive-it is not available at a Mercury dealership. Cool, Hot and Sport packages give buyers some options, but only one model is available so all ZX2s are mechanically identical.

The Sport option is an appearance package that adds sport seats, a rear spoiler, a leather-wrapped steering wheel and other trim items and upgrades the 14-inch all-season tires to 15-inch Goodyear RS-A tires on aluminum alloy wheels. Suspension tuning is identical between base and Sport ZX2 models; other than the upgraded tires, the Sport package does not increase the performance of the ZX2.

Ford's 2.0-liter twin-cam 16-valve Duratec four-cylinder engine drives the front wheels. This engine came from the Ford Contour, a bigger, heavier car. It produces 130 horsepower-a big step up from the 110-horsepower single overhead-cam engine that comes in the Escort sedans and wagons.

Starting with the Escort design, the ZX2 engineers retuned the suspension, steering and brakes for sportier handling and a slightly firmer ride.

ZX2 comes with the standard safety features, such as dual airbags and side impact protection; we recommend the optional antilock brakes-$400 on our car. Though they shouldn't be confused as a safety feature, the ZX2 comes with 5-mph bumpers, which can reduce the chance of incurring repair bills from minor bumps.

A roomy, attractive cabin makes the ZX2 a comfortable place for long trips. A sporty instrument panel peeks beneath a wedge that sweeps attractively into the door panels. Interior fabrics and materials are of higher quality than some of the other cars in this class, though the inside door handle is on the dainty side. Our ZX2 came with the Sport package's handsome seats, which are firm and supportive. They are a bit lumpy, however, and the small headrest doesn't raise high enough. The driver's seat is height adjustable, a nice extra for shorter drivers.

The rear seats are amazingly comfortable-something you'd never guess by looking at the ZX2's swooping roofline. There's plenty of headroom and legroom for a 5-foot, 10-inch adult.

The 11.8-cubic foot trunk is sizable by compact standards and the rear seats can be folded forward to make room for longer items.

Three cupholders, a center console and heater ducts for the rear seat area add comfort to the interior. Adding more features means paying extra. Our ZX2 came loaded with the $345 Comfort Group, which included map lights and an adjustable steering wheel with conveniently mounted cruise controls. Power windows and locks were another $345. A $295 six-disc CD changer was installed in addition to the in-dash CD player; it's nice to load up on long trips, but takes up valuable real estate in the trunk. The Sport package added another $595.

It pays to read the owner's manual to fully understand Ford's air conditioning system. It senses when the outside temperature is above 50 degrees Fahrenheit and comes on in all but two modes. The system shuts off under hard acceleration to improve performance. At other times, it cycles on and off constantly, which can be a little annoying because it can be felt as a subtle bump through the throttle. It can be turned off by selecting the vent or floor mode.

The ZX2 offers good throttle response and lively acceleration. The Zetec engine is pleasant and willing in all driving situations, with plenty of extra punch for tight passing situations on two-lane highways. The power band of the engine is flexible, providing torque and tractability at lower revs in heavy traffic. A little planning is required when passing on uphill grades at high altitudes, however.

Weighing in at 2,504 pounds, the ZX2 accelerates from 0-60 mph in slightly less than 8 seconds. That measures up well to other leading compacts, including the Honda Civics. The 150-horsepower Neon Sport Coupe is a bit quicker, but not as refined as the Ford ZX2. Fuel economy is rated at 25/33 mpg.

The five-speed gearbox shifts smoothly with ratios that seem well suited to the engine torque. Driving enthusiasts will appreciate the pedals, which are arranged reasonably well for heel-and-toe downshifting.

Steering is precise and handling is responsive. The ride quality is firm, but smooth. The suspension is damped well for soaking up potholes and irregular pavement, but keeps the driver in communication with the road. The ZX2 is nicely balanced and inspires confidence with healthy amounts of understeer at the limit. It's stable at high speeds, even in gusty side winds.

Sporty, quick and fun to drive, the Ford Escort ZX2 is a great choice for active single folks. Roomy rear seats and generous trunk space make it practical for going out on the town or packing up for a cross-country haul.

Its performance may not quite measure up to its aggressive appearance, but the ZX2 compares favorably against its competitors. Its driving fun and top-notch comfort and quality provide a winning blend.