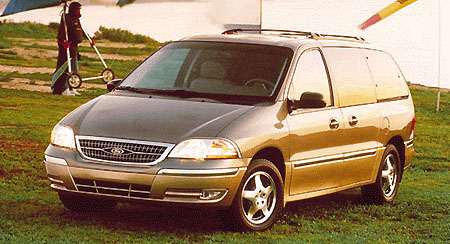 The popularity of a sliding side door on the driver’s side of the Chrysler minivans caught everyone by surprise. Buyers of Ford’s Windstar, the closest competitor to Chrysler’s trio of big minivans, have had to make do with a large optional driver’s door for rear access from the driver’s side.

Those days are over. The newest version of the Windstar gets a second sliding door. What’s more it’s available as a power-operated door. Windstar still rates best in government safety tests and it offers some new features that set it apart from other minivans.

Although the redesigned Windstar is immediately recognizable as a Windstar, it has a fatter and more substantial look to it than the previous model. In actual fact, the new model is slightly shorter and a little wider than previously. Ford designers have shortened the length by giving the minivan a less sleek nose. The top-of-the-line SEL model tested has a chrome-plated grille that gives the vehicle a more luxurious look than before. The width of the vehicle has increased because of bigger fender flares. Unfortunately, the track was not increased so the wheels do not fill the wheel well as well as before — even with the bigger tires fitted on the SEL — and that makes the Windstar look a bit over-bodied.

Ford has adopted Chrysler’s design feature where the runners for the sliding doors are neatly hidden along the lower edge of the rear side window instead of being gouged out of the body side panel. It gives the Windstar a less utilitarian look. The second sliding door is an option on the Windstar LX and standard on the SE and SEL models. Power operation of both doors is also optional on all but the SEL version, where it is standard.

Power-operated doors are a neat feature as it is convenient to be able to open the doors by the remote key fob from a distance, especially if it is raining. It’s also nice for those who find opening and closing the doors a bit strenuous. The one shortcoming is that they move more slowly than manually operated doors which can be closed in no time at all. It takes a few seconds for the electric motor to close the doors. Kids love the power doors, of course. The doors stop closing automatically if any object, such as a kid’s leg, is encountered.

The basic Windstar is sold as a cargo van with just two seats and no carpeting in the rear. It costs just $18,955 and comes with a 3.0-liter V6 engine but does include ABS and dual airbags. The lowest priced wagon with seating for seven starts at $20,800 but still does not include air conditioning, which costs a minimum of $1,075 depending on which option package is ordered. To get the second sliding door, one has to purchase the LX model, which starts at $24,240. Opt for power sliding doors and quickly the price starts rising towards the level of the $30,995 SEL model. (All prices include $580 destination charge.)

The Windstar is only available in one length, making it directly comparable to Chrysler’s extended-wheelbase models (Grand Caravan, Grand Voyager, Town & Country). Windstar’s total interior volume with seats removed is all but identical to these models and the latest Honda Odyssey. Most of the other minivans on the market are smaller.

A substantial, nicely designed dashboard wraps around the driver, positioning the radio and climate controls within easy reach. Two cupholders are attached to a tray that slides out and they accommodate a variety of drinking containers.

A neat overhead console includes storage for sunglasses, coins and a remote garage door opener; a wide-angle mirror helps to keep an eye on the kids. Another unique Ford option is a small voice recorder attached to the sun visor that can be used to record notes and ideas that come to mind while driving.

The SEL tested had an optional center console on the floor between the two front seats. In many ways this is inconvenient as it makes it difficult for adults to walk back to the rear of the vehicle. Of course it doesn’t upset kids as they just clamber over it.

The center row is available either as a pair of seats or as a bench seat that can be positioned on the left or right depending on which door one wants to use for access to the third row. The third row is the usual bench seat for three people. It now comes with small rollers that make it easier to remove, though it still weighs about 100 pounds, making it a two-person job. It is fixed to a track so it can be moved up to 7 inches giving more rear luggage space or rear seat leg room depending on one’s needs for the day. It can also be fixed in the same attachment points in place of the second row of seats, creating five seats and lots of cargo space.

All seat backs fold down to provide a flat space with tables and more cupholders. Rear climate controls are optional as well as rear stereo controls for separate rear use of the cassette while the front is switched to the radio. Kids love the spacious feel throughout the Windstar, while adults appreciate the generous leg and headroom, especially in the center two bucket seats. Access to the rearmost seats is not easy unless the center seat is moved to one side.

Ford sells few Windstars with the base 3.0-liter engine. Its saves less than $1000 on the purchase price, it uses only slightly less fuel but does not perform nearly as well as the 3.8-liter V6. This engine produces 200 horsepower, which puts it right at the top among minivans as one of the best all round performers. If you want a satisfying driving experience opt for the bigger engine.

The acceleration of the Windstar with the 3.8-liter engine is the same as that of a sports hotrod sedan 15 years ago. Even with a full load of passengers the Windstar has enough power for safe passing. At times the transmission shifts a little abruptly but otherwise the vehicle’s powertrain performs smoothly, although it is a little raucous at high revs. Steering is about right with some feedback for those who want to know what’s going on. The ride is smooth thanks to the longest wheelbase of any minivan and it is certainly a lot smoother than in any sport-utility vehicle. Likewise the handling, while not as crisp a sedan, is more stable than an SUV.

The SEL model comes with fatter tires (225/60R16) on bigger wheels than any other Windstar models, which helps improve the handling and stability of the vehicle quite substantially while adding very little noise or ride harshness.

One unique option offered for the first time on a minivan is a reverse sensing system. A beeper sounds at an increasing pace when backing up toward a solid object, such as a parked car or a child on a bicycle. It’s a useful option on a vehicle of this size; rearward visibility is limited because the back of the vehicle is such a long way from the driver.

Overall the Windstar is designed as the ultimate family vehicle with maximum versatility.

Ford has improved it throughout, though the previous model’s only failing was the lack of a second sliding door. While adding the second door, Ford has taken the opportunity to improve safety and emissions. For example, side airbags are available as an option for the first time.

If you can afford to purchase the top-of-the-line model and add optional features such as side airbags and the reverse warning system, you end up with one of the safest, most versatile vehicles on the road. It’s almost too good for the kids — a luxuriously appointed Windstar is more appropriate for taking four to six adults on a long journey or downtown to the opera.