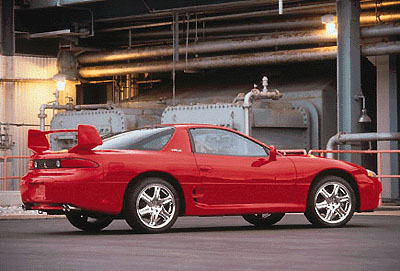 The Mitsubishi 3000GT VR-4 is a neck-snappin’, head-turnin’, pavement-grabbin’, road-shreddin’, turbo-spinnin’, six-gear shiftin’ machine with all the right moves, and all the right curves. This Asian land rocket is an uncommon treat.

They say that while Americans will look at a new car first in profile, the Japanese walk to the front of a vehicle to see its face. From that angle, the 3000GT VR-4 is a howling banshee. The radiator opening is a gaping maw. This mouth is flanked by a pair of functional inlets that feed twin intercoolers. Projector beam headlamps peer out from clear blistered lenses like multiple eyes. Turn signals bulge out like insect eyes. All the better to watch you with, my dear.

From the American angle, there’s a low hood sweeping up to a passenger compartment arched like the cockpit of a fighter plane. It’s an appropriate shape, what with that huge wing mounted on the rear deck that, with the end plates, looks like the tail of a P-38. The chrome 18-inch wheels are flashy; measuring 8.5-inches wide, they are mounted with Z-rated 245/40 Yokohama A-028 tires that are all business. The scoops in front of the rear wheels are phony but the contours break up what would otherwise be a plain surface.

The 3000GT VR-4, however, is four-wheel drive. And it needs all the traction it can get: A twin-turbocharged, twin-intercooled V6 with dual overhead camshafts and four valves per cylinder spins out 320 horsepower at 6000 rpm. Even more impressive is that it produces 315 foot-pounds of torque at just 2500 rpm. All VR-4s come with a German-designed and North Carolina-built Getrag 6-speed manual gearbox.

The VR-4 also has 4-wheel steering. Toe-control links in the rear suspension induce toe-in for greater stability when cornering and under hard braking and acceleration. It does this by adjusting the toe, or alignment, up to 1.5 degrees, steering the rear wheels in the same direction as the front wheels. (This only occurs at 31 mph or faster.)

The four-wheel-drive system consists of a center differential with a limited-slip viscous coupling; the rear differential also uses a viscous coupling. The normal torque split front/rear is 45/55 respectively so that the VR-4 has rear-drive bias under normal conditions. If slip occurs, torque is sent to the tires with greater traction.

Mitsubishi’s 3000GT is a low-slung car with a low roofs and seats that are close to the floor. The doors are long, so getting in or out requires care in tight parking lots. The front bucket seats are deeply bolstered; they adjust seven ways. Headroom for front seat passengers is limited even for those of medium height.

There’s little room for passengers in the rear seats. It’s best to fold the rear seat backs and use the area for luggage; a large lip keeps cargo from rolling forward. This greatly expands the nominal 11.1 cubic feet of cargo room under the hatch.

A large speedometer and tachometer flank a fuel gauge under a single arched binnacle. To the right, three pods reminiscent of those in the Nissan 240Z house engine temperature, oil pressure and turbo boost gauges. Below them are controls for the automatic climate and Mitsubishi/Infinity audio systems, which features a CD player and separate controls on the steering wheel.

The steering wheel, 6-speed shift lever, pedals and seat are well placed for driving with a dead pedal for bracing the left foot. Curves in the hood make it interesting to look over. To the rear, the big wing frames the view; wide B-pillars create some blind spots.

Crack the throttle and Mitsubishi’s 3000GT VR-4 lunges ahead in a way that few other cars will be able to match. By mounting two turbos on the V6, boost and acceleration are immediate above 2500 rpm and this thrust continues right up to the rev limit.

It’s impossible to spin the tires for a dry pavement drag race start with so much traction from the all-wheel-drive. Therefore, finesse is required with the clutch and throttle pedal for quick getaways. Once rolling, the VR-4 accelerates quickly through the gears and the driver must shift quickly to keep up. The shift lever is a stub and the throws are short. There’s some resistance going into each gear and the shift pattern is narrow, so it takes a little experience to avoid missing gears on fast starts.

Fast as it is, the VR-4 is more sports car than dragster. With so much rubber on the road and all-wheel drive, the 3000GT VR-4 digs out of corners regardless of road conditions. A little sand at the apex? No problem. Some runoff flowing across the road? Got it handled. The VR-4 gets a grip on the pavement and won’t let go. No doubt the 4-wheel steering has some effect, though from the driver’s seat it’s impossible to know. Operation is totally transparent. The VR-4 always goes where it’s pointed and the rack-and-pinion steering provides right-now response.

All cars have limits, of course, but the VR-4’s skidpad numbers are up there with the best and there are fewer still that can match its charge out of a corner.

The 3000GT VR-4 is a great touring machine for two. The suspension is firm, but it absorbs expansion joints with aplomb. Wind noise is absent, though some tire noise gets through. The 3000GT is stable under hard braking, a benefit of the four-wheel steering, which maintains alignment of the rear wheels as the rear end of the car raises.

Mitsubishi’s 3000GT VR-4 offers dazzling performance, stellar handling, and aggressive styling. With its high level of performance and so much standard equipment, it’s priced well at $44,600.