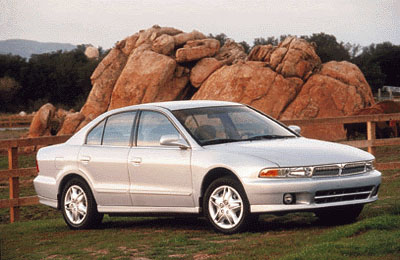 Like so many midsize sedans, the Mitsubishi Galant has suffered from its market proximity to the Honda Accord and Toyota Camry. With those two dominating the scene, it’s hard to avoid anonymity.

We think that’s unfortunate, because the 1999 Mitsubishi Galant compares well when measured against the Accord and Camry. Completely redesigned, the new Galant is quieter, smoother, and more refined in every respect compared to the previous model. Now, for the first time, the lineup offers the option of a V6 engine, providing power parity previously absent.

We drove the new Galant ES V6, which falls in the middle of the Galant range.

Almost every inch of the Galant has been subjected to thorough engineering and/or styling scrutiny. But basic chassis and body dimensions haven’t changed and it remains similar in size to the Accord and Camry.

Like virtually all sedans in this class, the Galant’s appearance is conservative. Nevertheless, the new look, set off by a wide waterfall grille and sculpted sides, is bolder than most, and attention to aerodynamic detail has helped reduce wind noise to a level that’s comparable with the best in the class.

As noted, the V6 is new to the Galant family and, with 195 horsepower and 205 foot-pounds of torque from 3.0 liters, it proved to be a pleasant surprise. We had expected something less robust. Instead, the output of the Mitsubushi V6, a twin-cam, 24-valve design, slots in between the Camry and Accord V6 engines, both of which are regarded as exemplary.

The base engine continues to be Mitsubishi’s familiar 145-hp 2.4-liter dohc 16-valve inline-4, but with refinements aimed at noise and vibration reduction. Successful refinements, we think, based on our California touring.

Similarly, Mitsubishi has improved its integrated engine-automatic transmission controls. Mitsubishi was the first to employ “fuzzy logic” computer programming to allow the drivetrain to better anticipate the driver’s wishes and eliminate the irritating up- and down-shifting that’s still a characteristic of some automatics. The previous iteration of this system was good; the new one is better.

All the Galants presented for our review were equipped with automatics, and that will be the setup when the new cars roll into showrooms this summer. Mitsubishi plans to offer a five-speed manual transmission as standard equipment with 4-cylinder models late this year. All V6 models will have automatic transmissions.

The model lineup is extensive, ranging from the basic 4-cylinder DE, through the ES, ES V6, leather-lined LS, and sportier GTZ. The latter, new to the line, features interior and exterior trim distinctions, including a rear decklid spoiler, plus slightly stiffer suspension components.

Mitsubishi wasn’t prepared to discuss pricing specifics during our early preview drive. However, we estimate the following: the base DE will probably start at about $16,000, including destination charges. The better-equipped ES models–the heart of the Galant lineup–should go from about $18,000, the GTZ from $23,000, and the nothing-to-add LS for about $26,000.

Like its exterior, the new Galant’s inner regions are smooth, contemporary, and nicely laid out. We found the main instrument cluster to be readily visible through the full range of tilt wheel adjustment, and secondary controls generally easy to locate and operate. We do wish Mitsubishi–and others–would step up to the trend for dashboard-mounted (rather than steering column) ignition locks.

The sporty front bucket seats of our test car offered a good range of adjustability with above average side bolsters and thigh support. More important, there’s enough rear seat legroom for three adults, as well as enough rear headroom for six-footers, even with the steeper rake of the rear window. Driver sightlines are average for a car in this class–no significant blind spots, and good forward vision over the sloping hood.

We liked the feel of the thick, padded steering wheel. But we wouldn’t mind seeing slightly bigger controls for the audio system. And the rear center console-mounted cupholders reside below an armrest, which means flipping the armrest back if you want to use it. But these are minor demerits in an otherwise thoughtful design.

We mentioned side airbags, an optional passive safety feature in DE and ES Galants, standard in the LS and GTZ models. Mounted in the sides of the front seat frames, they represent a first for Mitsubishi in the U.S. market, and give the Galant a small edge in passive protection over some of its rivals.

Like all cars today, the new Galant entails improvements in structural rigidity and crashworthiness. On the active-safety side of the ledger, it offers antilock brakes–which we recommend-as standard equipment on ES V6, LS, and GTZ models, optional on the DE and ES.

Beyond its good looks and comfortable interior, the Galants will also include an above-average inventory of standard comfort/convenience features. All models include air conditioning, an AM/FM/cassette audio system, and power windows.

Our experience with the Galant was in Southern California and it included a diverse menu of freeways, wide-open desert two-lane highways, and challenging mountain roads, a mix that produced mostly favorable impressions.

Tops on this list was the performance of the V6 engine, which was uniformly strong, quiet, and eager in all our exercises, including altitudes that topped 5000 feet. Passing performance was brisk, and the responses of the transmission shift control program were right on the money, no matter what we demanded. Nothing fuzzy about this logic, at least in our experience.

Ride quality was also first rate, damping out nasty stretches of pavement very effectively. We were impressed by the noise suppression measures taken in this new car. Most highway and tire noise is transmitted through the suspension, and Mitsubishi has done a very good job of isolating the cabin from the suspension. The new Galant may not be quite as quiet as a Camry, but you’d need an accurate sound meter to measure the difference.

The Galant’s handling traits, including the GTZ, seem to be balanced in favor of comfort over aggressive response. There’s a little more body roll than you’d encounter in an Accord, and the defining characteristic is progressive understeer–the faster the car enters a corner, the less it wants to turn.

However, we found the Galant’s steering to be reasonably accurate, with acceptable road feel once the steering wheel had moved a degree or two off dead center. The Galant is very forgiving to driver errors, such as braking hard in the middle of a turn; while some cars would spin out under these circumstances, we had no trouble controlling the Galant.

Braking–provided by discs up front, drums at the rear, discs all around in V6 models–seemed to be about average for this class. We prefer the superior fade resistance of an all-disc system. On the other hand, we didn’t encounter any fade problems during our driving, despite repeated hard stops.

Mitsubishi has done a very good job of updating a car that was pretty good to begin with. The company would like us to perceive the Galant as a sports sedan, but its suspension tuning feels more like family fare to us.

However, that’s where the money is in the midsize market, and viewed from this perspective we think the new Galant compares very well with the best in the business. It offers a pleasant blend of quiet operation, plentiful power, lots of standard equipment, excellent assembly quality, room for five, and standout good looks at a price we expect to be very competitive.