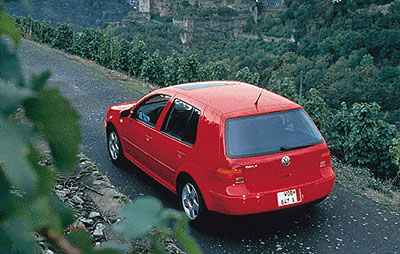 Looks can be deceiving. The latest generation of the venerable Volkswagen Golf is a case in point. The Golf has always been a sturdy, solid, but not very stylish vehicle. And from that standpoint, not much has changed – even though Volkswagen totally redesigned the Golf for 1999. Indeed, from a quick glance, one might think this is a carbon copy of the old car, save for minor modernizations, like the new jewel-like headlamps.

But beauty is only skin deep, and once you get past the Golf's plain vanilla styling, you quickly discover just how much soul the new car has. Slip inside the surprisingly sumptuous interior, then take a test drive, and you're certain to come away with an upbeat impression.

The 1999 Golf is just one more reason why Volkswagen has earned a reputation as the comeback car company. Of course, the Golf was part of the problem in the first place. Volkswagen of America never really recovered from its decision, nearly three decades ago, to pull the plug on the original Beetle. By the early 1990s, VWoA was selling barely a tenth as many cars as it did in the days when the Beetle was America's hot import. It wasn't easy to get excited about VW's line-up, especially considering the carmaker's quality problems. Things got so bad that the automaker briefly pulled the Golf off the market in order to fix things at its Mexican assembly line.

The decision was costly, but effective. Studies show that once production resumed, the automaker's reliability began a steady rise, along with customer satisfaction and owner loyalty. In the latest Total Quality Index released by market research firm Strategic Visions, Volkswagen products won in the Small, Compact and Midsize Car categories. Golf owners, the report noted, were impressed not only with the value they got for their money, but by the Golf's durability.

The '99 Golf is certain to increase the appeal. The car isn't for everyone, of course, certainly not those who place a high priority on styling. And hatchbacks are not an especially popular body style in the U.S. these days. But as we discovered during some extended seat time, this is a car worth considering.

Though the fourth-generation Golf may look a lot like its predecessor, there are some noteworthy changes. On the cosmetic side, the headlights are bigger and more attractively sculptured, smoothly flowing into the new car's sheet metal. There's also a bigger badge. Although subtle, the changes make Golf IV a much more modern-looking automobile.

But what really matters are the changes you might not immediately notice. The new model is 3 inches longer, and rides a wheelbase that's been stretched 1.5 inches. It is 1.6 inches wider and 0.5 inches taller than the last generation. Add to that-in the five-door model-rear doors that makes full use of the changes to improve entry and exit.

The added space is not just for passengers. The Golf gets nearly another cubic foot of cargo space, easily accessible through the rear hatch. What is it about hatchbacks that Americans find so unattractive? In Europe, it's perhaps the most popular body style, and for simple, practical reasons. A hatch gives you many of the functional benefits of a station wagon, improving access, as well as adding more usable height to the cargo compartment. The Golf's rear seat splits, for passing through long items like lumber or skis or fly rods. Folding both rear seats down creates a cavernous space that can handle more luggage than many sport-utility vehicles. A cargo cover shields possessions from prying eyes.

The longer wheelbase and a much stiffer chassis reduces vibration on rough roads and the rigid chassis improves handling in tight corners.

The new Golf comes with an unusually high level of standard equipment, including anti-lock disc brakes and side-impact airbags. There's also an unexpected level of refinement. Forget the grained plastic wood found in many cars. This trim is the real thing. The stylish instrument panel has the look of an aircraft carrier's flight control room, with backlit blue gauges and vibrant red needles.

The Golf's cupholders are well-placed and adequate for most container sizes. There's plenty of storage space, with a large glovebox, deep door pockets and a center tray that's useful for stowing cellular telephones.

During our first day behind the wheel, we clocked close to 200 miles of aggressive driving on the twisty mountain two-lanes between Palm Springs and San Diego. It was a good opportunity not only to test the new car's engine and suspension, but also its seats. In some cars, a day bouncing around these tight-and-twisty roadways can leave you exhausted. But in keeping with the sporty nature of the new Golf, we found its seats firm, contoured and supportive. Unfortunately, we also found the seating controls, especially the recliner wheel, a bit difficult to use, but that's sort of a Volkswagen trademark.

Until now, the only Golf that offered the narrow-angle 2.8-liter V6 as an option was the performance-tuned GTI, so it's a welcome addition to the broader Golf line-up.

We had a chance to take the VR6 version through the mountains. The engine has been tweaked to provide a bit more low end torque. It's still not a rocket off the line, but the powerplant can hold its own on the steepest grades. The next day, we switched off to a 2.0-liter model for the long drive north from San Diego to Santa Barbara. The smaller powertrain is adequate, though not especially inspiring. Throttle feel is a bit light. The four-cylinder engine holds its own in traffic, even at 80 mph, and delivers surprisingly good gas mileage.

But if fuel economy is at the top of your shopping list, consider the 1.9-liter TDI, a turbocharged direct-injection diesel. It's enough to change your mind about oil-burners. Time was when diesels were noisy, smelly and slow. New emissions systems have cleaned up the exhaust scent, and the TDI design is only a shade louder than the 2.0-liter gasoline engine. At highway speeds, you'll barely notice the difference. You do sacrifice some performance, but the improvement in mileage is dramatic.

Handling can be described as sporty plush. One often associates German cars with firm suspensions, but the Golf's gas-filled shocks and coil springs are more compliant than might be expected. Not that this is a problem. With its front MacPherson struts and independent torsion-beam rear, the car remains well-rooted to the road. There's only marginal body roll in aggressive maneuvers.

Standard shoes for the Golf are 15-inch tires, though you can order optional 16-inch rubber. We did find that on certain types of grooved concrete, the base tires had a tendency to feel light. But overall, this is a well-mannered road car.

It wasn't long ago that skeptics wondered whether Volkswagen might pull out of the American market. These days, however, a decidedly bullish Dr. Ferdinand Piech is confidently predicting he'll recreate his company's past glories.

He's got good reason to be optimistic. Volkswagen is rolling out an array of hot new products. The New Beetle has drawn attention from a young and enthusiastic audience. The Passat is winning converts among older, family-oriented buyers. And then there's the Golf. In Europe, the new model regained its position as the number one seller last year and we can see why it's so popular. For American drivers, though, the car's conservative hatchback design may limit demand. That's too bad, for the new Golf is good enough to deserve a closer look.