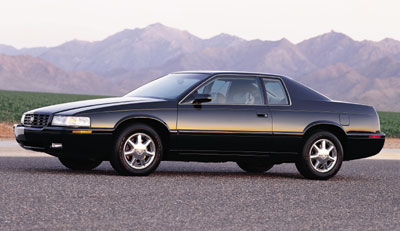 Cadillac Eldorado is powerful and luxurious. The moment you settle into it you know you’re in a Cadillac. The interior practically shouts big, lavish and grandiose. Slam the throttle down and a different breed of Cadillac springs to life. The Eldorado takes off aggressively, surprising you with its vigor.

For 2000, Cadillac has improved its Northstar V8 for lower emissions. Eldorado Touring Coupe gets a new set of wheels this year and replaces chrome with sporty body-colored trim. The ETC logo is revised, while the standard Eldorado has been renamed Eldorado Sport Coupe, or ESC.

The Eldorado looks heavy. Its lines are clean and spare, but the high beltline, huge C-pillar, heavy-looking trunk box and small, bunker-like windows convey an impression of enormous mass. The closer you get, the bigger it seems. With a lengthy 108-inch wheelbase and overall length of 200.6 inches, it is the largest of the mass-market coupes, surpassed only by the now discontinued Lincoln Continental Mark VIII. Body-colored grille and bumpers blend handsomely into the car’s form.

Officially categorized as a mid-size car, the Eldorado has class-leading volume in both the front seat and back seat. The impression created by the enormous trunk box is no illusion: The trunk provides 15 cubic feet of cargo space, far more than other mid-size coupes.

Eldorado’s interior is large, elegant, and generous in appointments. For safety, dual front de-powered airbags are standard. A beautifully sleek band of fine Zebrano wood trim encircles driver and front-seat passenger. The dash is admirably simple and straightforward, with excellent analog instruments. The automatic twilight-sensing headlight system can be adjusted for sensitivity or switched off altogether.

The steering wheel has two paddles, one that controls audio volume and station selection, the other controlling the climate control’s temperature and fan level. The wheel adjusts up and down, but does not telescope fore and aft.

A full multi-task trip computer is mounted on the dash above the console. It computes current cruising range, fuel efficiency, fuel used, average speed, elapsed time, battery voltage, percent of oil-life left — in either English or metric figures. Next to this computer are remote controls for opening the trunk and fuel door. A fine Bose AM/FM/cassette/CD is standard on the ETC (optional in the base Eldorado) with a 12-disc remote changer in the trunk standard. The radio also has a radio data system that will display the station, search for particular kinds of stations or look for traffic bulletins. It can even interrupt tapes and CDs with emergency information.

The heating and air conditioning system delivers readouts for both interior and exterior ambient temperature. A toggle on the lower right allows the front passenger to select separate temperature settings. Rear-seat passengers get their own climate controls as well. Heated seats come on the ETC and they warm quickly, but we found the lower of the two settings too hot for extended periods of time. They are at their best while waiting for the engine and heating system to warm up.

Fog lights are standard, as are two front cupholders. Power outside mirrors have a handy provision that adjusts them downward to the curb when Reverse is selected, helpful when parking this large car. Our test car was furnished with the standard compass in the rearview mirror and an optional overhead garage-door opener ($107).

It all begins with the Eldorado’s well-publicized and deservedly praised 4.6-liter Northstar V8. On the ETC, this engine produces 300 horsepower at 6000 rpm. This is matched by a brawny 295 foot-pounds of torque, though this peak torque comes at a fairly high 4400 rpm, rather than down low, where it would produce even heartier takeoff. Conversely, the Northstar engine used Eldorado Sport Coupe produces 275 horsepower at 5600 rpm and 300 foot-pounds of torque at 4000. For 2000, the Northstar engine features an all-new head design, new intake manifolds, coil-on-plug ignition and rolling cam runners to reduce friction. Pistons, valves, connecting rods and camshafts were changed or updated. All of this was designed to improve fuel efficiency and reduce emissions. It has also resulted in a quieter engine. Now, instead of having to run 93-octane fuel, the engine burns regular unleaded.

In short, this car has lots of power. Eldorado Touring Coupe’s 0-to-60 mph acceleration times are spirited, coming in right at 7 seconds flat. Passing maneuvers from 30 to 70 mph take only about 6.5 seconds, which is very uplifting. The automatic transmission is excellent. It shifts so smoothly that it’s almost undetectable when accelerating gradually.

Like any powerful front-wheel-drive car, the ETC exhibits low-speed torque-steer under full acceleration. Slam down the accelerator pedal from a standstill and you’ll feel a slight tug on the steering wheel. You’ll also get some front wheel spin if you’ve switched the traction control system off. However, traction control is automatically activated each time you start the car. Whenever traction control senses wheel spin, like when you slam down the gas pedal at a stop sign, the system reduces engine torque and lightly applies the brakes to the front wheels. Driven moderately, none of this will be noticed.

Besides traction control, the Eldorado comes standard with anti-lock disc brakes. ABS allows the driver to maintain steering control of the car in an emergency braking situation.

Three other systems are available on the Eldorado: Magnasteer variable-assist steering is standard; CVRSS continuously variable road-sensing suspension is standard on ETC; and StabiliTrak stability control is standard on ETC, optional on ESC.

StabiliTrak uses yaw and lateral-acceleration sensors in conjunction with the suspension, steering and ABS to detect oversteer (fishtailing) or understeer (front-end washout). Immediately upon sensing either of these conditions, StabiliTrak applies braking to the one wheel that can help to regain stability. Several top-line automakers are using these systems now and, presuming the laws of physics haven’t been too grievously violated by the driver, they really work.

The CVRSS suspension is an advanced system that reads the road surface’s roughness and on rougher surfaces automatically adjusts the shock-damping rate of each individual wheel. The result is reduced impact harshness, a smoother ride and more sustained contact with the road during extreme emergency maneuvers. Also on the ETC is a system that automatically adjusts the ABS according to the texture of the road.

Magnasteer actively varies the amount of power-assist given the steering, more at low speeds to decrease steering effort, with increasingly less at higher speeds, where increased steering effort has a steadying effect.

Cadillac has pulled out all the high-tech stops for its Eldorado Touring Coupe. The Northstar engine, the silky smooth transmission and the suspension tuning are first rate.