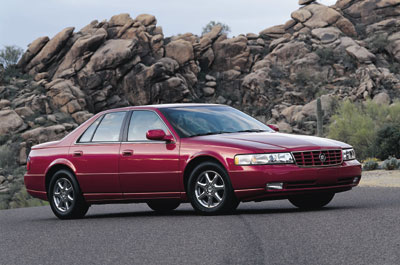 Though a luxury car, Cadillac’s Seville STS feels, at times, like a hot rod. Its muscular good looks are backed up with one of the best powertrains on the market, a 300-horsepower Northstar V8.

The Seville STS and SLS are comfortable luxury sedans, however. They come loaded with features and technology designed to improve comfort, safety and performance. Cadillac’s StabiliTrak system has been significantly enhanced for 2000 and is smart enough to respond to a skid before you’re even aware there’s a problem.

Completely re-engineered for 2000, the Northstar engines for both the STS and SLS models are quieter, cleaner and more efficient than last year.

This latest-generation Seville, launched two years ago, is 3 inches shorter than the previous-generation model. This moves it closer in size to some of its import competitors, making it more attractive as an export to other countries. While the Seville may be shorter, bumper-to-bumper, than before, there’s significantly more useable space, and the 2-inch wider stance enhances ride and handling, especially when coupled to the Seville’s world-class suspension.

The Seville’s interior looks great and is highly functional. The center console, sweeping up into the instrument panel, houses a handsome radio and climate-control center. The look is elegant and expensive. The instrument panel illustrates how Cadillac engineers have been influenced by Lexus. The gauges use a three-dimensional Vacuum Fluorescent, or VF, display that is as easy to read as it is sophisticated.

Cadillac deserves kudos for the tasteful use of richly grained zebrano wood in the Seville. The front bucket seats are among the most comfortable we’ve found in an American luxury car. They are plush, but not overstuffed, with enough lateral support to keep the driver firmly planted when maneuvering the Seville through tight curves, yet the side bolsters are low enough to make getting in and out easy. The front seatbelts are anchored to the seat so they fit more precisely and feel much more comfortable to wear.

Seville offers an optional adaptive seating system that many potential buyers may dismiss out of hand as just another costly gadget. For short commutes and around-town driving, they’d probably be right, but on long drives, the system is comfortable and noticeably less fatiguing. Hidden under the plush leather upholstery are special sensors designed to measure a body’s pressure points and then automatically adjust 10 strategically placed air cells in the seat cushion.

The Bose 4.0 sound system is an example of how Seville makes extensive use of computer technology to enhance both driving attributes and creature comforts. It’s something audiophiles should consider. It punches out nearly 425 watts of music power through its eight speakers, which include a 12-inch subwoofer. The Bose system is smart enough to automatically adjust volume and tone levels to compensate for changing cabin sound conditions.

For 2000, Cadillac is offering a new navigation system that features a five-inch color display with bright, clear graphics centrally located in the instrument panel. Passengers operate the system by touching the screen and following turn-by-turn instructions or referring to the map; the system is integrated into the Bose 4.0 music system and uses CD-ROM to store mapping information.

Another option worth consideration is GM’s OnStar system. OnStar combines cellular technology with a Global Positioning Satellite, or GPS, receiver that constantly tracks the vehicle’s position. No additional cellular contract is needed to use the system. Pressing a button connects you to an OnStar service center that can provide directions, call for a tow truck or remotely unlock the doors if you’ve left the key in the ignition. They can make airline reservations, provide restaurant recommendations, or send flowers for a special occasion. Most important, they will check in on you immediately after an airbag deploys and will summon help to your location if you don’t respond.

For 2000, the Seville uses sensors designed to prevent deployment of the front passenger’s air bag when the seat is empty or a small child is sitting there. According to Cadillac, this system provides safety benefits to children that cannot be realized with dual-stage or multi-stage inflation systems, which deploy with varying degrees of force depending upon the size of the passenger and the severity of the crash. Cadillac’s weight-based sensors and pattern recognition technology can distinguish between a small adult female and a large child strapped into a child safety seat; if it’s a small child, whether in a child safety seat or not, the air bag will not deploy. An indicator light on the rearview mirror tells the driver whether the air bag is enabled or suppressed. (Cadillac still recommends the back seat as the safest place for children, but its research indicates that people want, when absolutely necessary, the ability to properly restrain children in the front seat.)

Driving is where the Seville shines. Seville’s Northstar 4.6-liter V8 has plenty of torque for off-the-line acceleration and enough horsepower to maintain pace on Germany’s Autobahn.

The Northstar engine is tuned differently for the SLS and STS models: The version used in the SLS produces 275 horsepower at 5600 rpm and 300 foot-pounds of torque at 4000. The engine in the STS delivers 300 horsepower at 6000 and 295 foot-pounds of torque at 4400 rpm. That makes the STS the better choice for drivers who want a high-performance luxury sports sedan and the SLS better for drivers who prefer quietly cruising in luxury. The redline is 6500 rpm in the SLS, 6700 rpm in the STS.

For 2000, the Northstar engine features an all-new head design, new intake manifolds, coil-on-plug ignition and rolling cam runners to reduce friction. Pistons, valves, connecting rods and camshafts were changed or updated. All of this was designed to improve fuel efficiency and reduce emissions. It has also resulted in a quieter engine. Now, instead of having to run 93-octane fuel, the engine burns regular unleaded.

Cadillac’s four-speed automatic transmission features a Performance Shift Algorithm that analyzes your driving style and adjusts shifting appropriately. Hammer the throttle and it mimics the crisp shifts of a manual transmission. Accelerate gradually and the transmission shifts smoothly. Go through a corner under hard acceleration and the system is smart enough to delay shifting until you are through the turn for improved handling balance.

Standard on both models is the StabiliTrak system. It uses a special accelerometer to sense even a minor skid. Then, by applying the brakes to individual front wheels and deftly controlling the throttle, it brings the car back under the control-often before you noticed anything was wrong. Seville’s steering system is linked to the system’s sensors. As a result, steering effort is altered according to how aggressively a driver takes a corner.

For 2000, the third generation of this system raises steering effort in low-traction or emergency-maneuver situations to enhance driver control. Also added this year is side slip-rate control: If the Seville is sliding sideways, both front brakes are momentarily applied to slow the vehicle and allow it to regain stability and lateral traction.

Now add in the Continuously Variable Road Sensing Suspension, a standard feature on all Seville models. The system responds to changing road conditions to optimize ride and handling; it alters shock-damping rates to find an optimal balance between comfort and handling.

Cadillac Seville is a credible contender for those seeking an American luxury sedan that delivers the refinement, performance and handling expected from a BMW, Mercedes-Benz, Lexus or Infiniti. The Seville is a sedan that truly loves to be driven, whether you’re winding down back roads or commuting through traffic with the Bose sound system on.