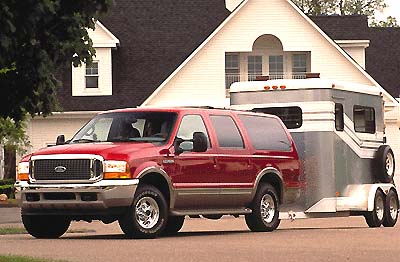 Everyone likes to joke about the new Ford Excursion. It is, indeed, the biggest sport-utility vehicle on a planet chock full of SUVs. Its size has drawn sharp criticism from some quarters, charging it with lackluster fuel economy. But the Excursion is no larger than the hundreds of thousands of Ford Super Duty pickups that share its platform. And there are, indeed, some folks who can put a giant sport-utility vehicle to use. They tow heavy trailers, haul bunches of people and move acres of cargo. So who are we to judge? We’re here to evaluate, not judge. Besides, we like the Excursion.

Ford did an excellent job on this vehicle. It rides impressively well for a three-quarter ton truck. It is capable of carrying an enormous amount of cargo. Six people and their baggage can travel in supreme comfort; eight or nine people can be belted in when necessary. Best of all, the Excursion provides an exceedingly stable platform for pulling trailers of up to 10,000 pounds.

Ford’s new Excursion comes in two levels of trim, XLT and Limited. XLT sports a nice cloth interior with comfortable seats that offer good support for long drives and a high level of standard equipment. The Limited trim adds leather and a few more goodies that are optional on the XLT.

Based on Ford’s new Super Duty F-Series pickup trucks, the 2000 Excursion is more than seven inches longer than the Chevy Suburban, the former SUV heavyweight. Inside is a comfortable interior. It doesn’t matter whether you’re sitting in the front seats, second row or third row, all of the seats off generous legroom, headroom and elbow room. The dash is attractive and well-designed and all of the controls are easy to find and operate.

Excursion’s rear cargo doors are split three ways. You can swing the glass hatch up for quick access to gear. This same glass hatch offers much better visibility rearward while driving than traditional split doors. The rear doors are half height, like Dutch doors. Split in the middle, they can be opened when you’ve got a trailer attached and can be swung nearly 180 degrees for easier access.

If you drive off the pavement or on snow-covered roads, you’ll want to opt for the $250 limited-slip, the $255 all-terrain tires, and the $75 skid plate. Optional $60 trailer mirrors feature little convex mirrors at the bottom that eliminate blind spots. Ford says the Class IV receiver hitch, which comes standard, is designed to prevent smaller cars from going underneath the rear bumper, while a specially designed BlockerBeam is designed to accomplish the same goal up front.

The Excursion comes with a nicely designed interior. The seats are comfortable and, unlike the Ford Expedition, there’s lots of legroom and headroom in the Excursion whether you’re in a first-, second- or third-row seat. Six adults can ride in comfort with 48 cubic feet of cargo space left behind them. For shorter trips, like going to a restaurant, the Excursion can seat eight people — or nine if you order the front bench instead of the bucket seats.

Remove the third-row bench seat, and the Excursion can carry four or five people and a lot of gear. Removing the third-row seat is easy: Flip the seatback forward, yank a bar at the foot of the seat and pull the seat toward the rear of the vehicle; it glides along on rollers. The seat weighs 75 pounds, but in short order I pulled it out and threw it into the back of another SUV on a cold Montana morning.

Set up as a two-seater, the Excursion can carry an outlandish amount of cargo. A sheet of plywood slides in easy and lays flat on the floor. Two people could sleep in comfort on the huge, flat cargo area. Believe it or not, we managed to fill an Excursion. We were finishing up a three-day float down Oregon’s Deschutes River. As planned, the river guide in charge of setting up camp had arrived at our vehicles ahead of us. He quickly stuffed all of the supplies from base camp and enough fishing equipment for eight people inside. When he was done stuffing, only seating for two remained and the rear-view mirror was rendered useless. Granted, he could have packed more efficiently, but he was grateful for such a large storage container. After reorganizing the equipment and putting some of it into another vehicle, six of us piled into the Excursion and made the long trip back to the Portland area. Cruising along steadily with this load, the Excursion demonstrated its virtues of size, stability and power. The weary group of fishermen sang its praises all the way back to Portland.

Cruising along in an Excursion gives you a secure feeling. It’s smooth and quiet. The V10 is a delightful engine. It produces 310 horsepower and can propel the Excursion along the Interstate at high rates of speed. The V10 generates a very impressive 425 foot-pounds of torque at 3250 rpm. Tell someone you’ve got a V10 and they think you’re driving a rocket. But an Excursion 4×4 weighs about 7,200-pounds, so its acceleration performance at high altitudes seems no better than an Explorer or Expedition. Still, it had no trouble passing other vehicles on two-lane roads near Yellowstone. It’s rock solid at 97 mph where a governor keeps you from going any faster. The EPA doesn’t even rate trucks this big, but you should expect fuel economy in the 10-12 mpg range and we’ve seen 14 mpg on the highway.

If you like diesel engines, you’ll love Ford’s turbocharged 7.3-liter Power Stroke. It seems unaffected by high altitude and I was amazed at its ability to accelerate past slower cars on two-lane roads. The diesel generates 500 foot-pounds of torque at just 1600 rpm, useful for pulling stumps out of your yard or pulling heavy trailers up steep ramps. Ford worked hard to reduce noise from the diesel both inside and outside the Excursion; but you still shouldn’t expect to sneak up on anyone. The diesel gets 16-18 mpg, but adds $4,000 to the bottom line. It takes a lot of long-distance driving to justify that. All Excursions come with a 44-gallon fuel tank, giving the diesel a range of more than 700 miles.

A few Excursions will be available with 5.4-liter V8s, but I suspect they would struggle if you loaded six passengers and luggage and headed for the mountains. It’s a big station wagon for the flatlands or an economical engine for fleets.

While the 4×2 comes with Ford’s Twin I-beam front suspension and coil springs, the 4×4 uses a solid front axle and leaf springs. Differences in ride and handling between the two are subtle. The 4×4 rides and handles superbly, tackling corners with confidence and offering good grip on dirt roads. Strong crosswinds in the Madison River Valley and an 18-wheeler going in the opposite direction had little effect at high speed.

Of course, that long wheelbase means this is not a serious off-road vehicle. But the part-time four-wheel-drive system and 8.1-inch ground clearance should get you up some pretty gnarly dirt roads in nasty weather. The Excursion does not offer a system like GM’s Autotrac, which distributes torque front to rear automatically, so you may have to slow down for slushy, inconsistent conditions. But Ford’s clever vacuum-controlled hub-locking system quickly engages four-wheel drive on the fly by pressing a button. A low-range set of gears is ready whenever you need to tackle steep, slippery terrain.

Perhaps most important, the Excursion is rated to tow trailers up to 10,000 pounds, so six fishermen could pull a hefty boat behind them. All Excursions come ready to tow, with a Class IV receiver hitch and factory-wired seven-pin electrical connector; a four-pin adapter is also included. I like overkill when towing long distances through bad weather and the Excursion should pull a 6,000-pound trailer better than an Expedition. Unlike most SUVs, all Excursions come with D load range light-truck tires, LT265/75R-16D. You may want the all-terrain treads if you drive on muddy trails, but the all-season tires are smoother and quieter for towing long distances.

There’s no getting around the fact that this is a big vehicle and it’s size was a bit more apparent in downtown Portland. However, if you don’t mind big rigs, then you’ll find this one surprisingly maneuverable and easy to park.

Ford’s new Excursion is the king of big sport-utilities. Supremely stable, it feels safe and secure on the open highway. Whether you’ve got a lot of cargo to carry, a bunch of people to transport, a big trailer to pull or all of the above, the Excursion is ready for whatever you throw its way.