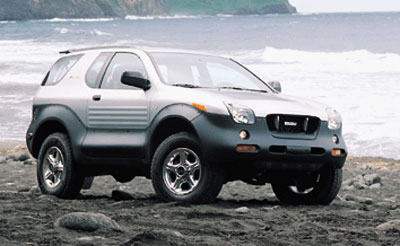 If you’re looking for a sport-utility vehicle that immediately sets you apart from the crowd, you don’t have to go much further than the Isuzu VehiCROSS. This show-stopper began life several years ago as a concept car that was popular among auto show visitors. It was launched as a production vehicle for 1999.

The VehiCROSS name seems designed to position this macho machine as the functional equivalent of a cross-training sneaker, and indeed, it’s got the appropriate mechanical credentials for serious on and off-road driving. But the most remarkable aspect of the vehicle is its daring styling. The VehiCROSS has a Star Wars quality to it, as if Darth Vader penned the design.

This radical appearance extends to the unexpectedly spacious interior, but it does create some compromises a potential buyer should consider, particularly when it comes to limited rear visibility. Overall, however, the VehiCROSS brandishes serious defining character in an increasingly crowded and homogenous SUV market.

VehiCROSS is a three-door sport-utility available in one basic flavor. However, you can also order a special Ironman package with the trademark logo of that famous triathlon on the hood, C-pillar and tailgate, and embroidered into the seats and floor mats. The basic VehiCROSS goes for $28,900, while the Ironman model adds another $995. To these prices add $695 for dealer destination charges.

The VehiCROSS traces its roots to the 1993 Tokyo Motor Show, where it debuted to wild acclaim as one of event’s most striking concept vehicles. Typically, when automakers put these prototypes into production, they manage to strain out the most distinctive elements that enchanted show goers in the first place. That clearly didn’t happen here. The VehiCROSS at your local dealer is every bit as striking as the original concept vehicle.

That means the VehiCROSS is anything but anonymous. Slide into a parking spot at the grocery store or mall, and you’ll quickly find yourself surrounded by a crowd of curious onlookers.

One strong design element is the headlights; shaped like snake-eyes, they look like jewels. But the overall appearance is a bit campy. VehiCROSS is different, and attractive, but a little difficult to take too seriously. Maybe it’s the bulge on the rear hatch that serves to conceal the spare tire. Or the hefty black polypropylene side cladding that is held in place with exposed machine bolts. Nearly 67 inches tall, the VehiCROSS sits so tall on its haunches, with 8.5 inches of ground clearance, that it looks like a spaceship ready to lift off. Even the aero-styled fuel door is designed to further enhance that sci-fi quality.

The flamboyance continues inside. Imagine what it would look like if the Jetsons wore saddle shoes, and you’ll end up with something close to the appearance of the red and black leather interior. The Recaro seats are not only comfortably firm — with full bolsters to keep you planted in place — but they also enhance the VehiCROSS’s visual statement. This statement is further reinforced by faux carbon-fiber door panels. We found the instrument panel especially appealing, particularly the way the graphics on the speedometer and tachometer changed to high-contrast amber when lit up at night.

We do have a few bones to pick about the interior layout, where it seems like more design creativity went into style than function. For all of the interior room, we found this SUV unexpectedly bereft of usable storage space. More pockets and bins for stashing stuff would be useful. My cell phone to be proved a particular problem. I wound up tossing it into the passenger seat — and picking it up off the floor whenever I made a hard stop. Also, the radio buttons are small. The interior door handle is awkward, while the exterior door handle is hard to grab and will snap away from your hand if you’re in too much of a hurry. And we could not figure out how to open the tailgate without using the key.

Perhaps a more serious concern is the issue of rear visibility. There isn’t much of an opening to begin with in the rear hatchback, and the spare tire obstructs the center of the window to the point where you may not notice a smaller car driving behind you. The Japanese version of the VehiCROSS solves this problem in two ways: First, its side view mirrors are mounted on the fenders rather than the doors, a tradition in Japan. Even more effective is a tiny camera that captures the view out back and projects it on a small monitor mounted in the center of the dash. We’d love to see that feature added to the U.S. model.

Though we didn’t get a chance to thrash our test model, Isuzu seems to have backed up the VehiCROSS’s macho visual message with respectable off-road performance. Under the skin, this stylish sport-utility borrows many basic components from the Japanese-market 3-door Trooper. The front suspension uses unequal-length control arms and torsion-bar springs, while the rear uses a four-link live rear axle setup with coil springs. Thick anti-roll bars are mounted front and rear for improved handling on the road. Aerospace-grade aluminum monotube shocks use heat-expansion chambers, making them almost impossible to overheat. This means you shouldn’t lose shock damping no matter how rough the road. Furthermore, VehiCROSS’s approach and departure angles (the available ground clearance front and rear for climbing over and descending large obstacles) are impressive, allowing the vehicle to traverse some seriously rugged terrain.

At 3955 pounds, the VehiCROSS is surprisingly hefty, nearly 1000 pounds heavier than the similarly sized Toyota RAV-4. But this is, of course, a true body-on-frame truck, not a unit-body car.

To move all that mass, there’s a 3.5-liter V6 with a computer-controlled induction system helping to boost output to 215 horsepower at 5400 rpm and 230 foot-pounds of torque. The engine is mated to a 4-speed automatic and a Borg-Warner Torque-On-Demand system with a standard limited-slip differential. The system is smart enough to shift torque around even before your wheels start to slip. The powertrain does its work through a set of Bridgestone P245/70R-16 mud and snow tires.

It may look like a rocket, but VehiCROSS takes nearly 9 seconds to go from 0 to 60 mph. That’s not slow by SUV standards, but it won’t keep up with a Jeep Grand Cherokee Laredo (one of the quickest SUVs).

The wheelbase, at 91.8 inches, is nearly two inches shorter than a standard Cherokee, and you’ll notice the difference on rutted roads, like those in Michigan where I drove the VehiCROSS. With its rugged suspension, VehiCROSS rides rough and has a tendency to pogo on rough roads. On smoother roads, however, it delivers a solid and stable ride.

The VehiCROSS handles amazingly well on winding roads given its ground clearance and off-road orientation. VehiCROSS’s rack-and-pinion steering is unexpectedly sharp, crisp and responsive. Despite the height of this vehicle, it provides a comforting sense of stability through even the sharpest corners.

Isuzu’s Torque-On-Demand all-wheel-drive system adds to that stability by constantly redistributing power to whichever tires offer the best grip. The system continually evaluates the speeds of the front and rear axles, throttle position and brake application. Stab the throttle in the middle of a quick, tight corner and it doesn’t upset the handling. Of course, this system really shines when driving on slippery surfaces, such as dirt, snow or wet pavement.

Isuzu’s VehiCROSS handles great on smooth roads. Once underway, it offers plenty of power for quick acceleration. The sophisticated Torque-On-Demand four-wheel-drive system adds to its stability in corners.

With nearly every major manufacturer offering an SUV, there’s a lot to choose from. If you want to be different, you’d have a hard time finding a vehicle that outshines the Isuzu VehiCROSS. There are some tradeoffs, especially when it comes to rear visibility. But on-road or off, this unique, competent and aggressive machine is certainly worth considering.