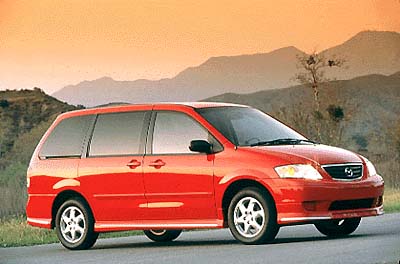 Each time an automaker comes out with a new or revised minivan they seem to make sure that they add a first. This all-new Mazda MPV has power wind-up windows in each of the two sliding side doors – a first on a minivan. Besides that, the new MPV is a fairly conventional minivan. It has front-drive, a V6 engine and can hold up to six people.

Mazda’s all-new MPV is smaller than most minivans on the US market, giving it better handling as well as making it more maneuverable in tight confines. This makes it an ideal choice for someone who wants the conveniences of a minivan but does not need the passenger- or cargo-carrying capacity of larger minivans.

The price of the base MPV DX starts at $19,995 and includes air conditioning, automatic transmission, front airbags, variable power assist steering, a good radio/CD stereo system and other features one expects on a decently equipped vehicle.

In order to get power windows and power door locks as well as cruise control one has to order the Power package for $1,325 or move up to the LX model at $22,050.

The top-of-the-line ES model ($25,550) adds items such as leather seating surfaces, bigger 16-inch alloy wheels, an upgraded sound system, remote keyless entry system, front and rear air conditioning and side-impact airbags for the front seats. The GFX package costs $900 or $1200 depending on the trim level and/or other packages ordered.

The Mazda MPV might not win any awards for being the sleekest looking minivan but it does have a neat appearance with a purposeful nose that almost makes the vehicle look more like a large station wagon rather than a minivan. The grille blends in well with the aerodynamic headlight covers that lead into the body creases. Following the lead of other minivans, the sliding door-rail track is hidden along the lower edge of the rear side windows. Overall the MPV looks somewhat slab-sided and chunky compared to other slicker minivans. For some buyers, the vehicle’s looks can be improved with the GFX option that adds spoilers and side sill extensions to the lower body panels. The lower edge of the front spoiler on the GFX option flows all the way to the back spoiler via a side skirt that runs the length of the vehicle on each side.

The interior of a minivan is obviously its most important feature and the MPV does well in this department. Starting at the back, the rear bench seat can be folded down into a well in the floor freeing up 17 cubic feet of storage space. This is a very useful feature (also found on the Honda Odyssey) as it is so much easier than trying to remove the rear seats. In addition the bench seat can be tipped back so that it can serve as picnic seat for a couple of people who might want to have a tailgate party. With the rear seat in its regular position, the empty well serves as a useful storage area that retains cargo better than a purely flat floor.

The individual center seats can be folded down and can slide a few inches on a runner for increasing rear leg space. What’s more, they can also be moved sideways (another industry first) to create a bench seat and improve access to the rear seats. They can also easily be removed as they weigh only 37 lbs. each. The variations on seating allow for two, three, four or five rear seats depending on a family’s needs in cargo or passenger carrying. The comfort of each seat tends to diminish as one moves from the front row through to the rear bench seat, which is a bit hard and upright for comfort on a long journey. Tall passengers will find leg and head room adequate throughout. Optional rear air conditioning can be controlled individually by each passenger allowing as much comfort for him or her as for front seat occupants.

Access to the vehicle is not quite as convenient as in bigger minivans as the doors are smaller and the step-in height is slightly higher. The sliding side doors are manual only, with no power option available.

The dashboard has a pleasantly smooth finish to it that is more reminiscent of a car, flowing as it does across the width of the vehicle in a single arc of non-reflective material. The test model came with the optional wood grain finish which helps set off the instrument panel giving it an almost luxury look. The instrument pod is nicely situated with a large speedometer located right in front of the steering wheel and a smaller tachometer to the right.

The radio and climate controls are placed high up in the center, leaving plenty of space for a couple of storage bins underneath. However some of the radio buttons are obscured by the large gearshift lever while driving. Talking of storage, there are several storage bins and plenty of cupholders to cater for the inevitable amount of time that is spent in a minivan. An auxiliary 12-volt outlet in the rear side panel is provided for electric accessories.

Despite its smaller size, the MPV’s acceleration performance is not as good as it might be as it is powered by a relatively small 2.5-liter engine. Undoubtedly in the rest of the world, where it is sold with a manual transmission, it performs adequately but when coupled with the standard four-speed automatic transmission in the U.S. model it has to work that much harder. The engine lacks low-end torque, which means it needs revving more to get the power required for passing or entering a freeway onramp. Having said that, the engine’s power output is perfectly sufficient for keeping up with traffic in most situations, especially when not fully laden. At cruising speeds the vehicle is quiet with little wind noise.

It’s handling is somewhat better than most minivans especially when fitted with the 16-inch wheels and tires. This shows most on the highway where the vehicle takes curves without a murmur, although there is inevitably some body roll. The ride is firm without being harsh. The rack-and-pinion steering gives a precise feel to the steering and its power varies acquiring to engine speed, although it is not as precise at speed on the freeways as it might be. The MPV might not perform or handle like a sporty station wagon, but it is much better than an SUV.

Even after their children have left home, more and more people are finding it hard to give up the carrying capacity and convenience of a minivan. The Mazda MPV is perhaps the ideal type of minivan for so-called empty nesters. It offers a more refined ride and its smaller overall size makes it easier to handle. The opening windows in the side doors are what an adult rear-seat passenger expects in a vehicle and the rear tumbledown seat is really convenient – both in increasing cargo space and as a rear facing bench seat for a tailgate party.

The MPV is a logical step up from a station wagon for someone who wants more interior space and greater ride height without the harsh ride and poor handling of a SUV.