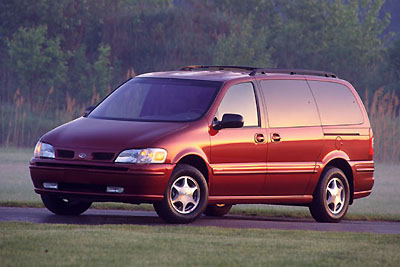 Oldsmobile’s Silhouette is a highly refined minivan. It handles well and is actually fun to hustle down a challenging road. With its long wheelbase, the Silhouette seats seven comfortably and comes with thoughtful interior touches that make trips with kids go easier. The Premieree edition features a state-of-the-art video entertainment system.

Oldsmobile Silhouette is available in three models: GL, GLS and Premieree. The GL retails for $24,990, while the loaded GLS goes for $28,640. (The short-wheelbase GS has been discontinued.) A firmer suspension with automatic leveling is a $270 option on the GLS, but is standard on the Premieree.

Silhouette Premieree, like the one we drove, retails for $31,550. It comes with a well-integrated video entertainment system for rear-seat passengers that is not available on the other models. Almost every option you can get on a Silhouette comes standard on the Premieree edition. Our test car, however, had the $195 heated front seats, a boon for chilly mornings or lower back pain. Other options are gold trim pieces for $150 and a $100 towing package that increases the pulling capability of the Silhouette from 2000 to 3500 pounds. Northerners will appreciate an engine heater that adds a mere $20.

Oldsmobile’s minivan offers the same dimensions as the Chevrolet Venture and Pontiac Montana. All Silhouette models get two sliding passenger doors as standard equipment. Curbside doors on the GLS and Premieree Edition are power-operated, convenient for unloading the munchkins. (In the base GL, the motorized door is an option.)

Just one powertrain is available: a 185-horsepower 3.4-liter V6 attached to a four-speed automatic transmission that powers the front wheels. This type of layout is common to all the best-selling minivans. The engine sits in the usual sideways position, which allows maximum use of interior space.

The Silhouette is a great vehicle for big families. Extended and multi-generation family units are encouraged to enter the Silhouette, which coddles and comforts its occupants. Each seating position has been attended to with bins and cubbies and cupholders.

In the Premieree edition, there are six rear headphone jacks so Junior and Grandpa won’t have to listen to the same tunes. The Premieree comes with two buckets in the front, two in the middle row, and a split bench in the third row that will hold three adults.

Head and elbow room are generous in all seats, yet tall folks’ knees tend to ride high in the middle row. The middle buckets in our test minivan would not recline fully unless they were at their most forward positions, which discourages adult naptime when the van is moving. The third-row seats are perched a bit taller than the middle row, so the view forward is clear. Moms tell us that smaller children mounted at such heights are entertained — and therefore remain quieter — by what they can see out the windows. GL models come with mounts for three bucket seats in the middle row, allowing it to seat up to eight people. You can also get a 60/40 split bench for the middle row of the GL that carries two adults or two little ones in built-in child seats.

The seats fold and remove easily. Handy little pictograms on the frames underneath the seats instruct you how to unlatch them from the floor. They are the lightest seats in the business, so removing them is worthwhile when you need greater cargo capacity. However, they are heavy enough that an adult or strong adolescent is best entrusted with moving them across the minivan’s floor and into your garage.

There’s enough cargo space for six suitcases, but you’ll have to use the roof rack if you want to cross the country with the six big folks that the comfortable seats invite.

Our Premieree came with smooth leather seating surfaces, but otherwise looks the same inside as the lower-line Silhouettes or the Chevrolet Venture or Pontiac Montana. The dashboard is neatly arranged, except the CD and VHS videotape players are mounted on the floor, a long reach from the driver. The gauges are easy to read, and other controls are intuitive — once you get used to the door switches in the overhead console. The middle buckets and rear bench seats are surprisingly form-fitting even though they look like simple, flat benches.

The Premieree edition’s video entertainment center consists of a 5.6-inch flat-panel color monitor screen that folds down from the ceiling behind the two front-seat occupants. About a foot behind this screen is another ceiling console that houses four separate small panels with knobs and jacks. On the far left panel are two knobs for additional rear seat heating and cooling. On the far right are controls that operate the in-dash stereo through headphones. This way the driver can cruise along in relative silence while the rear-seat passengers switch stations, or play cassettes or CDs. One panel overhead houses input jacks for Nintendo, Sega Genesis, or Sony Play Station video game machines that play on the flip-down monitor. The remaining panel contains headphone jacks and volume controls for videotapes that are played on the monitor. The tapes are inserted by the driver, but can be controlled by a remote from the rear seats.

This all sounds like complex integration, but the end result is simple: No matter where you sit, you can enjoy your own form of entertainment. All of the systems can be overridden by the boss in the driver’s seat, which is helpful for parents issuing time-outs to over-enthusiastic kids.

GM’s V6 engine is a powerful workhorse with good throttle response and efficiency. It produces strong low-rpm torque for quick acceleration, even when loaded down. You can feel the engine growl slightly through the steering wheel. Traction control is optional, and is a good idea for easier control in winter driving. Without traction control engaged, you can spin one front wheel during a spirited take-off. With a powerful V6 and front-wheel drive, torque steer is sometimes noticeable — a slight tug on the steering wheel under hard acceleration. Though it works well, the output of GM’s V6 is less than that available in Ford, Chrysler, Honda and Toyota minivans. The four-speed automatic is programmed to shift up as soon as possible, which improves fuel economy but makes it less fun to drive.

Oldsmobile’s Silhouette does a better job of filtering road vibration than Pontiac’s Montana or Chevy’s Venture. Perhaps the touring tires of the Premieree we drove are tuned for less harshness. These same tires likely contribute to the Premieree feeling a little less grippy in corners; body lean is also more noticeable in the Silhouette than in the Montana.

The brake pedal of the Silhouette feels spongy, especially when you compare it to Oldsmobile’s more modern sedans, such as the Alero, Intrigue, and Aurora. The anti-lock brake system, however, works well, with steady and unobtrusive feedback when it’s engaged on slick surfaces.

The Oldsmobile Silhouette makes all occupants feel they have control over their personal space, with spots for drinks, trinkets, and volume controls for headphones. You could live in here if you had to, and it sometimes seems that way when you’re stuck on the 405 in Los Angeles, shuttling distractible youths to after-school Tai Chi lessons.

We’ve driven minivans with aftermarket video and television setups, and none of them match the sound quality, picture quality, and ease of operation found in the Premieree edition. The GLS model gets most of the same equipment without the video system for $2,910 less. That makes the video system an expensive option and the Premieree Edition a relatively expensive model.

With or without video, the Silhouette is fun to drive. It rides and handles better than the previous generation of minivans from GM and is an excellent choice.