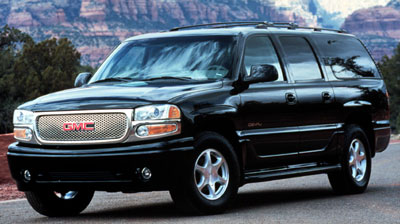 Folks who truly need a size extra-large sport-utility will find the Yukon XL hard to beat. All-new and tremendously improved for the 2000 model year, the Yukon XL has been refined even further for 2001.

Because it’s available in two different load ratings, the Yukon XL 1500 and 2500 models can offer a more people-friendly alternative to Ford’s brutishly heavy-duty Excursion. And now you can even buy the Yukon XL with the same luxurious Denali equipment reserved previously for the shorter-wheelbase Yukon.

Experienced SUV shoppers will recognize the Yukon XL as the direct descendant of the old GMC Suburban. For several decades, Chevrolet and GMC shared the Suburban label for their essentially similar, full-size, pickup truck-based station wagons. But after last year’s complete overhaul, Chevrolet retained custody of the Suburban badge, and the corresponding GMC became the Yukon XL.

The name change made a lot of sense, because GMC has sold a shorter version of the Suburban called the Yukon since 1997. (Chevy has one of these, too, and calls it the Tahoe.) Now all of GMC’s full-size SUVs are Yukons. In keeping with GMC’s rank as the premium truck division for General Motors, Yukons are priced higher than Tahoes and Suburbans, but come with more standard equipment.

The XL in GMC Yukon XL means extra long; the Yukon XL is based on the same platform as the Yukon, but it’s stretched 14 inches in wheelbase and about 20 inches overall. While the Yukon can carry a lot of people or a lot of cargo, the Yukon XL can do both at the same time. The Yukon XL also offers a bigger towing capacity. (Look for a separate nctd.com review of the standard-wheelbase GMC Yukon.)

GMC offers the Yukon XL with rear or four-wheel drive, and in two load ratings. The popular 1500 model is rated to tow trailers up to 8800 pounds with 2WD, or 8600 pounds with 4WD. The heavier-duty 2500 is rated to pull trailers up to 12,000 pounds in 2WD or 4WD. Each of these variations is available in two trim levels, the already well-equipped SLE and even better equipped SLT.

New for 2001 is the luxurious Yukon XL Denali. (GMC has offered a Denali version of the shorter Yukon since 1998.) Based on the 4WD Yukon XL 1500, the Yukon XL Denali packs a bigger engine and more sophisticated full-time all-wheel-drive, and makes standard nearly every option offered on the regular Yukon XL models. Distinctive grille, wheels, body cladding, and interior trim distinguish the Denali from the rest of the Yukon XL line.

Regardless of engine, all XL models come with an electronically controlled four-speed automatic transmission.

SLE/SLT Yukon XLs with 4WD use a fairly conventional part-time system GM calls Autotrac; it uses a two-speed transfer case that locks front and rear axle speeds together in four-wheel-drive mode. This is the traditional kind of four-wheel drive that is considered best for serious off-road driving. Pressing a button switches the system to an Auto 4WD mode that automatically shifts torque between the front and rear wheels as conditions demand.

Denali comes with a more sophisticated full-time all-wheel-drive system from supplier New Venture Gear that uses a planetary center differential set for a 38/62 front/rear torque split; a silicone viscous coupling unit progressively locks up if one axle or the other starts to slip. This is all contained in a cast-magnesium housing that saves 15 pounds compared to Autotrac. Aluminum front and rear prop shafts save even more weight and minimize vibration. A locking rear differential, optional on other Yukon XLs, is standard on Denali.

GM completely redesigned the Yukon XL and Suburban for 2000. From chassis to interior, the Yukon XL is a more refined and comfortable vehicle than the 1999 Suburban. The frame is stronger, yet lighter, providing a tremendously good platform. Generous cross bracing adds stiffness, helping to retain the rigid chassis as well as allowing engineers to design a suspension that soaks up the jarring bumps and craters found on and off road.

For 2001, SLE and SLT Yukon XLs retain the slightly rounded-off styling introduced for 2000. Compared to earlier Suburbans, the Yukon XL is strikingly different, yet familiar at the same time. The design hasn’t changed so much that you wonder whether it’s equal to the capabilities of the previous model. Be assured it is just as capable, yet more contemporary.

The Denali trades the standard Yukon XL’s black grille for a bright mask of fine-metal mesh. But the Denali goes with body-color rather than bright bumpers to keep the overall flash level about equal. Round fog lights are neatly tunneled into the lower part of the front bumper. (All Yukon XLs have fog lights, but they are less conspicuous on standard models.) Oddly shaped lower body cladding incorporates front and rear stone guards and does blend nicely into Denali’s standard color-keyed running boards.

Less visible are the mechanical improvements that GMC has made to all Yukons for 2001. The 5.3-liter V8 has tighter bearing tolerances for quieter operation, and its mass air-flow meter now uses an integral temperature sensor for more accurate fuel metering. Other changes, including platinum-tipped spark plugs, are designed to reduce maintenance requirements.

The 6.0-liter V8, meanwhile, now breathes through lightweight aluminum cylinder heads with more aggressive porting. Valve lift and duration have been re-tuned to match the new ports, boosting horsepower from 300 last year to this year’s 320. (According to GMC, that’s 10 horsepower more than the 310 developed by Ford’s 6.8-liter V10.)

Interior designs for GMC trucks have become very untruck-like. The Yukon XL dash retains a utilitarian aspect, with instruments and controls familiar to owners of other GM vehicles, yet the entire appearance is more contemporary.

Our test vehicle was a Yukon XL Denali, whose tone-on-tone leather bucket seats suggest a luxury sedan more than anything even distantly related to a truck. Seat belts mount to the seat frame, and the side-impact airbags are incorporated into the seats. Ten-way power adjustments include side bolsters, lumbar support, and articulated headrests.

Our Denali had the 50/50 split bench seat in the second row, although a pair of heated bucket seats is available for the second row for $290.

The third-row bench also splits 50/50 so that each side can be folded independently. The first two rows are convenient and relatively easy to slide into or out of. However, the third row is a bit more challenging. While members of our test group were all able to use the seat, a few of our larger cohorts felt it wasn’t the place for them. Still, they’re a vast improvement over any of the third rows in smaller SUVs.

Last year, buyers could not order both a power sliding sunroof and automatic air conditioning, because the location of the controls conflicted. GMC has fixed the conflict this year, and added separate controls for the rear-seat heater. Front and rear heating and air conditioning is standard on all Yukon models; automatic climate control is optional on SLE/SLT and standard on Denali.

GM’s OnStar security and information service is standard on Denali, optional on SLT.

Buyers of basic SLE or SLT Yukons can select either side-by-side cargo doors or an all-aluminum liftgate with a glass section that lifts independently. the liftgate is convenient for quickly adding and removing lightweight items to the cargo compartment. We preferred the cargo doors because they open wide and allow a closer working position to the vehicle’s storage area. Cargo doors are also useful when pulling trailers because they will usually clear the trailer tongue jack. The hinges can be released, allowing the doors to open fully when loading large items. However, the luxury-oriented Denali offers only the lightweight liftgate. The liftgate has the advantage of offering better rearward visibility than the cargo doors, which block the view in the center where the doors meet.

The new Yukon XL displayed its ruggedness while driving through the Sierras near Lake Tahoe, California. Here, we were able to drive through conditions produced by the natural occurrence of weather and terrain that only the Sierras can provide. The rugged buttes stretching skyward provided everything from warm sun to freezing snow and ice. Our drive took us from just a few feet above sea level to lofty treeless altitudes. While a loss of power at these heights is noticeable in any vehicle, our Yukon XL equipped with the 5.3-liter V8 continued on with barely a hiccup. It persevered through muck and mire as we climbed ever deeper into the mountains and weather conditions grew worse.

New for 2000 is the AutoRide suspension system, a fully automatic suspension, which varies the amount of damping the vehicle may need. Whether towing a horse trailer or picking up the soccer team, AutoRide continually adjusts the suspension for optimum ride and handling. This technology also helps reduce dive on braking (so that the nose of the vehicle doesn’t dip down unduly) and body roll (or lean) during cornering. AutoRide is a $700 option on 1500s, $750 on 2500s, and standard on Denali.

The suspension system soaked up the large potholes and rough terrain we encountered. Not surprisingly, the 1500 model, which comes with torsion bars up front and coil springs in the rear, smoothed out road vibration much better than the 2500 model, which is fitted with rear leaf springs. That comes with the territory of the larger load-hauling capability of the 2500 series. By far, most buyers opt for the 1500-series Yukon XL models, which offer good towing capability. But the 2500 is the better choice for pulling extremely heavy trailers.

The independent front suspension flattens the most rugged terrain so that the Yukon XL’s passengers feel coddled, while the solid rear axle allows impressive towing capability. The suspension also contributes to the 2001 Yukon XL’s tighter turning radius when compared with pre-2000 models, and that’s useful for crowded parking lots, U-turns, and off-road driving.

Good brakes are important for a vehicle that weighs more than two tons and is sometimes asked to pull heavy trailers. With the Yukon’s redesign came exceptionally good brakes, with 40 percent larger ventilated discs at the front wheels, and big 13.2-inch discs on the rear axle. While we equate fast emergency braking maneuvers with testing a vehicle’s ability to stop, sometimes being able to stop straight and true at slow speeds is important, and the Yukon XL delivers on that front. The previous-generation Suburban had a mushy brake pedal, but that has been replaced with a much firmer pedal in this new Yukon XL for improved driver control.

By contrast, the Denali’s full-time all-wheel-drive system requires no input from the driver.

Responsiveness from each of the three available V8 engines is excellent. Yet we continually returned to the big 6.0-liter with its 320 horsepower and 360 pound-feet of torque. A carry-over from the truck line is the tow/haul transmission mode. By pushing a switch on the end of the gearshift lever, the driver can change the shifting points of the automatic transmission. The tow/haul mode improves performance while towing through mountainous terrain and lessens wear on the transmission.

In its most basic guise, or dressed up as the luxurious Denali, the Yukon XL retains all the ruggedness and versatility that the old GMC Suburban taught us to expect.

If you have the need to move several people, loads of stuff, and/or a heavy trailer, all at the same time, then GMC’s Yukon XL is a great choice.