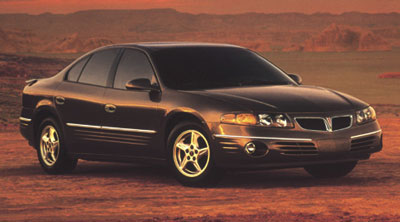 With its distinctive appearance, there's no mistaking the Pontiac Bonneville for anything else. Pontiac's flagship sedan comes with an aggressive stance, a sporty driving character, and can seat up to six people. In the past, manufacturers from Germany and Sweden held the crown as the top-producers of sports sedans, but this Bonneville can give the Europeans a run for the money.

The Bonneville was redesigned last year, and changes very little for 2001. The OnStar navigation and security system is now standard on SLE and SSEi models, and heated front seats are optional on all models.

All Bonnevilles come with 3.8-liter V6 engines. The SSEi gets a supercharger that boosts engine power to 240 horsepower. The SE and SLE have a normally aspirated (non-boosted) version of the same engine, which produces 205 horsepower. Performance of all three models is good, although most driving enthusiasts will appreciate the extra oomph of the supercharged SSEi.

Many of the standard features on the more expensive models can be ordered as options on the lower-priced models.

The Bonneville has a look that some might think borders on gauche. It has an assertive pointed nose with the signature Pontiac grille dipping down into the front bumper.

SE and SLE models come with two fog lamps mounted in the outer edge of the bumper, while the SSEi gets two fog lamps mounted nearer the center that gives the car an even more aggressive appearance. Extra body cladding on the lower sides of the SSEi provides a racy Coke-bottle shape and carries the theme back to the high and curvy trunk line. The base SE model gets steel wheels with metal covers while the other models get alloy wheels with an aggressive spoke pattern that complements the body quite nicely.

This is a comfortable, roomy interior. With the optional front bench seat, there is room for six people although passengers will find the center seat in the front and rear a little cramped. Rear-seat head- and legroom is good for two passengers. The standard seating configuration includes spacious bucket seats in front that hold driver and passenger in quite snuggly, especially with cloth material, which is a lot less slippery than the optional leather. The six-way power front driver seat option offers a multiple adjustments.

The cockpit has a sporty character with a center console that wraps around the driver much like one expects in a sports car. The edge of the center panel curves up over the top of the instrument panel in one large sweep. No less than eight fluidic vents in the dashboard can be aimed in any direction. Within the instrument pod there is a group of six small but easy to read gauges clustered in front of the steering wheel. An oil pressure gauge and voltmeter join the speedometer, tachometer, fuel and water temperature gauges. The second set of audio controls on the steering wheel are convenient yet are still found on few other cars, despite their obvious safety value.

In addition, the SSEi is fitted with a driver information message center that can display a variety of vehicle malfunction warnings. Individual setting for the driver's seat, mirror, and climate control and radio preferences can be programmed as well. All models come with “catcher's mitt” front seats with integrated seatbelts and headrests that grab one's body in the event of an accident for increased safety. Rear-seat passengers are not forgotten as they get a decent sized center armrest with cupholders and storage box. Pass-through access to the trunk for skis and other long items is available when the console is folded down.

Fortunately, the Bonneville's driving characteristics match up to its looks. Even in the standard SE configuration, the Bonneville has enough power to provide respectable performance. Thanks to the engine's relatively large capacity it has more torque than most of its rivals, which is what counts when it comes to quickly leaving a stop light, and enough power to accelerate on to the highway. The transmission shifts smoothly and the car responds promptly to the driver's input.

The Bonneville has a stiff body shell that acquits itself well in handling twisty roads. This is a solid-feeling car, and doesn't wallow like so many full-size American models of years gone by. Pontiac's advertising brags about its cars having a wide track (which lends itself to secure handling). But while the Bonneville is indeed wide, the Dodge Intrepid has nearly the same dimensions.

Even though the car has front-wheel-drive it does not suffer from too much torque steer ? thanks to a careful suspension design. (Torque steer is a phenomenon found on front-wheel-drive cars that pulls the steering wheel in one direction under hard acceleration.) Traction control (optional on the SE) helps keep the front tires from spinning under heavy acceleration. All models have a standard load-leveling rear suspension system, which helps make the car handle consistently regardless of the cargo load.

Naturally, the SSEi model ? with its slightly stiffer suspension ? handles better than the SE but still gives a smooth ride without being too harsh. The base SE has a little softer ride, but offers better control than other cars of similar size, such as the Toyota Avalon and Dodge Intrepid.

A clever tire-inflation monitor that constantly informs the driver of each tire's inflation status is a useful standard feature. An optional StabiliTrak system helps provide additional stability by selectively applying the brakes to the front wheels in emergency situations to counteract skids. The SSEi is also available with a head-up display, which projects information such as vehicle speed onto the inside of the windshield on the driver's side.

Anyone who needs a full-size car with a sporty character should enjoy the Pontiac Bonneville. It has a unique look that fits Pontiac's performance image. The Bonneville, especially the SSEi, is actually competitive with several near-luxury import models such as a Lexus ES 300 or even a BMW 3 Series. Indeed it would be appropriate to slot it in between those two popular cars; the Bonneville is sportier than the Lexus, but not on par with a BMW. Nevertheless, if a roomy interior is important, it beats both those cars hands down. In its base SE form the Bonneville is closest in comparison to the Dodge Intrepid and Chrysler Concorde.