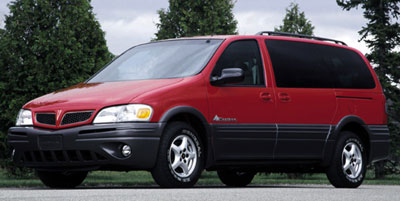 Pontiac advertising seems to suggest that Montana is something more exciting and adventurous than the standard-issue suburban minivan. The truth is, the Montana differs only in detail from minivans offered by Chevrolet and Oldsmobile. And yet, the Montana does indeed offer some engaging characteristics, which set it apart from even its closest, GM-built cousins.

For one thing, you grab Montana by a steering wheel that’s thick and meaty, and roll on tires that don’t squeal unless drive with a sports-sedan level or enthusiasm. Those things alone relate to a better driving experience.

For another, Montana is really quite handsome by minivan standards, especially with the new and neater front bumper and grille it has acquired for 2001. And that contributes to the ownership experience.

Finally, like its GM nest mates, Montana can be ordered with a slickly integrated video entertainment system that can significantly improve your family’s traveling experience.

The Montana is available in two wheelbase lengths (112 and 120 inches), and with eight or 10 different option packages, depending on how you count them. All of them are simply called Montana, with no suffixes such as SE, LE, and so forth; which is either admirably refreshing or exasperatingly confusing, depending on your point of view.

In any case, regular-length Montanas start at $24,180; extended-length versions are priced from $26,520. Air conditioning, ABS, and side-impact airbags are standard on all models.

You’ll want to spend some time figuring out the best seating arrangement for your particular needs. The base-level, short-wheelbase van comes with six bucket seats, but can also be configured for seven passsengers, with two buckets up front, two captain’s chairs in the middle, and a three-person 50/50 split bench seat in the rear. Or trade the split bench for a fully stowable bench. Even eight-passenger seating is available, with three modular bucket seats in the second row and the stowable bench in the third. Extended-length models offer the same configurations again, minus the six-bucket style and plus a second eight-passenger variation with the split bench rather than the stowable in the extreme rear.

The MontanaVision video entertainment system comes only as part of the top two option packages on the extended-wheelbase model. So, effectively, MontanVision prices begin at $31,275.

All models get two sliding rear doors as standard equipment; a power-operated curbside door comes with most long-wheelbase trim levels. OnStar is standard on all models. Parking Aid, an ultrasonic system that detects objects immediatley behind the rear bumper, is standard on the more deluxe long-wheelbase models and optional on others.

Like the Chevy Venture and Oldsmobile Silhouette, the Montana is powered by a 185-horsepower, 3.4-liter V6 engine attached to a four-speed automatic transmission that drives the front wheels. This type of layout is common to all the best-selling minivans. The engine sits in the usual sideways position, which allows maximum use of interior space. The suspension is independent up front, with a twist-beam axle in the rear; again like the Olds and Chevy minivans. The twist-beam axle is simpler than an independent setup, but nearly as light, and contributes much-needed rear roll stiffness in a front-heavy vehicle.

The standard bucket seats fold and remove easily. Handy diagrams on the frames underneath the seats instruct you how to unlatch them from the floor. They are among the lightest seats in the minivan market, so removing them won’t kill your back. However, they are heavy enough that you’ll want to convince your teenager to move them across the minivan’s floor and into your garage.

Inside you’ll notice the seat has a height-adjustment lever, which really aids comfort on long trips. You can completely change your driving position without getting too close or too far from the steering wheel. The fore-and-aft range of the driver’s seat is one of the longest we’ve sampled, and will probably make room for plus-six-and-a-half-footers. That also means you can make yourself some room in the driver’s seat if you have to wait there for the soccer game to end.

The front seats themselves hold you securely, but they don’t feel like the buckets in a sedan. There are large side bolsters on the backs of the seats, but the seating surface is relatively flat. This makes the van easy to get into, but encourages you to move around on long trips.

The dashboard is neatly arranged, and the gauges are easy to read. However, when the speedometer needle reaches 75 mph, it blocks the right turn-signal indicator. A gentle chime indicates you’ve left the indicator on, but you’ll miss it if you’ve got the stereo turned up. The steering wheel has seek, set, and AM/FM radio controls within reach of your left thumb; and volume, mute, and play (for cassettes and CDs) near your right thumb.

The videotape and CD players have been moved for 2001, from down near the floor to up on the front console; and the MontanaVision flat-panel color monitor screen has been expanded from 5.6 inches to 6.8. It still folds down from the ceiling where the front-seat occupants can’t see it, a legal requirement. Separate controls allow mid and rear-seat passengers to adjust the volume on individual headphones, and to regulate heating and cooling in their area. All of this equipment will keep rear-seaters busy and entertained. What we like best about this system is its integration. Aftermarket systems we’ve tried tend to be more difficult to use and not as durable.

Whatever Pontiac wants it to be, Montana is the perfect family truckster. Cross winds won’t make it wander on the way to Wally World. Veer off onto poorly maintained secondary roads and the suspension doesn’t get upset. You feel confident driving on bad roads.

The Montana corners quickly for a minivan, especially versions that have the Sport Performance and Handling Package. It’s tires don’t complain until you push very hard, and that’s unique for a minivan. Body roll is less noticeable in the Montana than it is in the Silhouette and Venture; part of the Montana’s handling package includes stiffer springs and larger shock absorbers in the rear.

Back on the big highways, you’ll feel no pain. The noise from the powerplant is limited to an isolated and distant hissing. At 80 mph, which we found to be the average cruising speed on most Western highways marked at a 75 mph limit, the engine is revving at just 2400 rpm. The Montana doesn’t sound like it’s straining to keep up, and passing slower cars can be done without too much prior planning.

The V6 engine has good throttle response in traffic, and it’s efficient; we managed 25 mpg on a fast trip across the state. The EPA estimates highway fuel economy at 26 mpg. Traction control is optional; and it’s a good idea for easier control in winter driving. Without traction control engaged, you can easily spin one of the front wheels during a spirited take-off on dry pavement. With a torque-pumping V6 and front-wheel drive, torque steer is sometimes noticeable as a slight tug on the steering wheel under hard acceleration.

The brake pedal is typically spongy, as it is on most GM platforms that were designed in the early 1990s. Newer designs, such as the latest Bonneville and GM’s newest big pickups and SUVs, lack this mushy feeling, so the Montana will likely get a better-feeling brake pedal in the future. Having said that, the antilock brake system works well, without undue clattering of the pedal.

The Pontiac Montana is one of our favorite minivans because of its styling, handling and braking. The Montana was also the favorite of women responding to Good Housekeeping’s latest driving survey.

The Montana is the most appealing of the three GM minivans to us, and that’s just because we prefer the Ducks Unlimited-style colors, the stickier tires and the ’99 Bonneville sports sedan steering wheel. It handles rough roads without any ungainly bouncing around. And it still has all the bins and cubbies of the Oldsmobile and Chevy versions.

Montana feels smaller than the big new Honda Odyssey, faster than the new Mazda MPV, but it’s not as quick as the latest Mercury Villager or Dodge Caravan. Stocked as it is with a lot of lookalike vehicles, we think there’s plenty of room in the minivan market for Montana.