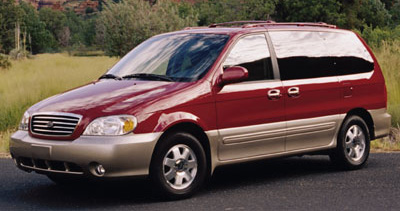 Kia’s all-new Sedona offers an exceptionally good value for a big family who doesn’t want to break the budget on a minivan. The 2002 Kia Sedona is bigger than a Dodge Caravan and comes loaded with popular features, but costs thousands less than popular minivans.

Both models are powered by a big 3.5-liter V6 engine mated to a five-speed automatic transmission. They provide seven-passenger seating and come standard with sliding doors on both sides.

The Kia Sedona is the same length as a Toyota Sienna, but wider and a little taller, measuring 194 inches long on a 114.6-inch wheelbase. That means the Sedona fits in between the long vans, such as the Dodge Grand Caravan, Honda Odyssey and long-wheelbase versions of the Chevy Venture, and the shorter vans such as the Caravan, the standard-length Venture and the Mazda MPV.

Kia product planners in America worked with Kia’s engineers and designers in Korea to come up with a traditional minivan design. A minivan needs to look like a minivan, they said, it can’t look strange. Sedona styling cues include a bold grille, big headlamps, and a body-colored roof rack (on the EX). Two-tone body side cladding is an option for EX models. Overall, the Kia Sedona is an attractive design.

Outside door handles are easy to grab. However, the inside edges of them do not impart a sense of quality and the finish on the handles is not up to par.

The rear hatch is easy to open. Pull on the lever and it raises itself up and out of the way; anyone less than six feet tall can stand under the hatch without worrying about banging their head on it. Closing it takes a little effort, however, so you’ll probably need both hands. Like other minivans this size, there isn’t a whole lot of room for cargo behind the third row. There is enough space for a dozen bags of groceries, however, and hooks are provided on the backs of the third-row seats to help keep plastic grocery bags in place.

Living with the Sedona is convenient and comfortable. Visibility from the driver’s seat is excellent. The view through the rearview mirror is hindered by headrests somewhat, though there’s a clear view out the middle. Big power side mirrors offer a good view rearward.

All seating positions are roomy and comfortable. The cloth LX seats are supportive, better than the flat seats in the Ford Windstar, and the steering wheel is comfortable. The Sedona’s cloth fabric feels like mouse fur, and may be a bit warm in the summer. Better are the leather-covered seats optional on the EX, which are firm and offer power lumbar adjustment. Sedona’s seats seem smaller than those in a big SUV, which suited me, though I would have preferred more side bolstering. Adjustable-height shoulder belts come standard and enhance comfort. The front inside door handles are easy to find and operate, which isn’t true of many SUVs.

The second row of seats is comfortable, particularly when ordered as captain’s chairs. Second- and third-row occupants each have their own reading lights and cup holders.

Even the third row is a comfortable place for two adults, much more comfortable than the third row that’s found in big sport-utility vehicles. There’s lots of leg room and good hip room; headroom is a little more limited, but fine for an average size adult. Window switches allow third-row occupants to open and close the rear quarter windows.

Getting into and out of the third row is really easy, something that can’t be said of any SUV, including the giant Suburban. To get out, simply press a foot lever and the seatback flips forward and the seat automatically slides forward. Manually operated side doors easily slide open and closed.

To make room for cargo, the third row flips forward, then tumbles, but you must remove the headrests. The rear seats are heavy, like those in other minivans, such as the Dodge Caravan. They have grab handles, but the seatback doesn’t stay locked down, making them awkward to handle. The second-row seats are easy to pop in and pop out and are mounted on rollers, but, like most seats, they are heavy and awkward to handle.

Sedona’s transmission lever comes out of the dash similar to the way the shifter is mounted in the Lexus RX300. Odd at first glance, this design takes up less space and offers the advantage of opening up interior space between the front seats. It’s a good spot for tote bags, purses, or a couple of sacks of groceries, much nicer than having things roll around in the passenger-side footwell as they do in most vehicles. When equipped with second-row captain’s chairs, this design creates an area down the center of the seats that’s useful for carrying longer items.

Interior switchgear is functional, but not elegant to the touch. It does not impart a feeling of quality. Buttons for cruise control, rear defrost, and the audio system are mounted high for accessibility. But the buttons are small and fussy and lack sufficient tactile feedback. Nice details include visor extensions for early morning or late afternoon driving. Two glove boxes provide storage in the Sedona, along with a compartment on top of dash similar to that found in Subarus. There are more cup holders than seating positions. Interiors are available in beige or gray.

Driving the Sedona is enjoyable. The V6 engine offers responsive acceleration around town. Kia tuned the 3.5-liter V6 more for torque than horsepower, and peak torque comes at just 3500 rpm. That means more of the power is focused at lower rpm, giving the Sedona quick acceleration off the line. This engine feels at least as smooth as the V6 engines found in American minivans.

A five-speed automatic transmission, once a feature found only on expensive luxury cars, helps give the Sedona responsive performance in all situations. The transmission smooth and responsive. With five gears to choose from, the transmission is able to keep the engine running at the best speed for the conditions. Fifth gear is an overdrive (0.73:1) for improved fuel economy on the highway. Sedona burns regular gas, unlike the Honda Odyssey.

The Sedona offers a nice ride quality. It’s smooth over road undulations. It handles well, the steering is tight, and it feels stable at higher speeds. The headlamp/foglamp combination throws a decent beam.

Anti-lock brakes are optional and help bring the Sedona to an undramatic stop when pushed to the limit. We recommend ABS because it helps the driver maintain steering control in an emergency braking maneuver: push down on the brake pedal hard and remember to steer around obstacles to try to avoid them. Kia says it put a lot of emphasis on crashworthiness when designing the Sedona, with the objective of earning a five-star government crash rating.

Kia is getting more mighty every day, gaining the acceptance of American consumers. The company now sells more vehicles in the U.S. than Jaguar, Saab, or Land Rover do. The Sedona is Kia’s first minivan, and the company says minivan buyers are far more demanding than compact-car buyers.

The new Sedona offers an outstanding value when compared with other minivans. Quality? Only time will tell. In the meantime, the Kia Sedona offers much lower monthly payments, a responsive V6, an impressive list of features, and one of the best warranties in the business.