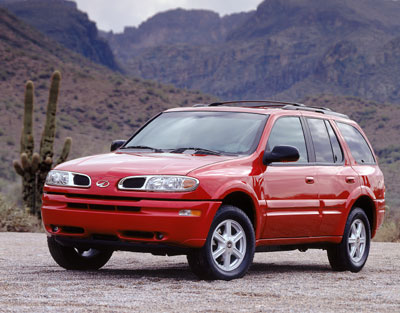 The Oldsmobile Bravada is the most luxurious of three new midsize SUVs from General Motors. As the Oldsmobile marketers like to say, if there’s an Aurora in your garage, a Bravada would make a perfect stablemate. Two dinosaurs. Each may be technically innovative, handsome, and a truly fine vehicle (the Bravada is more than that), but that doesn’t guarantee survival. Two days after the press introduction of the Bravada, GM announced that it would be putting Oldsmobile down, after a 103-year run. To assuage any concerns about service, Oldsmobile is, for a limited time, offering a 5-year/60,000-mile warranty on its new vehicles.

Redesigned from the ground up, the Bravada is an engineering knockout. By its progressive design, this vehicle has already made GM history. Dinosaur indeed. The Bravada makes the Jeep Grand Cherokee look like the dinosaur.

Only one trim level of the Bravada is available, although it comes either with Oldsmobile’s SmartTrak all-wheel-drive system or with (standard) two-wheel drive.

Options include a six-disc in-dash CD changer or premium Bose sound system, heated memory seats, mirror-mounted turn signals, a cargo cover and net, rain-sensing wipers, sunroof, and a small tape recorder called Travel Note, which allows you to record phone numbers if you’re taking them over your own cellphone. Also available is a rear-seat DVD entertainment system, with a seven-inch flip-down screen and wireless headphones.

The styling is clearly Oldsmobile, with thin horizontal headlamps and dual air intake apertures in the nose, separated by the swoopy logo in chrome. Wide sleek headlights are attached to the apertures, two halogen beams integrated with an amber turn signal that wraps around the fender. Below this grille are two long horizontal slots incorporated into the bumper, and at the very bottom are two more slots with small round foglamps.

Side cladding is body-colored, side glass is tinted, and the wheels are six-spoke cast aluminum with polished aluminum optional. Corner marker lights, which shine at right angles with the turn signals, are prominent. The rear end and tailgate are quite clean, with the entire width of the rear bumper being a step, which is convenient because the cargo floor is a bit high.

Attention to detail is evident throughout the vehicle, from a box that helps air-cool the battery, to remarkably sanitary wiring under the hood, to a seven-pin receptacle for towing trailers with brakes, to rear-seat headrests that conveniently flip down for better rearward driver visibility.

Overall, the 2002 Bravada is eight inches longer and more than five inches wider than the previous model. The track is 63.1 inches front and 62.1 inches rear, exceeded in its class only by the super-wide Acura MDX. (The track is the distance between the left and right tires.) A wide track means a lower center of gravity and thus better stability. With any SUV’s tendency to roll more than a sedan, this is an important feature. In addition, the Michelin all-season touring tires were specially developed for the AWD Bravada, measuring P255/60R17. These are a slightly lower profile than available on the GMC Envoy SLT with optional air-bladder suspension, which is mechanically very similar to the Bravada.

All five Bravada passengers get three-point seatbelts. (Many SUVs, including the 2002 Mercury Mountaineer, use a lap belt for the rear center seat.) It’s a roomy vehicle with 44.6 inches of front legroom. Rear-seat passengers get 37.1 inches of legroom and a roomy 58.1 inches of hip room.

The instrumentation layout is very organized and high-rent feeling. A big tachometer is on the left, speedometer in center, and on the right are smaller gauges for water, battery, gas, and oil. The wood is ample. Four big round registers for heating and air conditioning look stylish and purposeful with polished nickel trim. The four-spoke leather-wrapped steering wheel includes controls for climate, sound, cruise control, and driver information center (in eight languages).

The console includes an open storage bin, an enclosed compartment and two cupholders forward of the gear lever, with two more for the rear passengers. The emergency brake lever is also located there. There are pockets in the front doors and behind the front seats, though none in the rear doors. Standard behind the rear seat is a small hidden compartment under the floor and a power outlet, with a cargo net and scrolling tonneau cover optional.

The overhead console includes a sunglasses holder, with optional Travelnote digital recorder that allows the driver to orally take phone numbers while on a cellphone. The heating and air conditioning can be controlled separately by the driver and front and rear passengers.

The standard sound system is a radio/CD, but optional are a radio/CD/cassette, radio with six-disc in-dash CD, or six-speaker 275-watt Bose system. Our test model was equipped with the Bose, offering outstanding sound quality and adjustment versatility. All the systems include RDS (Radio Data Systems) technology, allowing the listener to search for stations by type, display song and artist information, and provide traffic and weather updates.

The OnStar communications system is standard. It includes GPS navigation, hands-free cellphone communication including free first year safety and security service-automatic crash and theft reporting, as well as remote unlocking if you lock yourself out. Mind-boggling possibilities include everything from having your email read to you by a computerized voice (“Virtual Advisor”) to getting directions to the nearest ATM.

General Motors introduced its 2002 midsize SUVs (Oldsmobile Bravada, GMC Envoy, and Chevrolet TrailBlazer) to the international automotive press in Los Cabos on the tip of the Mexican Baja peninsula. We were able to clock about 100 miles of driving on rough and fast Mexican two-lanes-flat and climbing, straight and twisting-and a few laps around an off-road course with steep climbs and descents and 50-mph washboards.

Mostly, we were dazzled by the Vortec 4200 engine. The new Vortec 4200 engine is highly sophisticated: an all-aluminum, double-overhead-cam, 24-valve inline six-not a V8. If a straight-six engine is good enough for BMW and Lexus sedans, why not an Oldsmobile truck? From 4.2 liters, it produces a stunning 270 horsepower, 35 more than the Jeep and 30 more than an Infiniti QX4, Acura MDX or Nissan Pathfinder. It incorporates state-of-the-art engine construction and electronic management, and yields an estimated fuel mileage of about 15/21 mpg city/highway.

It features variable valve timing, electronic throttle control, coil-on-plug ignition and a seven-quart oil pan with a clever tunnel for the front drive axle, which allows the longish block to be mounted six inches lower, contributing to better balance and a lower center of gravity. It’s so quiet and smooth at idle that a feature called “intellistart” had to be added to prevent drivers (initially GM test drivers and engineers) from grinding the starter by turning the key when the engine is already running. And the faster it goes, the smoother it gets. With an official Mexican Highway Patrol escort along on the test drive, we felt free to squirt up to 100 mph, and found much to our pleasure how silky the inline engine is at 80 and above.

The engine also has a very broad torque curve; 90 percent of its peak 275 pounds-feet is available at 1600 rpm, and it’s still there at 5600 rpm. This enabled us to leap past Mexican trucks on steep uphill two-lanes with confidence, while allowing the transmission to do dramatically less downshifting. And when the full-throttle upshift comes at about 6000 rpm the engine is only striding, not screaming. The smooth-shifting four-speed automatic transmission is the proven Hydra-matic 4L60-E, used in GM applications from Corvettes to Cadillac Escalades. Our test model was equipped with the standard 3.73:1 rear end differential, with a 4.10 for more oomph in towing.

The load leveling suspension uses electronically controlled air bladders fitted to the rear coil springs. It’s intended to improve the ride while dealing with off-road nearly as well as the rugged coils. Road inputs are monitored by sensors that tell the system to inflate and deflate the bladders independently, leveling the load horizontally as well as vertically. Because the system uses a small (silent) air compressor, there’s a standard 22-foot-long hose which when attached to a valve in the cargo area can inflate anything from tires to toys.

We drove the Bravada back-to-back with the TrailBlazer, having the same chassis and suspension but without the air springs, and could clearly see the difference–especially over speed bumps (and those topes are ubiquitous in Mexico). Surprisingly, we found that the air suspension didn’t significantly hamper high-speed cornering. And GM engineers at the introduction revealed that there is even an internal debate among them, about how much if any this tilt toward luxury handicaps the Bravada in the hard twisties.

The chassis and suspension are also highly developed, with components that might be found on a high-performance sedan: hydraulically assisted rack-and-pinion steering, four-wheel vented anti-lock disc brakes with twin-piston calipers in front, independent front suspension, five-link rear suspension with Bilstein shock absorbers, and that sophisticated air-bladder mechanism on the rear coil springs for a smoother ride.

The chassis rails are shaped by hydroforming, a process that makes them stronger and light

It’s ironic that GM execs have said that the Bravada was intended “to make a strong statement about the division.” The division is, or will soon be, dead. So maybe the statement is about nostalgia. But Oldsmobile can go out with its head held high, over the quality and state-of-the-art engineering of its final vehicle.