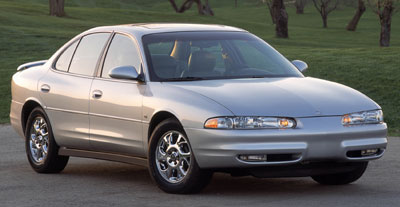 The Oldsmobile Intrigue combines a responsive V6 engine with sophisticated styling and an elegant interior. This midsize sedan is stable at high speeds, agile on winding roads, with good grip. Its rigid structure delivers a smooth ride and good handling.

The Intrigue’s twin-cam V6 delivers lots of power for quick passing on two-lane roads. The Intrigue seats four people comfortably, or its rear seats can be folded down to make room for a lot of luggage. For 2002, new upper and lower anchor tethers have been added for child safety seats. The Intrigue’s interior is handsome, and GL and GLS models feature well-designed climate controls. . GLS comes standard with tasteful leather, this year with a new two-tone treatment.

Overall, the driving experience is more European in flavor than other midsize domestic sedans. It is arguably the best of the General Motors sedans in this class. The Intrigue is an enjoyable car, easy to live with, and it holds its own against such popular mid-size imports as the V6-powered versions of the Toyota Camry and Honda Accord. It offers more character and is lighter on its feet than a Ford Taurus.

All Intrigues are equipped with a 3.5-liter double overhead-cam V6 mated to a four-speed electronically controlled automatic transmission.

Intrigues come well equipped. All 2002 Intrigues come standard with CD players. A new family of radios includes speed-compensated volume control (it turns the radio down when you slow down) and Radio Data System (RDS) technology, which identifies the radio station and format (provided the station subscribes to the service) as well as song titles and artist names.

GX ($23,427) comes standard with air conditioning, and power windows, mirrors and door locks. Tone-on-tone seat fabric provides a luxurious look and the headliner has been upgraded with a new woven material. Also standard is an air filtration system that features a replaceable air filter and should prove a boon to hay-fever sufferers. For 2002, the GX comes standard with an AM/FM/CD stereo with four speakers.

GLS models ($28,502) are equipped with leather seating surfaces, heated front seats with power lumbar support, and GM’s OnStar communications system. For 2002, GLS also comes standard with a sunroof and the Homelink system, which allows owners to program up to three different signals for items such as the garage door opener, house lights, or an electric gate.

Intrigue’s quietly muscular exterior features styling cues from the flagship Oldsmobile Aurora. This is most apparent in the twin openings below the reflector headlamps, which add character to the front end. Aggressive 16-inch wheels fill the wheel wells. The Intrigue’s styling and proportions disguise its substantial size.

For 2002, Tropic Teal and Indigo Blue have been added to the paint palette.

Intrigue shares hardware with GM’s other mid-size entries: Pontiac Grand Prix, Chevy Impala, Buick Century and Buick Regal. Yet the Intrigue presents its own character and is arguably the best interpretation of GM’s W-car group.

The inside color scheme of our Intrigue GL came in a subdued contrast of taupe and cream. Devoid wood trim, it is tastefully done and looked like something from the cover of an interior design catalog. An organic dash design looked clean, uncluttered and contemporary.

GLS models come with leather seating surfaces and a new two-tone scheme. The GLS interior features mini-perforated inserts and is available in Natural with traditional wood-grain accents, or Pewter with Sterling metallic accents.

The Intrigue is a big car by mid-size standards, and there’s corresponding roominess inside. Front legroom, augmented by extended seat travel, is abundant. The front bucket seats are nicely contoured. Six-way power adjustments on the driver’s side are designed well.

There’s plenty of space for two adults in the rear. Long seat cushions provide exceptional thigh support. Five passengers would be crowded for anything but short trips, however. Three people in the back seat is a bit cramped. However, for 2002, upper and lower tethers have been added for child safety seats for all three rear seating positions.

Trunk space is vast with plenty of room for golf bags, or mass quantities of luggage. I folded down one of the rear seats and stowed a set of fly rods there for a 600-mile round trip to Key West.

Lots of glass, a streamlined instrument cowling and a low hood line make for excellent driver sight lines. An analog tachometer and speedometer are separated by an illuminated PRNDL repeater for the transmission. Padded in thick leather, the steering wheel feels good. There are auxiliary switches on the steering column for cruise controls and, on our GL, sound system controls.

The ignition switch is mounted on the dashboard, which eliminates fumbling with column locks; this is the way all ignition switches should be. Similarly, the location of the emergency flasher and main cruise control switches, stacked to the right of the instrument nacelle, is ideal because they are easy to find and easy to reach in a hurry.

Climate controls (standard on GL and GLS) are designed well and feature a passenger temperature adjustment that provides the significant other with some fine-tuning. Intrigue’s cup holders are among the best.

The Intrigue delivers a smooth ride, plenty of power, and quick, accurate steering.

The V6 engine delivers excellent throttle response, enough to blast out of the toll booths on Florida’s Turnpike, an event that sometimes resembles a Grand Prix start. But it’s also smooth, and you can barely feel the four-speed automatic transmission when it shifts through the gears. It’s almost seamless.

The Intrigue offers an excellent balance of ride quality and handling control. There’s plenty of grip, both in corners and when stopping. Quick transitions produce a fair amount of body roll, however. Yet it rides exceptionally well on bumpy streets. It feels smoother and more compliant than the Pontiac Grand Prix on rough surfaces, it’s more agile than the Buick Century, and it has enough punch to keep pace with the Toyota Camry.

Much of the Intrigue’s excellent ride and handling can be traced back to its rigid chassis. A rigid chassis provides greater durability, by reducing vibration. It also helps reduce noise issues. Chassis rigidity is the cornerstone of good vehicle dynamics. Since the suspension components don’t have to compensate for chassis flex, it’s easier to achieve the desired blend of ride and handling traits. Although the Intrigue’s front-drive chassis is an evolutionary development of the Cutlass Supreme/GM-10 platform, it was re-engineered from end to end to improve rigidity; that’s a relatively new and significant engineering priority at GM. The Intrigue seems to indicate that GM is learning how to increase chassis rigidity without increasing size and weight. At 3455 pounds, the Intrigue is no lightweight; it is substantially heavier than its Japanese rivals are. But it doesn’t feel heavy on the road.

The Intrigue feels European in character: firm, but devoid of harshness. Its all-strut suspension is American in design. When driven beyond the grip of the tires it exhibits progressive understeer, a nearly universal trait among front-drive sedans. Understeer describes a vehicle’s resistance to turning into a corner, and it invariably increases as a function of speed. Understeer is favored by American handling engineers because correcting it is intuitive for the driver: Simply slow down. But Oldsmobile added some subtle tweaks that lend an extra measure of precision and pleasure to the Intrigue driving experience. The struts, for example, have four-stage valving with integrated rebound springs and fade-resistant synthetic oil. As a result, the Intrigue’s suspension is able to keep pace with pavement oscillations, which in turn keeps the tires in constant contact with the road.

Steering is precise with little play in the center. GM’s magnetic variable-assist rack-and-pinion system gets the credit.

Brakes are discs all around. ABS is standard equipment, and pedal feel is firmer than with previous examples of GM antilock systems. ABS allows the driver to maintain steering control in a panic braking situation. Traction control is standard on GL and GLS and optional on GX; traction control reduces front wheel spin in slippery conditions.

Also standard is Oldsmobile’s Precision Control System, which helps reduce understeer (the car goes straight when the front wheels are turned) or oversteer (the rear end swings out) after entering a corner too fast. In simple terms, the system helps keep the Intrigue going where the driver steers it. Fully automatic, the system requires no input from the driver and is designed to help drivers maintain control in an emergency maneuver, including heavy braking and turning at the same time to avoid an obstacle. The system senses a skid and applies braking power to individual wheels to correct loss of grip. The Precision Control System is available as part of

Oldsmobile Intrigue delivers quiet comfort with a shot of elegance in a subdued but stylish package. It runs and rides smoothly with handling agility that makes it a pleasure to drive.