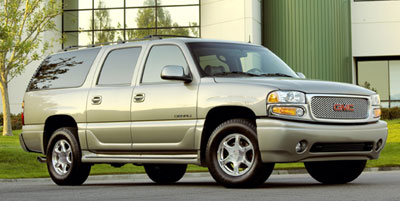 Interiors have been redesigned with new seats, a new instrument panel, a new steering wheel with new controls, and new audio and climate control systems that are both more sophisticated and easier to use. The heating and air conditioning systems themselves have been improved for faster warm-ups and cool-downs. Brakes have been upgraded for improved performance and pedal feel. StabiliTrak and Quadrasteer, two great systems, are available on more models.

Hate the way the doors lock every time you shift out of Park? Annoyed that the horn blows when you lock the doors? Don’t want the daytime running lamps on? Turn those features off, turn them on, or deploy them partially. Everything is programmable. New Bose stereos, XM Satellite Radio, Panasonic DVD video, wireless headphones, independent controls, and auxiliary inputs galore should ensure everyone is happy for crying out loud. OnStar redirects you when you get lost or can help locate a good Italian restaurant.

Yukon XL remains an excellent choice for families who need three rows of seats on a regular basis. It can haul six to nine people and/or a boatload of cargo. Towing? You can pull a 12,000-pound trailer with a Yukon XL 2500, and you can tow that trailer quickly by opting for the Vortec 8100. That’s right, 8.1-liters.

Based on GM’s excellent full-size truck platform, GMC Yukon XL and Chevrolet Suburban have much in common, but there are some key differences that go well beyond styling. As GM’s upscale truck division, the GMC is available with more luxury features, more power, and better handling in adverse conditions than what’s available from Chevrolet. At the top of the GMC model line is the Yukon XL Denali, an upscale version of the Yukon XL that comes with a powerful 6.0-liter V8 and all-wheel drive.

The base Yukon XL 1500 SLE is well-equipped and comes with the new automatic tri-zone climate control system. It also comes standard with power windows, three rows of seats, an eight-speaker stereo with CD player, cast-aluminum wheels and most other features associated with a premium vehicle. Upholstery is cloth. Front seats are a split bench with six-way power adjustments for the driver.

Yukon XL Denali ($50,405) comes loaded with luxury features along with a more sophisticated full-time all-wheel-drive system and a bigger engine. A locking rear differential is standard on the Denali.

GMC Yukon XL is a long-wheelbase version of the Yukon, just as the Chevrolet Suburban is a long wheelbase version of the Tahoe. XL means extra long. Yukon XL is based on the same platform as the Yukon, but it’s stretched 14 inches in wheelbase and about 20 inches overall. While Yukon can carry a lot of people or haul a lot of cargo, Yukon XL can do both at the same time. Yukon XL also offers a bigger towing capacity.

Yukon XL 4WD models use a part-time system GM calls Autotrac. It has a 2WD mode that was revised for 2003 for more fuel-efficient operation. Shift into 4WD and it locks the front and rear axle speeds together. This is the traditional kind of four-wheel drive that is considered best for serious off-road driving. However, pressing a button switches the system to an Auto 4WD mode that automatically shifts torque between the front and rear wheels as conditions demand, good for wet pavement, gravel roads, or inconsistent conditions. Autotrac was revised for 2003 for improved feel in Auto mode when turning corners at low speeds. A locking rear differential is optional, but a good idea for heavy snow or serious off-road driving.

Opting for Quadrasteer does not improve the appearance of the Yukon XL as ungainly fender flares are added to the rear to accommodate the significantly wider track (by five inches).

The GMC Yukon XL and Chevrolet Suburban are leaders when it comes to seating and cargo capacity. Yukon XL comes standard with nice custom cloth upholstery. The optional Ultrasoft leather is makes this big truck look and feel like a luxury vehicle, if not beautiful to behold.

Bucket seats are available and that’s what came on our 2003 Yukon XL 2500 SLT. Cushy, multi-adjustable and swathed in Ultrasoft leather, we had trouble getting comfortable in them. The seat bottoms lacked support and didn’t seem long enough. The bucket seats are separated by a deep center console that holds lots of stuff. The top of the lid features a nice rubber-lined indention handy for sunglasses and other items. It would be even better if the rubber was an insert that could be removed for cleaning. It would be better still if the top of the console wasn’t angled forward: Lay a clipboard there and it’ll slide off.

Interior ergonomics are otherwise excellent. Cup holders are superb, an important feature for people who live and work in these things. A well-designed pair of map lights is mounted above and can be aimed. A covered power outlet is conveniently located for cell phones and radar detectors, in addition to the cigar lighter inside the ashtray compartment. The Driver Information Center is redesigned for 2003, now located immediately in front, below the speedometer. It’s very handy and easy to use, allowing the driver to program automatic locking and other features, as well as providing trip mileage, fuel economy and other data.

New audio and climate controls are more sophisticated, yet easier to operate than last year’s (2002) models. All Yukon XL models come with a high level of standard equipment. Our 2003 Yukon XL SLT came equipped with XM Satellite Radio, great for traveling because the stations don’t change as you drive across the country, allowing you to keep up on news and weather. You still get ads. New audio controls on the steering wheel make it easy to switch among station presets and modes, among other things. Program the AM, FM1, FM2, XM1, and XM2 bands and you can quickly zip to favorite stations without taking your hands off the wheel. Digital three-zone climate controls permit separate adjustments for driver, passenger, and the rear. The rear heating/air conditioning controls are mounted overhead, good for people as well as pets.

Buttons for Homelink, which can open garage doors and gates and turn on house lights, and the OnStar telematics system are nicely integrated. GM’s OnStar security and information service works well as a navigation system because there’s nothing to program. Press the button and a human operator comes on to provide directions and other assistance. OnStar always knows the location of your vehicle. They will notify authorities of your location if your airbag goes off and you do not respond to their calls. Press the emergency button and they’ll send out the troops. They can unlock your doors if you lock the keys inside, and they can direct you to the nearest gas station or help find a good restaurant or motel.

A pair of ceiling vents is provided on each side of the second row that can be aimed effectively. The driver controls the rear passengers’ temperature and fan speeds and can direct the air to upper or lower vents or both. Our SLT came with a great pair of second-row cup holders that flip out of the bac

For moving people and cargo, you can’t beat the GMC Yukon XL and Chevrolet Suburban and the GMC models tend to be more luxurious. Yukon XL 1500 models offer a smooth ride. It’s built on a rigid platform, which plays a key role in the Yukon XL’s ride and handling.

AutoRide is an optional package that automatically varies shock damping according to driving conditions. Whether riding empty, carrying a full load of people, or towing a horse trailer, AutoRide continually adjusts the suspension for optimum ride and handling. This technology also helps reduce dive on braking (so that the nose of the vehicle doesn’t dip down unduly) and body roll (lean) during cornering. AutoRide is standard on Denali, optional on 1500 and 2500.

The suspension system in the 1500 models soaked up the large potholes and rough terrain we encountered. The independent front suspension flattens the most rugged terrain so that the Yukon XL’s passengers feel coddled, while the solid rear axle allows impressive towing capability. The suspension also contributes to the Yukon XL’s impressive turning radius when compared with pre-2000 models, useful for crowded parking lots, U-turns, and off-road driving.

Autoride didn’t seem to help our 2500 with Quadrasteer, however, which rode rough on I-405 in Los Angeles. Quadrasteer requires heavier components to sustain all of the extra equipment on the rear axle. Our 2500 also came with light-truck tires, rather than passenger-car tires. Weight would likely improve the ride, but we don’t think we’d want to put up with the jounciness of the heavy-duty suspension on a daily basis unless we were towing heavy trailers.

Brakes were revised for 2003 and we found they worked very well. The new brakes are easy to modulate, offered good pedal feel, and seemed to do a good job of stopping our 2003 Yukon XL 2500. They are a far cry from pre-2000 GM truck brakes.

StabiliTrak is a valuable option that could save your life someday or reduce the chance of stuffing your big Yukon XL into the ditch. StabiliTrak is an anti-skid system that compares the driver’s intended path with the vehicle’s actual path, and adjusts engine torque and any of the four brakes to help bring the vehicle back under control. Sophisticated sensors monitor the suspension, steering, antilock braking and traction control systems, constantly measuring steering angle, wheel speeds, brake pressure, lateral and longitudinal acceleration and yaw rate (the vehicle rotation rate, such as when cornering).

Responsiveness from each of the three available V8 engines is excellent. Most people will find the standard 5.3-liter V8 a great companion. Our Yukon XL 2500 came with the big 6.0-liter, which felt and sounded powerful when accelerating onto the freeway.

All Yukon XL models come with a tow/haul mode for the transmission. Pressing a switch on the end of the gearshift lever changes the shift points of the automatic transmission. The tow/haul mode improves performance while towing through mountainous terrain and lessens wear on the transmission. It does this by holding it in any given gear longer and by shifting more abruptly to reduce heat buildup.

Towing a really heavy trailer? A 1500 model is plenty for pulling a car trailer

GMC Yukon XL is a highly capable vehicle when it comes to moving lots of people. But this is a big truck based on a full-size pickup platform. If you simply need a vehicle for carrying four kids around, you’d be better served by a minivan. If you have lots of cargo or pull heavy trailers, however, you’ll be well served by the Yukon XL.

Ride quality of 2500-series models with Quadrasteer is rough on rippled highways, but Quadrasteer helps immensely when towing trailers or parking in tight confines.

We found the front seats lacking, but refinements for 2003 make this great vehicle better.