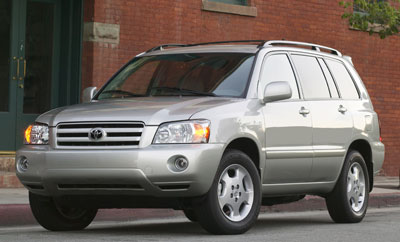 The 2004 Toyota Highlander comes with more powerful engines, new safety features, and optional seating for up to seven passengers. Styling has been revised slightly for 2004, but the real changes are under the skin.

The four-cylinder engine that comes standard is more powerful and the new V6 is larger and more powerful than before. Adding to the improved responsiveness these changes bring is a new five-speed automatic transmission. The suspension has been revised, producing a very soft ride quality. And minor structural changes have been made to improve space efficiency inside.

In spite of these revisions, the Highlander remains the easiest of motoring companions. Getting in and out couldn't be easier. Its flexible interior makes it easy to various combinations of people and cargo. Seating for five comes standard, but 2004 models offer an optional third-row seat to carry up to seven passengers, though they'd be cramped. The third row folds flat and the second-row seat folds nearly so, revealing 80 cubic feet of cargo space, more than a Toyota 4Runner. The Highlander can swallow impromptu flea-markets buys with ease, and tote them home despite sudden worsening of the weather. New airbag systems for 2004 include optional curtain-style airbags and side airbags designed to protect passengers' heads and torsos in a side impact or rollover.

The Highlander offers a soft, smooth ride and its engines are smooth and quiet. The base model, equipped with the revised 2.4-liter four-cylinder engine and front-wheel drive, performs well around town and on the open highway, delivering responsive performance when merging into highway traffic. Equipped with the larger 3.3-liter V6 and all-wheel-drive, the Highlander offers strong power and secure handling in nasty weather. Highlander offers much of what made the Lexus RX 300 popular, but without Lexus-sized monthly payments.

The Toyota Highlander is available in base or Limited trim, each with either front-wheel drive or full-time all-wheel drive. A choice of engines is available: A 2.4-liter inline-4 comes standard, revised for 2004 and rated at 160 horsepower. A new 3.3-liter V6 that produces 230 horsepower is optional on the base Highlander and standard on the Limited. All Highlanders come with automatic transmissions.

The base four-cylinder, front-wheel-drive model ($24,080) comes with air conditioning, power windows and door locks, cruise control, cloth upholstery, sophisticated anti-lock brakes, seating for five, and electronic stability control (VSC). The all-wheel-drive model ($25,480) is similarly equipped. The V6 is optional ($1,060), but if you order it on the 4WD model, then you have to take the optional third-row seat as well ($850).

We recommend the optional side-curtain and seat-mounted side-impact airbags ($680), which are designed to protect the heads and torsos of passengers in the first two rows. Highlander's airbags are more sophisticated for 2004. Sensors in both front seats adjust the frontal airbags to react appropriately to the severity of the collision and the weight of the passengers.

Highlander is actually slightly larger inside, as measured by total EPA interior volume, than the RX 330, although the Lexus has slightly more cargo volume.

Highlander's front bumper, light clusters and grille are new for 2004. The bumper cover has sharper lines molded into it, so its shape is better defined than before. The grille's horizontal bars are bolder and better defined, while the various elements of the light clusters seem to blend together more smoothly. Similar changes have been made around back. At either end, however, the difference is so subtle that only the most dedicated Toyota-watcher is likely to notice.

The Highlander no longer represents the latest in design, however. While the Lexus RX 330, which uses the same basic chassis architecture as the Highlander, is now in its second generation, the Highlander is still in its first generation of design. The Highlander lacks the cutting-edge design of the Nissan Murano, and its front and rear overhangs are relatively large.

Few vehicles are easier to get in and out of than the Toyota Highlander. Neither climbing up nor stepping down is required. Simply slide in. This makes the Highlander one of the most convenient vehicles on the planet for running daily errands. The Highlander will not likely ever annoy you.

Highlander comes with reclining front bucket seats in front. These seats are flat and lean, but supportive and comfortable and adjust to suit various-size drivers. Part of the appeal of SUVs is the ease of seeing out at every angle. And so it is here. The sloping hood of the Highlander makes the forward view even more encompassing.

The second row seats up to three passengers, but is better for two. The center of the second-row seat folds down into an arm rest with cup holders, adding comfort with four aboard and the seats recline for added comfort. It's split 60/40 and folds down with a cleverly articulated seat bottom. It folds fairly flat but not perfectly flat. The second-row seat slides forward to make access to the third row easier, and to provide more legroom for third-row passengers.

Toyota intends for the third row to be used only occasionally. We found sitting in the third row uncomfortable. Our knees rode high, there's no leg room and it's relatively cramped. Legroom is the same, but the Honda Pilot offers substantially more hip and shoulder room in the third row. Also, the side-curtain airbags do not protect third-row passengers as they are designed to do in a Toyota Sienna minivan. Bottom line: Consider a minivan if you need the third row often. A third-row seat folds flat into the floor, with no need to remove the headrests. Third-row seats ($850) include rear privacy glass, a rear heater system with separate fan controls, and additional cup holders.

Back up front, you'll find everything in its place. Power window buttons are right there on the doors. Ventilation ducts are right where you would expect to find them. Radio and heater controls use simple dials and amply sized buttons and operate intuitively. Instruments are readily visible through a panoramic space in the comfortable four-spoke steering wheel. The whole layout bespeaks thoughtful appraisal and wise choices. V6 models come with aluminum interior accents. Interior trim and fabrics in all Highlanders have been upgraded for 2004. 2004 Limited models come with simulated maple-burl dash trim and door scuff plates, but the fake wood on the center stack looks like fake wood. The standard climate control is a single-zone system.

The shifter is uniquely positioned more as a part of the dash than on a central console. This opens up the space between the front seats. It also lends an open, unconfined air to the cockpit. The interior is outfitted with dome, door courtesy, glove box and cargo-area lighting. Map pockets, visor mirrors, and front and rear auxiliary power outlets are provided. The driver's window has one-touch Auto-down.

Highlander provides a large amount of cargo space: 80.6 cubic feet with the second- and third-row seats folded. The second row does not fold perfectly flat, but the third row folds flat and does not take up cargo space. Most people end up riding around with the second-row in place for passengers and the third row folded flat into the floor, leaving nearly 40 cubic feet of space available for stuff. Opening up the third-row seat leaves only 10.5 cubic feet behind it for cargo. The Honda Pilot offers more cargo space, however. A neat feature: The cargo cover stows.

The Toyota Highlander is easy to drive and operate. It feels instantly familiar with no fumbling for controls. The Highlander is quieter than truck-based SUVs both in engine and road noise. It rides smoothly on a variety of surfaces, true to the car side of its SUV heritage, though some road vibration could be felt through steering wheel.

The standard front-wheel-drive, four-cylinder Highlander makes a superb wagon for the city and suburbs, especially now that traction control and stability control are standard equipment. Highlander is far easier to deal with on a daily basis than a truck-based sport-utility. Though you ride a little taller, you look eye to eye at Volvo wagon drivers.

The four-cylinder engine offers good power. It's quick, smooth and quiet. Power is up slightly from the 2003 model to 160 horsepower and 165 pounds-feet of torque. We found the four-cylinder version to be a happy performer and didn't feel like we were missing something by not having the V6. The four-cylinder gets significantly better fuel economy than the V6 (22/27 vs. 18/24 mpg EPA-estimated City/Highway). The four-cylinder Highlander comes with a four-speed automatic transmission. It features a Snow Mode for improved throttle control when starting up on a slippery surface from a standstill.

The optional V6 is larger and more powerful this year, at 3.3 liters and 230 horsepower (vs. 3.0 liters and 220 horsepower in 2003). Torque is increased significantly, to 242 pounds-feet. Torque is that force that propels you away from intersections and up hills. Further enhancing engine smoothness are active-control engine mounts that cancel vibration. Toyota recommends using premium fuel for the V6, but it runs fine on regular. The new V6 is mated to a new five-speed automatic.

Highlander feels at home around town, amidst traffic lights and parking seekers. It's a good size for city streets and soaks up potholes and irregular pavement well. Rolling into suburbia, the Highlander fits right in. It's a natural mall-crawler, maneuverable and quick to nose into a parking slot. It cruises well on major highways, offering good stability and a smooth, quiet ride. It's a solid-feeling structure.

The steering effort is very light at low speeds, so it's easy to turn in tight quarters. Grip is quite good for hard cornering, better than expected. On winding roads, though, the steering felt slow and vague. The suspension is too soft for hard driving. There's too much body movement. The car wallows in corners, the body leans.

Toyota's electronic Vehicle Stability Control (VSC) with traction control (TRAC) is now standard on all Highlanders. VSC can detect sliding of either the front or rear wheels and reduces engine power and/or applies the brakes on individual wheels to correct the Highlander's course.

Braking is certain and smooth. Standard on all 2004 Highlanders are anti-lock brakes (ABS) with Electronic Brake force Distribution (EBD) and Brake Assist. ABS helps maintain steering control while braking hard, while EBD optimizes brake force at each wheel under different load conditions, or as the car's weight shifts forward under braking. Brake Assist detects emergency braking and automatically maintains enough brake pressure to engage the ABS even if the driver makes the mistake of relaxing pressure on the brake pedal.

All-wheel drive works great in slippery or inconsistent conditions. Snow melt, muddy ruts, icy patches on shadowed curves were easily handled by our AWD V6 Limited. On a meandering back road, the Highlander cut up hills through eight inches of newly fallen snow like a snowplow on a rescue mission. All-wheel-drive Highlanders use a permanently engaged system that splits torque 50/50 front/rear, and relies on TRAC's electronics to limit slippage at any wheel. Highlander is intended primarily as a highway and street vehicle with all-weather capability. It is not meant for boulder bashing a

Toyota Highlander is an excellent choice as a no-hassle wagon. Its ease of operation and convenience features make it eminently easy to live with. Highlander carries four people in comfort, hauls a lot of stuff, and will roll through any storm. Toyota's reputation for quality, durability and reliability should mean trouble-free ownership and a strong resale value. Highlander provides what most people want from a modern, on-road sport-utility.