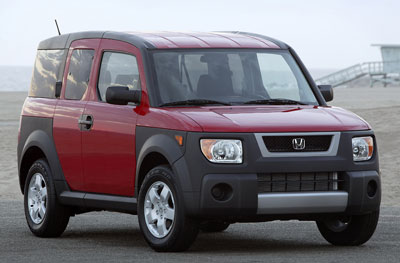 The Honda Element is the versatile box of motor vehicles, combining unique and practical features with a kind of military/utilitarian chic. Honda says the Element was designed specifically for young adventurers who need to haul wet or messy gear, like you can in a pickup, but with the security of an enclosed cargo area, like an SUV's, plus car-like performance and economy. Element provides all that. And it appeals to a much larger audience than just young men.

Element's durable, scratch-resistant interior is a big part of its charm. Its seats are designed to get wet. Inside and out, it looks like a little truck. But it's built with components from the Honda Civic, so it drives more like a car than a truck-based SUV.

The Element was all-new for 2003. Honda has made few changes since then. The 2005 models come with more standard equipment, including side-impact airbags for the top-of-the-line EX models.

The Honda Element is powered by Honda's i-VTEC 2.4-liter four-cylinder engine. It comes with a choice of five-speed manual or four-speed automatic transmission ($800), and it's available with front-wheel drive or Honda's Real Time all-wheel drive ($1,400). Models with all-wheel drive feature a large rear skylight that tilts open or removes completely and stores inside the vehicle.

The 2005 Honda Element comes in two trim levels, LX and EX. The LX ($17,450) comes with air conditioning with micron filtration, power windows, power door locks, power mirrors, cruise control, an adjustable steering column, and a four-speaker AM/FM/CD stereo. (The base DX model has been dropped for 2005.)

Safety features on all Elements include front seatbelts with pre-tensioners and load limiters to reduce the chance of belt-related injuries. The Element earned a five-star rating for both driver and front-seat passenger in the federal (NHTSA) frontal crash test. As mentioned, 2005 EX models include ABS and front-seat side-impact airbags, the latter designed to protect driver and front-passenger's torsos. Curtain airbags, designed for head protection in a side impact or rollover, are not available.

The Honda Element is one funky looking car. Or is it a van? For one thing, the front fascia, front and rear fenders, and rocker panels are all made of a scratch- and dent-resistant composite molded in dark gray (though a few EX models get color-coordinated trim).

From the front, the Element has a cheeky, chunky look accentuated by rectangular headlights and the unusual design of the bumper. The side of the vehicle has a distinct shape unlike any other on American roads. The hood line is fairly low and leads to a steep windshield flowing into a gently curved roofline; while the rear tailgate is nearly vertical.

That tailgate is split horizontally so that the lower half can be used as a seating surface for parties. The Element's rear corners are nicely curved, so it does not look as chunky from behind. Large 16-inch wheels help ensure the Element doesn't look like a minivan.

The Honda Element has lots of room for passengers and cargo, with a flexible interior designed to handle all combinations of people and stuff. The front seat area provides acres of headroom, and there's no center tunnel between the front seats to get in the way.

The rear seats are roomy as well. They're raised off the floor a couple of inches higher than the front seats, giving back-seat passengers better visibility over the front seats. However, we found rear-seat passengers complained about not being able to see signs and buildings; they have to stoop to see out the windshield. This makes the Element a poor choice for taking a group sightseeing.

One of the most talked-about features of the Element is its pillarless, rear-hinged back doors. With no B-pillars to get in the way, there's easy access to the rear seating area. For safety reasons, however, the rear side doors cannot be opened unless the front door has been opened first. Likewise, the rear doors have to be closed before the front side doors can be closed. This design results in a shuffle whenever dropping off back-seat passengers because the front-seat occupants have to unbuckle their seatbelts and open their doors to let rear passengers in or out. Pull up next to a wall and your passengers will find themselves stuck in an unexpected, intimate party, as they all get trapped between the open doors.

When it comes to moving cargo, however, this Honda is in its element. (Sorry, couldn't resist.) It's a great vehicle for getting groceries. The center-opening doors allow easy loading of bulky objects without having a pillar to get in the way. The rear seats fold down easily, and can be swung up to the side, leaving an uninterrupted flat floor space. The front passenger seatback can be folded forward to make room for a 10-foot surfboard, which would still leave room for the driver and one passenger behind the driver: two surfers, two surfboards, in other words. All the seats, including the driver's, can be folded back to make a large, albeit uncomfortable, double bed. When parked, the Element can be set up to serve as a giant locker for outdoor gear, a truly great feature. The keyless remote unlocked only the driver's door on our Element, which was inconvenient, though maybe the dealer can program it to unlock them all.

The floor is covered in a urethane-coated material that resists water, dirt and scratches, and is easily cleaned. The front seats are coated in a waterproof material designed for easy cleaning as well. The rear seats are covered with the same material on LX and EX models.

Storage areas abound. The backs of the front seats have large storage pockets. Both the front and back seats on the driver's side of EX models also have bungee cords on the back to secure larger objects. (For example, says Honda, you could strap skateboards to the backs of both left-side seats.) This helps secure your gear so it isn't rolling around. Cup holders can be found on the backs of folded seats. The Element should be good for tailgate parties.

Up front, the dashboard reflects the simple design of the Element. The gauges are contained in three deep pods, shielding them from the sun. Climate and radio controls are well placed. The EX provides an auxiliary jack for digital media, such as an Apple iPod, so the stored music can be played back directly through the Element's sound system. The 270-watt system included with the EX is pretty decent and includes a large subwoofer beneath the dashboard.

The 2005 Honda Element comes with the same 2.4-liter four-cylinder engine used in the Accord. It's as sweet as any Honda engine, which means it revs freely and has good low-end torque.

Element is a front-wheel-drive vehicle so there is a touch of torque steer, that tugging of the steering wheel under hard acceleration, but it isn't a concern. A bigger issue was wheelspin in the wet. Step on the gas, and it's easy to spin the front wheels on front-wheel-drive models, particularly in the rain. All-wheel drive cures this.

The ride quality is bouncy. From an engineering standpoint, the Honda Element is basically a re-bodied CR-V; and the CR-V is built on the same platform as the Honda Civic. The Element has a slightly wider track than the CR-V, which helps it handle curves better than we expected of such a tall vehicle. Speaking of tall, the ground clearance and ride height are sufficient for primitive roads, but the Element is not an off-road vehicle by any stretch of the imagination. Nor is it supposed to be.

XM Satellite Radio is available and can be a great companion on long trips, delivering CD-quality sound nearly everywhere. Not having to change stations on a cross-country trip has distinct advantages. Around town we enjoy keeping up with the world on FoxNews, CNN and other 24-hour news stations, and sports junkies should appreciate the large selection of sports programming. Finding stations is made easier with RDS (radio data system), which identifies programming on the radio's display. (XM requires a subscription fee, which starts at about $10 per month.)

The Honda Element is a compelling option for drivers who want a genuine utility vehicle that behaves like a car. Its versatile interior makes the Element quite handy in certain situations, with its easy access and flat floor that's easy to clean. Looks are part of the attraction here. You'll either like the Element or hate it. We liked it and found it appeals to people of all ages.