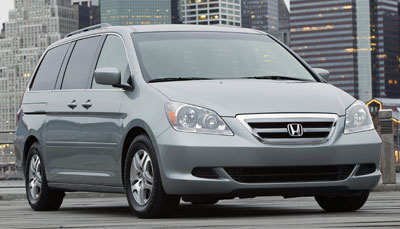 When Honda introduced the second-generation Odyssey minivan in 1999 it was immediately considered the best minivan on the market. Buyers obviously felt the same way as it remained in high demand for a long time.

Honda has launched an all-new Odyssey for 2005. Instead of resting on its laurels, Honda has listened to its customers by adopting many of their suggested changes in its third generation Odyssey. A host of improvements should help put it back at the top of an ever-improving class.

Among them: improved car-like ride and handling, a more powerful and fuel efficient 255-horsepower V6 engine, and a clever seating system that can accommodate up to eight passengers. A new body structure is designed to improve safety, and the Odyssey comes standard with side curtain airbags, electronic stability control, and anti-lock brakes.

The 2005 Honda Odyssey lineup now includes three models. All include the full complement of safety features such as curtain side airbags for all three rows of seats, anti-lock brakes, and vehicle stability assist with traction control.

The LX ($24,995) is the base model with manual sliding side doors, manual driver seat controls and manual air conditioning. It does come standard with power door locks with remote keyless entry, front and side power windows and 60/40 split fold-down rear seats. The air conditioning system includes an air-filtration system.

The Touring ($34,495) is designed more for empty nesters looking for a luxury minivan. Sounding more like the name of a sporty station wagon from Europe, the Touring model has a slightly stiffer suspension, run-flat tires, front and rear parking sensors, automatic tri-zone climate control, power tailgate, power adjustable pedals, upgraded sound system and 17 cupholders, in addition to the items included with the EX with leather model.

At first glance one could be forgiven for thinking there is little difference in styling between the new Odyssey and the previous model. Upon closer examination though it easy to see that it has a more refined look. It looks more masculine, according to those who apply gender attributes to automobiles.

Honda says the Odyssey has a sporty Euro sedan look. That's stretching it a bit in our view, though there is a similarity to the Accord in the front end. If you squint your eyes, and look from the side, the nose even has similar curvy profile to the VW Beetle.

Compared with the old Odyssey, the new one has a bigger grille opening with matching larger headlights. The hood is much more sculptured with curves that lead naturally back to the windshield and help emphasize the bigger fender flares. Unlike other manufacturers, Honda has not hidden the sliding door channels at the base of the window but left them partially obscured by a crease that runs the length of the vehicle.

Talking of length, the new Odyssey has the same overall length and height as the previous model but has gained an extra inch in girth. Somehow Honda has managed to increase the interior length available for cargo and passengers by two inches without increasing the overall exterior length. It has given the extra couple of inches to passengers in the third row of seats.

The Odyssey is the first application of Honda's Advanced Compatibility Engineering (ACE) body structure. (The 2005 Acura RL is the second.) The vehicle's crush zones have been re-engineered to provide even better protection for occupants while lessening damage when hitting other smaller vehicles and pedestrians. A video shown by Honda demonstrates how little damage a Civic received when hit head-on by a new Odyssey. At the same time the main body has been made much more rigid for better handling. Honda also claims the Odyssey has the lowest drag coefficient of any minivan for better fuel economy and high-speed stability.

Who'd ever think of putting a Lazy Susan in a minivan? Honda has. No, it's not for serving food, but for adding an incredibly useful hidden storage area. The previous Odyssey had a storage well under the floor of the front seats for the spare tire. Honda engineers have moved it to a location in the rear. Instead of removing the round space under the floor where the spare used to reside they've turned it into a hidden storage compartment with a rotating compartmentalized bin. There's a small access panel in the floor between the two front seats for front passengers to get access and another bigger one in front of the center row seats for access. So whatever stuff is stowed in the Lazy Susan, front or middle row passengers can turn it for access. Ingenious!

Flexibility in seating arrangements is a key attribute in any minivan and Honda has further enhanced the Odyssey's many seating configurations. There's room for eight people with the optional PlusOne seat that fits between the two captain's chairs in the second row. If it's not needed as a seat it can be turned into a table or stowed in the floor instead of the Lazy Susan bin. If the PlusOne seat is not being used, the right-hand seat can be slid across to allow easier access to the third-row seats.

The third-row “magic seat” is split 60/40 and folds down into the well provided for it much more easily than before, and the headrests do not need to be removed before folding.

The optional voice-activated DVD navigation system has been extensively updated and now includes Zagat restaurant data. The large 8-inch monitor is well positioned high up in the dashboard. The voice-activation system responds to 637 commands and is smart enough to understand different accents and find locations without any need for input other than by voice. Apart from navigation, the system can also be used to operate the radio and climate controls. Unlike other voice systems we've experienced, this one seemed to work effectively.

The available DVD entertainment system features a large 9-inch widescreen display that folds out of the ceiling. The wireless headsets turn on and off automatically as the ear pads are rotated.

There's a host of other small touches that have gone into upgrading the interior. From a driver's standpoint, changes include the gearshift lever, which is still mounted on the dashboard, but has been realigned so it has an easier longitudinal motion instead of vertical. The driver's seat has been redesigned so it holds the driver more firmly and is positioned in a more car-like setting. Power adjustable pedals are available in the Touring model.

Honda stated at the launch that its goal was to produce a minivan with the handling of a European sedan. We had the opportunity to drive the Odyssey for several laps around a race track and found it was pretty stable. It would be no contest with a BMW sports sedan, but it was surprisingly chuckable. That is, it was possible to drive hard into a sharp corner and feel the tires start to slip but without any drama. We could not feel much body roll and the Odyssey in front of us looked remarkably stable for a tall vehicle.

Perhaps the only disappointing aspect of driving the Odyssey was on smooth highways where there is still some on-center steering slack. You can turn the steering wheel a few degrees in either direction before the vehicle starts to move. It was no worse than in a Chrysler Town & Country, however, and many people will not notice as it's a common trait of many large cars and most SUVs.

During a test drive along country roads near the Honda factory in Alabama, we found the Odyssey offered a perfectly pleasant ride. It was neither too firm nor too soft. All in all, it's an ideal vehicle for a long-distance drive. The brakes worked fine and other than the sloppy on-center feel the steering was great for driving through corners more briskly than one would expect in a minivan. What's more, the turning radius is the tightest of any minivan, making it an easy to make U-turns and maneuver in parking lots.

Straight-line acceleration is good with a 0 to 60 mph time about one second quicker than other minivans, according to Honda. Despite having 255 horsepower going through the front wheels the van is almost totally devoid of any torque steer.

Every Odyssey includes Vehicle Stability Assist that works in conjunction with the drive-by-wire accelerator and ABS to modulate the brakes while managing the throttle and ignition. If the vehicle starts to lose grip on a tight turn on a slippery surface, the system automatically slows the engine and gently applies brakes to stop the vehicle from skidding out of control. In a test on a soaking skid pad we found the system works well. Fortunately it only works in emergency situations so it's not distracting during normal spirited driving. It can also be turned off.

Overall, the Odyssey belies its size and handles like a premium sedan. It's not as good as a decent European sports sedan but it's certainly better than an SUV. The vast majority of owners will find the Odyssey's handling and ride is pleasant for long drives as well as around town.

Road noise was a fairly common complaint thrown at the older Odyssey. Honda admits as much but claims that the new vehicle is much quieter with increased amounts of sound-deadening material and floating sub frames that keep suspension and tire noise more isolated. We had no complaints about noise while driving the different models.

The Touring model and the EX with leather benefit from high-tech noise-abatement features. When the i-VTEC engine with VCM is only running on three cylinders there is a natural imbalance, which can produce drumming sounds and vibrations. To counteract this, the engine is mounted on special active control engine mounts that electronically adjust themselves to counteract engine vibrations. Further booming sounds are reduced by an active noise control system that automatically sends an out-of-phase sound through the loudspeaker system to cancel out engine noises; it also works when the engine is idling.

The Odyssey's 3.5-liter V6 engine is smooth, powerful, clean and fuel efficient. The “intelligent” iVTEC V6 that comes on the EX with Leather and the Touring model gets better fuel economy than the standard VTEC that comes on the LX and EX: an EPA-rated 20/28 mpg City/Highway vs. 19/25 mpg. The iVTEC engine does this by deactivating three of the six cylinders whenever you're cruising. We were never able to discern when the engine was running on three cylinders as the

Honda has a tremendous reputation as a producer of reliable, sophisticated cars that are economical to run and have great resale value. The last generation Odyssey minivan produced from 1999 to 2004 proved that Honda could also produce a class-leading minivan, which has also enjoyed good resale value.

Instead of resting on its laurels Honda has totally redesigned the Odyssey and put it firmly back at the top of class even though some would say the old one was still at the top. Anyone who appreciates the versatility of a minivan coupled with the driving characteristics of a car will delight in owning an Odyssey. The Touring model is especially worth looking at if you're wanting a versatile luxury utility vehicle that rides like a car. Perhaps that's why Honda likes to call its new Odyssey a Premium Adventure Vehicle.