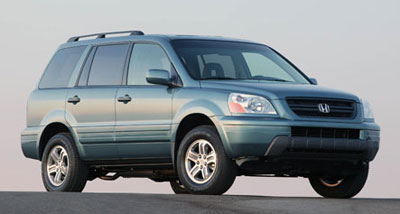 The Honda Pilot gets a new engine for 2005, giving it a significant boost in power, along with other revisions that improve this sport-utility.

The Pilot is the Honda of SUVs, practical, efficient, reliable, and powerful. That last one is aided by an all-new 255-horsepower 3.5-liter V6 paired with a five-speed automatic transmission and an advanced four-wheel-drive system. The Pilot drives more like a car than a truck, with the crisp, predictable handling for which Honda is known. Yet it delivers impressive fuel economy. As a Honda, it offers quality, durability and reliability.

Capable of seating up to eight passengers, the Pilot is not a small vehicle. It's larger overall than a Toyota Highlander and Nissan Murano it's wider than a Ford Explorer, and it offers more cargo space.

Option packages for the EX include the leather interior ($2,200) with heated front seats and side mirrors. The entertainment package ($3,700) includes the leather package and rear-seat DVD video system. The navigation package ($4,200) adds leather and a satellite-linked guidance system. A towing package and brush guards are available as dealer-installed accessories.

The Pilot gracefully borrows key styling cues from Honda's smaller CR-V. The grille and headlights are a careful enlargement of the CR-V's fluid wraparound face.

The wheel arches are aggressive enough to offset any impression that this is a toy truck, but subtle enough to be consistent with the Pilot's likely hangouts in upscale neighborhoods and suburban mall parking lots. Large Honda badges on the grille and liftgate make it clear that the company is proud of the Pilot, and expects customers to feel the same way.

Honda has limited the amount of matte-black plastic bodywork that seems to be increasingly popular on sport-utilities, and we appreciate that. Body-colored moldings give the Pilot EX a more refined, upscale look. The Pilot's only nod to this allegedly rugged SUVness is the step on the rear bumper (a good thing) and rubberized plastic guards under both bumpers. Roof rails are standard on the EX, but if you want the crossbars that actually turn them into a true cargo rack, you'll have to get them as an accessory from your dealer.

The Pilot can seat up to eight, but some of them best be small. The second-row seats are comfortable for adults, but the third-row seats are more suited for children.

The second- and third-row seats are slightly higher than those ahead, theater style, improving forward visibility for passengers. The second-row seatbacks recline, albeit with limited range. The second row can slide fore and aft, allowing leg room for the second and third rows to be adjusted according to the size of the passengers. Getting into the third row is aided by the seat design. Flip a lever and the second-row seatback pivots forward while the entire seat slides forward. The seat returns to its original position by pushing on the seat back.

Pilot's seating system is exceptionally versatile for handling a mix of cargo and people. Both rows of rear seats are split 60/40. The second-row seat folds away easily via a single lever and drops the seat flush to the floor. There are no gaps in the cargo floor as with some SUVs such as the Ford Explorer.

In terms of cargo capacity, the Pilot is among the best in its class. With both rear rows folded flat, the Pilot offers 90.3 cubic feet of cargo space. That's considerably more than the GMC Envoy or Chevy Trailblazer (80.1 cubic feet), Ford Explorer (81.3) or Toyota Highlander (80.6) or Nissan Murano (81.6). Moreover, the Pilot's load floor is four feet wide, allowing full sheets of building materials to fit inside.

Up front, the Pilot's bucket seats are spacious and comfortable. The LX model's manual seat adjustments are simple but effective. A driver's foot rest, or dead pedal, is standard on all models for 2005, a welcome addition. All controls are easily accessible by the driver. Visibility is excellent in all directions with as little obstruction as you'll find in an SUV.

In a particularly clever move, Honda made the largest dial in the center of the instrument panel a switch to shift the audio controls from front- to rear-seat audio. Several observers with young children immediately recognized this as the control they would use most, and they appreciated its large size and central placement. The other instruments and controls will be familiar to anyone who has driven a Honda. The company seldom varies much from the layout that for decades has proven to be a model of ergonomics. Most of the Pilot's switches operate with a satisfying, positive action.

All is not perfect inside the Pilot, however. The minivan-like column shifter is spindly and moves in an ovoid path, like that of the Odyssey. The thin, sliding plastic lid over the center console works fine, but is not aesthetically appealing and sounds cheap when you drop a set of keys on top of it. Buttresses on the sides of the center console look like they'll collect detritus. The fold-out cell-phone holder with a power outlet seems at first a nice feature, but blocks the two cupholders in front of it.

Nonetheless, the console provides plenty of storage space in a compartment behind the cell-phone holder (where our cell phone ended up most of the time). A covered compartment located below the Pilot's center stack provides more storage in the space between the console and the instrument panel.

The Pilot is loaded with kid-friendly stuff. There's a cupholder for every seat and pockets on the seatbacks in the first two rows. The EX includes a second-row fold-down activity tray with more cupholders and storage for pocket-sized electronic games or fast food, including a little spot that cradles sauce containers.

The optional seven-inch DVD screen doesn't take up much space when not in use yet it's easily viewed from all of the rear seats when deployed from the headliner. Audio and video input jacks are provided for a variety of electronic accessories, from camcorders to portable VCRs to game consoles. The system includes two sets of cordless headphones, with jacks for three more wired s

The Honda Pilot shares its platform with the Acura MDX sport-utility and Odyssey minivan, both highly successful vehicles. Like the MDX and Odyssey, the Pilot is a joy in daily use. We found it easy to maneuver and park in crowded parking lots.

The Pilot shares mechanical features (engine, transmission, all-wheel-drive system, and brakes) with the more expensive Acura MDX, and it shows. The Pilot's road manners seem just a little better than necessary to compete in this class. Pilot was developed primarily for highways and city streets, though its ground clearance, suspension travel and standard tires are fine for light off-highway duty.

The new 255-horsepower 3.5-liter V6 is more than adequate to propel the Pilot, which weighs in at 4400 pounds. Acceleration is excellent, particularly in the 30-60 mph range that matters most in daily use. The Pilot outguns the V6-powered Toyota Highlander by 25 horsepower. More important, the engine produces 250 pound-feet of torque from 3000 to 5000 rpm, slightly more than the Toyota V6. The big 4.2-liter six-cylinder in the Chevrolet TrailBlazer and GMC Envoy produce 275 horsepower and 275 pound-feet of torque, but are based on truck chassis and are about 200 pounds heavier than the Pilot. They don't have five-speed automatic transmissions and their fuel economy is slightly lower.

The new Honda engine features a broad and flat torque curve, very low emissions and high fuel economy. The new drive-by-wire throttle replaces a conventional throttle cable with an all-electronic system that relays throttle pedal position to the engine computer. The new system reduces overall weight by incorporating the cruise control system and reduces shift shock by communicating with the transmission during up- and down-shifts.

The Pilot's five-speed automatic transmission shifts smoothly and precisely, even under hard acceleration. It benefits from Honda's Grade Logic Control system, which monitors throttle position, speed and acceleration to avoid hunting between gears. The transmission's computer controller holds lower gears longer than normal for better performance going up hills, or to provide engine braking on downhill grades. Fourth and fifth gear ratios have been revised for 2005 to improve fuel efficiency.

The all-wheel-drive system is Honda's full-time VTM-4 (Variable Torque Management 4WD) with an electronically locking rear differential. Most power is delivered to the front wheels, but Honda's AWD is a bit more proactive than most similar systems. Based on a front-drive layout, Honda's system doesn't wait for the front wheels to slip to spread the power around; it sends some of the power to the rear wheels any time the driver accelerates. The push-button differential lock improves traction in extremely slippery or stuck conditions by making sure both rear tires get power. So equipped, Honda rates the Pilot for what it calls medium off-road duty, including 30-degree dirt grades.

Need true off-road ability to climb steep, unpaved hills or traverse bolder fields? The Pilot won't fit the bill. Need to make it down a rough dirt road to a cottage on the lake, or along a forest trail to an undeveloped campsite? Pilot is up to the job.

Overall ride and handling compares better to midsize cars than to truck-based SUVs. The Pilot is stable at highway speeds, nimble in parking lots and sufficiently well-damped to run over winter-buckled and pothole-laden urban streets without discomfiting its passengers. The steering wheel transmits road conditions enough to keep the driver informed without jerking the wheel at every pavement disruption. Passengers in the second-row seats found the ride equally comf

The Honda Pilot is a reasonably priced, good-looking, practical sport utility that offers exceptional interior space, excellent comfort and good power for the money. It brings Honda values, including an overall efficiency of design and operation, excellent build quality and a reputation for reliability to the medium-size SUV class. It also brings Honda's pricing strategy, which means choices for individual options are limited. You'll have to buy the high-trim EX if you want any options.

If what you need more than anything is the family-friendly versatility of a minivan, with the security presented by all-wheel drive and the higher seating position of an SUV, then give Pilot serious consideration. In a world where many SUVs take up far more space than their utility justifies, and drink far more gas than their performance merits, the Pilot is a breath of fresh air.