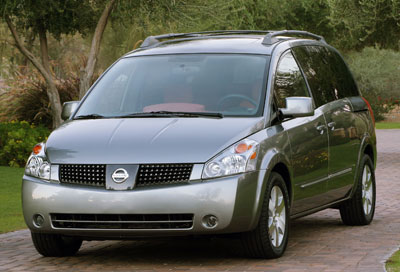 To paraphrase Nissan, the Quest is the cure for the common minivan. It eschews soccer mom styling for radical design. It boasts a powerful V6, the same engine used in the Nissan 350Z. Its smooth five-speed automatic would be perfectly at home in an expensive luxury car. Crisp steering, responsive handling and good high-speed stability make it more fun to drive than other minivans.

Its radical styling carries through inside with jetliner-style seats, optional Skyview glass roof panels and centrally located instrument cluster and secondary controls. Its cabin is comfortable and innovative. Its back seats are roomier, more comfortable, more functional and more interesting than those in other minivans.

The Nissan Quest ranks among the largest of the minivans. It's also one of the most versatile. Its long wheelbase, wide track and radically arching roofline contribute to its practicality: Its sliding doors open wider than those on other minivans. It boasts the latest features, including power sliding doors and a power rear liftgate, power rear-quarter windows, a sonar park-assist system and overhead mood lighting. And it can tow up to 3500 pounds.

Nissan introduced the Quest as an all-new model for 2004. The 2005 Quest starts at a lower price with the addition of a new base model.

The S model ($24,550) adds power for the right-side sliding door and liftgate, and auto up/down power windows with safety reverse

The list of factory-installed options is relatively short. The Seat Package ($350), which nearly every Quest has, provides fold-flat captain's chairs in the second row, with cupholders and an easy-entry feature, a fold-flat bench in third row with grocery-bag hooks, 3-point seat belts, and LATCH-style child safety seat anchors.

The DVD Entertainment Package for base, S and SL ($1,500) includes a DVD drive mounted under the front passenger seat, a seven-inch color screen, remote control, auxiliary inputs, rear-seat audio controls and two wireless headphones. A dual-screen version of the system ($1,900) is available exclusively for the SE. A GPS navigation system ($2,000) with DVD storage is available for the SE and for SL models with Bose audio. It features a seven-inch display mounted in the center meter cluster. About a dozen port- or dealer-installed accessories are available, including a tow package ($550) that gives Quest a towing capacity of 3500 pounds, running boards ($560), and a choice of XM or Sirius satellite radio ($400).

The Skyview Roof option ($1500), available only on SE and SL models with the Upgrade package, consists of a power glass sunroof over the first row plus panoramic glass panels over the second and third rows; the package includes sunshades and a full-length overhead console.

Nissan's designers have tried hard to make the Quest look different from a traditional minivan. Gone are the slab sides and flat roof. Instead, the Quest gets bold fender flares that run along the sides with shoulders that sweep up as the lines blend to the rear. The result is a vehicle with curvaceous character lines that does not look nearly as big as it is in reality. Part of this illusion is due to the long wheelbase with relatively short overhangs at front and rear.

Quest has dual sliding side doors, as expected, but they are four inches longer than those on other minivans. That makes getting in and out easier, especially to the third row of seats. The sliding doors work very well, and will open simultaneously from a distance when the buttons on the remote are pressed, though they seem reluctant to respond at times. The sliding doors have pinch protection, but seemed to push pretty hard before deciding the passage was blocked and reversing direction. Due to the swept-up hipline, the slot for the door runners is in the middle of the bodywork rather than being disguised along the lower edge of the side windows.

The power tailgate works well, also. I was able to interrupt its opening by pressing the remote again when I noticed it was parked too close to a tree to swing open. Again, it was slow to respond to the remote.

While people rarely comment on minivan interiors, the cockpit of the Quest nearly always draws remarks from those climbing in for the first time. Some of the interior schemes are wild, particularly the Rouge leather, with seats that look like they were made from baseball glove and a dash that looks and feels like the material on a basketball. It's bright, fun and will wake you up better than a grande cappuccino. Doors are trimmed in an alcantara-like cloth that feels nice to the touch, along with black vinyl and aluminum-colored plastic.

Most unusual is the instrument cluster centered on top of the dashboard instead of in its usual location ahead of the steering wheel. This move has allowed the designers to make the top of the dashboard much lower for improved forward visibility and a feeling of spaciousness. It takes a little acclimatization as we're used to the looking through the steering wheel for the instruments, and the shifter is not located where you naturally reach for it. The screen for the optional navigation system is located in this same pod, just to the right of the gauges. A small slot ahead of the steering wheel is useful for holding directions, a map, a to-do list or maybe a photograph.

Also unusual is an oval-shaped pod that houses the climate and audio controls and shifter. This flat panel rises like a barrel from the center of the dash and is finished in a black material that's soft to the touch. The buttons and knobs for the climate controls are big, but seem more awkward to operate than a traditional design. Not so unusual is the functional but mundane steering wheel similar to what's found in most Nissans. Overall, though, the Quest cockpit is pleasing and sporty.

The Skyview roof is a neat feature, appearing from the inside as four glass panels over the rear seats. The glass panels cannot be opened or removed but can be covered by a sliding blind. They help make the rear seating area much less claustrophobic by opening up the sky and letting the kids (and adults) see trees, airplanes and mountain tops, adding to the airiness of the spacious cabin. Nissan chose opaque shades to slide over the glass panels, much better for blocking unwanted sunlight than the mesh covers used by some manufacturers. The Skyview package comes with a traditional power glass moonroof between driver and front passenger.

When equipped with the central roof console and optional DVD entertainment system with two monitors, you feel like your seated in a first-class Lear jet. This is one minivan where kids may fight to see who sits in the back seats.

The interior dimensions are enormous, making the Quest incredibly roomy. Yet rearward visibility is good from the rearview mirror and cleverly shaped outside mirrors.

The seats are an unusual design. Far less bulky than normal, they look like airline seats when viewed from the side. In spite of their Spartan appearance, we found them more comfortable and more supportive than the fancy, cushy seats in uplevel models of the Toyota Sienna.

The second-row seats are very roomy, very comfortable, more so than those in the Toyota Sienna, which were cushy, lacked lumbar support and had short armrests that sit at the wrong angle. The Nissan features comfortable arm rests are provided on both sides of the second-row seats. The available overhead storage is handy for regular back-seat riders. Cup holders are conveniently attached to the rear seats, while holders for big bottles are incorporated into the sliding doors. Big grab handles mounted cleverly on the B-pillars should assist those of diminutive stature when getting in.

Quest's third-row seats are among the most comfortable we've experienced in any vehicle. They're among the very few suitable for one or two adults. The third-row seatbacks recline, adding comfort, and there's more legroom than in the third rows in other minivans and SUVs; in fact, there's as much legroom here (41.2 i

The Nissan Quest is more of a driver's car than most minivans. It feels natural and is very easy to drive.

The Quest's suspension is taut. Compared with other minivans, its handling is more responsive. The Quest leans less in corners, the nose dives less under braking and the rear squats less under acceleration. The steering is crisp, with just the right amount of feedback to let the driver feel connected to the road. Yet it's not too tight for around-town use.

Quest shares chassis components with the Nissan Murano crossover utility and Altima and Maxima sedans. Its suspension provides good handling for a big vehicle. No, the Quest doesn't handle as well as the Maxima, but it certainly feels far more stable in corners than a sport-utility and it handles better than a Toyota Sienna.

Quest's 3.5-liter engine is one of the best V6 engines on the market. It's essentially the same engine used in the 350Z and Infiniti G35. Retuned, it produces 240 horsepower with a decent torque curve, peaking at 242 pound-feet. Nissan's variable valve-timing system helps optimize efficiency at a wide range of engine speeds. We found it delivered enough power to let the Quest accelerate onto on-ramps and pass slower vehicles on two-lane highways at a respectable rate. The throttle seemed a bit sensitive at tip-in, however.

You'll have to spring for premium fuel to extract the maximum amount of power from the engine. Quest will run on regular unleaded, but its engine controller knows you've bought the cheap stuff and dials back the ignition timing to protect the engine from damage. As a result, power sags to 230 horsepower and 238 pound-feet of torque on regular. Speed costs money.

The Nissan Quest offers innovative styling and interior versatility and brisk performance and handling. It's like a Maxima in minivan clothing. It's roomy and comfortable even in the very back seats. Quest can be trimmed as a first-class cabin four all passengers by opting for the leather upholstery, DVD entertainment system, Skyview roof and other features. The first of the 2004 models suffered some quality glitches but Nissan insiders say the 2005 models are better.