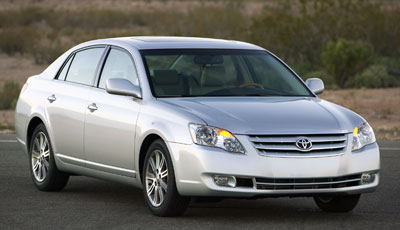 Toyota Avalon is all-new for 2005, completely redesigned and re-engineered from the ground up.

First introduced as a 1994 model, the Avalon was designed as an alternative to full-size sedans such as the Ford Crown Victoria, Chevy Caprice, and Buick Roadmaster.

Now, 10 years later, the all-new 2005 Avalon has morphed into four models, each with slightly different priorities, to broaden appeal across more diverse age groups and income levels. It has always been aimed at drivers who appreciate quality and comfort, but prefer an understated way to get it.

By far the most American of any Toyota, the 2005 Avalon was designed in Newport Beach, California, engineered by the Toyota Technical Center in Ann Arbor, Michigan, and built in Georgetown Kentucky. Toyota gathered extensive consumer and owner body feedback before redesigning it.

This third-generation Avalon is more distinctive than before, with apparent grace and agility. It is significantly larger, with special attention paid to rear-seat passenger comfort. Horsepower has been increased by 33 percent by adding an all-new double overhead-cam V6, which is teamed with a state-of-the-art electronically controlled five-speed automatic transmission.

All Toyota Avalon models come with a 3.5-liter V6 and five-speed automatic transmission with sequential shift.

Optional on both XLS and Limited are a navigation system and dynamic laser cruise control.

The Toyota Avalon has never been known for daring styling, and at first glance the new Avalon seems to offer only subtle changes. Yet, with just a few well-defined design strokes, the new Avalon manages to project more character, more contemporary energy than ever before.

A good part of this new image comes from a wider, longer stance. The size of the car, five inches longer than the previous-generation (pre-2005) model, is emphasized from the rear, where a tall rear deck, large tail lamps and dual rear exhaust outlets suggest an expensive touring sedan. The handsome rear deck line remains undisturbed by a wing, except in the Touring grade, which mounts a rear lip spoiler consistent with its sporty wheels and brighter accents.

The front of the Avalon is dominated by a horizontal grille, with chrome-accented bars, and a wide lower intake valence calling attention to greater width. The lines created by the valence are extended by use of fog lamps on the Touring, XLS and Limited models.

The effect is to create an expansive definition of an elegant, if unassuming, sedan. And it works. Side by side with the 2004 model, the all-new 2005 Avalon appears sleek, powerful, and advanced.

The Avalon interior is remarkably clean and uncluttered. Retracting lids hide audio controls and the navigation system controls, so the dash and console design avoids a sense of undue complexity. The action of the retracting covers is slow and measured, with the look and satisfying feel of high-end audio equipment. The result is a dash and front compartment that is simple and sophisticated at the same time.

Rear legroom is particularly generous with three-across seating facilitated by elimination of the rear hump. At one point we rode in the rear seat, directly behind a six-foot driver, with legroom to spare. In fact, enough room that we could imagine the Avalon as a taxi cab.

Part of the rear-seat comfort is due to the fact that the seats offer 10 degrees of adjustment to create five sitting positions. As the backrest is reclined, headroom is increased, so people of varying heights and sizes can be comfortable in the back.

The trunk is family sized as well, with a pass-through door for long gear such as skis. Wood accents, particularly on the Limited, are attractive and judiciously placed. The chrome door scuff plates on the Touring grade, particularly, are notably attractive and distinctive.

The Optitron instruments are elegant and technically appealing displays, round as in the previous Avalon, but unmistakably advanced.

We drove Toyota Avalon Limited and Touring models in and around Carmel-by-the-Sea in Northern California where roads varied from twisting mountain passes to two-lane highways and breathtaking circuits along the Big Sur section of Highway 1.

We quickly discovered the Avalon is the kind of car that will never annoy you, a car best characterized by the absence of noise, vibration or harshness.

The seats are an example. They are well cushioned, power adjusted, and have memory functions, as you would expect. Setting out on a damp morning, we quickly found the heat feature and warmed ourselves against the coastal fog. As the hours rolled on, we lengthened the lower seat cushion, which extends by a few inches to add support, and finally, when the afternoon sun burned through and the valley heated to 80 degrees, we used air-conditioned vents in the seats. (The cool air is actually driven up through channels in the foam and through perforated leather.) In short, these are seats that will not permit any form of discomfort, no matter what the conditions. They provide an apt analogy for the entire car, a vehicle possessed of small comforts that add up to a satisfying environment to calm the pickiest driver.

Another example: The Smart Key on the Limited. To use it, we just walked up to the car. At a touch, all four doors unlocked. We sat down. Foot on the brake, we touched the Start button and the car hummed, more like a computer than an automobile. There is no key, no fumbling, only a perfectly convenient entry.

Like the rest of the car, the suspension is set up primarily for comfort. On tight roads some body roll can be induced. Yet the Avalon held any reasonable line through a corner we cared to strike, protesting only at careless tossing, absorbing pavement irregularities at the apex with little apparent concern. It's a front-wheel-drive configuration, with struts controlling L-shaped lower control arms, and a multi-link/strut arrangement in the back, so the car tends to squat slightly coming out of corners, and pull through them from the front. Handling, if not highly sportive, is extremely well balanced.

The Touring grade, by contrast to the Limited, is set up for sharper handling performance, with stiffer 17-inch wheels, Michelin MXV4 tires, and stiffer shock tuning. It has quicker reflexes, at the expense of some ride comfort and noise control, but does supply a very secure, on-center feeling through the twisties. Steering, in both cases power rack-and-pinion, manages to avoid the over-assisted vagaries common to large SUVs and domestic family sedans.

The engine and transmission provide unobtrusive performance. As the car slowly transformed us from aggressive testers into relaxed tourists, we loafed along, absorbing local color and the flavor of the environment. Fifth gear is a very relaxed overdrive, allowing the engine to maintain cruise with minimal effort. As we mixed with commuters and lunch-break traffic, the car remained understressed, quietly relaxed, and undemanding.

Later in the day, we addressed a steep mountain pass with some determination and were rewarded with 280 horsepower backed by a five-speed automatic that knows when to shift. Our speeds were in the 30 to 50 mph range when we began to operate the transmission in manual mode, tap-shifting from 2nd to 3rd gear and revving up and down through the corners.

The V6 pulls strongly at higher rpm (and right up to the 6200 rpm redline), but remains remarkably quiet in the process. It's a 4-valve, double overhead-cam power plant, with aluminum block and heads. The short stroke means that it likes to rev, and it has very low reciprocating mass, with very low friction cam gear. These are the characteristics of a long-life, efficient everyday car engine with exceptional passing power. Our forays into canyon carving were not perfectly consistent with this type of design, and yet they were not frustrating, either. The horsepower is there,

The all-new 2005 Toyota Avalon is markedly improved, with more power, more room and an expansion of the model line to four different models. It's a car developed by Americans, built in America, that takes full advantage of the latest technologies in safety, efficiency, and performance. More than anything, the new Avalon offers a stronger individual presence, and a clear step up from the Toyota Camry.