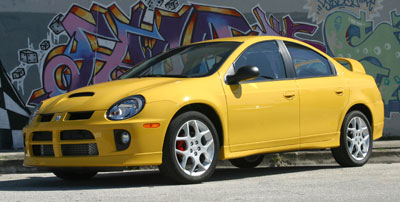 The Neon is practical, inexpensive and roomy, and plenty fun to drive. It's quicker than most cars in its class and it feels sporty on winding roads, with a good balance of ride quality and handling agility. Relatively long suspension travel helps Neon avoid bottoming out on bad roads, and it gets good fuel mileage. Best of all, the models on the lots now promise better deals than ever.

That's because the Neons sold in 2006 will be straight carryover from 2005. Dodge will stop building the current Neon at its Belvedere, Illinois, factory to retool for an all-new small car for 2007. Yet before that new car hits showrooms, there will be plenty of the current Neon models left to sell. In any circumstances, the Neon is a solid car at a good price, typically with some heavy dealer incentives. In 2006, smart shoppers should be able to buy Neon at clearance prices.

The frugal Neon SE ($13,800) comes with the essentials and not much more. The SXT ($16,110) comes loaded with popular features, before the sales incentives, and it can be decked out with plenty of appearance items.

Driving enthusiasts love the Neon SRT4 ($20,700), which boasts a 230-horsepower turbocharged engine, sports suspension, heavy-duty gearbox, four-wheel anti-lock disc brakes and 17-inch performance tires. While it's much more expensive than the other Neons, the SRT4 delivers a lot of bang for the buck. It's the most powerful compact you can buy, and it's fast. Of course, those who don't appreciate the SRT4's improved handling may think its ride is too stiff, but this Neon has typically sold for full sticker. The 2006 sell-down may or may not change that.

The Dodge Neon is a compact, five-passenger, front-wheel-drive sedan available in three models: the basic SE, the well-equipped SXT and the high-performance SRT4. The SE and SXT are powered by a 2.0-liter, 132-horsepower four-cylinder engine.

The Neon SE ($13,800) is spartan, to be sure, with wind-up windows, manual door locks, and 14-inch steel wheels. Its mirrors and moldings are black, though it does come with tilt steering, a 60/40 split folding back seat, AM/FM/cassette stereo with four speakers and vanity mirrors. A five-speed manual transmission is standard. Options for the SE include air conditioning ($1,000), a four-speed automatic transmission ($825), AM/FM/CD stereo with six speakers ($175), and cruise control ($250).

There are also several appearance tweaks available for the SXT, starting with a trunk-lid spoiler ($100). The economical Sport Appearance group ($150) includes the spoiler, fog lamps, body-color or satin-silver bezels on the dash and unique 15-inch aluminum wheels. The SRT Design Package ($895) gives the SXT the look of the high-performance SRT4 by adding a power bulge on the hood, unique front fascia, and dual exhaust tips. Colors are limited to Blast Orange, Bright Silver, Flame Red, and Black. Finally, a Special Edition package ($945) includes chrome wheels, the Kicker audio with CD changer, and an alarm.

The Neon SRT4 ($20,700) comes with a turbocharged 2.4,-liter dual-overhead cam inline-4 rated at 230 horsepower. It also features a heavy-duty five-speed manual transmission, limited-slip differential, 17-inch aluminum wheels with 50-series ultra-high performance three-season tires, high-performance suspension, Viper-inspired sport seats and special trim inside and out, including bright pedal pads. The SRT4 is not offered with an automatic. The sunroof is optional, as is an even more powerful Kicker audio package ($795).

The ACR package ($1,195) for the SRT4 actually takes content out of the car to trim weight, and includes a true race suspension. We absolutely do not recommend ACR for anything other than track use.

Safety features on all Neons include front-impact airbags, three-point belts at all seating positions, the LATCH child safety-seat anchor system, an emergency inside release for the trunk lid and child-protection door locks.

Four-wheel disc brakes with ABS and Electronic Brake-force Distribution (EBD) are standard on the SRT4 and optional ($695) on other Neons. Side-impact airbags are optional ($390) on all Neons. We highly recommend both options, but particularly the ABS, which allows a driver to maintain steering control in a panic-braking situation.

For years Dodge made some effort to distance the high-performance SRT4 from other Neons, even calling it the Dodge SRT4 in promotional literature, dropping the Neon label entirely. The concept seemed to make even less sense when Dodge decided to offer an SRT Design package for the standard Neon SXT. This borrows a number of the appearance tweaks previously reserved for the high-performance model.

The air intake in SRT4's deep front bumper/air dam looks like an inverted version of the standard Neon grille, with two square openings where the standard grille would otherwise be. Just behind the lower opening sits a cast-aluminum intercooler; Dodge left it visible in keeping with the car's racy intent. A functional hood scoop and fog lamps set into what look like brake cooling ducts emphasize SRT4's road racer demeanor.

Out back, the SRT4's basket-handle spoiler is designed to look outrageous, and it succeeds. (It restricts rearward vision, but not unduly.) Sill-mounted ground effects give SRT4 the look of a sport compact. Big tires fill the wheel wells. The SRT4's 17-inch wheels are designed to channel air to the brakes to help keep them cool.

The Neon is roomy inside. In fact, an accommodating cabin is one of its strengths compared with some of the other compacts. The driver sits high for good visibility, and the front seating area has lots of hip room and legroom.

Back-seat passengers benefit from the Neon's big interior, as well. The rear seat is not a bad place for short- to medium-length trips, even for average-size adults.

The trunk is about average for the class at 13.1 cubic feet. Gooseneck hinges intrude into the cargo space, but afford a relatively large trunk opening. Lift-over height is on the high side. The rear seat splits 60/40 and folds down for carrying additional cargo.

The standard Neon SXT seats are quite comfortable, cushy and supportive. The side bolster appears a bit soft, but felt fine while driving. The cloth upholstery feels good and looks durable. Vinyl trim on the front edges of the seats gives them a nicely finished look.

Dash and door trim are made of a premium material that's soft to the touch, providing an attractive appearance and feel and avoiding the plastic look that afflicts so many compacts. The Sport Appearance and SRT Design packages include body-colored bezels around the gauges that add a racy accent to the SXT. Map lights are mounted on the rear-view mirror, not the best location as your co-driver may accidentally adjust your mirror when using the light switch. Most switchgear is easy to use and works well, though the turn signal stalk on our test car wasn't smooth. The standard stereo sounds mediocre, and having to press a button to get the key out of the ignition slot is annoying and archaic.

Our SRT4 test car had special interior trim, including a satin-silver center stack, shift knob and door handles. The SRT4 seats are modeled after those in the Dodge Viper sports car, with enhanced lumbar and lateral sections for better support when cornering. Agate-colored cloth is designed to grip the driver. Cast aluminum pedals look like those in race cars. A turbo boost/vacuum gauge sits to the right of the instrument cluster, underneath the dash brow, hinting at the extra performance under foot.

The Dodge Neon is fun to drive. It offers sporty handling and good acceleration, though it's not the smoothest nor the quietest compact car on the road. In short, Neon isn't the most refined car in its class, as demonstrated by its standard engine.

This single-overhead-cam 2.0-liter four generates good power. A Neon SXT can accelerate from 0 to 60 mph in about 8.5 seconds, which makes it quicker than many more-expensive compacts. Yet the engine doesn't have a lot of torque down low in the rev range. (Torque is that force that propels you from intersections and up hills.) Step on the gas while cruising at 3000 rpm and the Neon gathers speed slowly. There's a small rush of power that starts somewhere around 4000 rpm, but there isn't great gobs of it, and it doesn't really build momentum until past 5000 rpm. Nor is the 2.0-liter engine particularly refined, and its boomy, raucous behavior is transmitted into the cabin as vibration and noise. The manual gearbox works well enough, but has a clunky feel.

The suspension nicely balances ride quality and handling agility, making the Neon fun to drive on winding roads yet pleasant when cruising around. The Neon responds well in emergency lane-change maneuvers. Soft springs and premium shocks are tuned to enhance the Neon's ride quality. Its fully independent, strut-type suspension offers high ground clearance and long jounce travel, which reduces the chance of bottoming under heavy loads. When we hit a sharp dip, the Neon's suspension was soft enough to absorb the harshness. Yet it was firm enough and had enough travel to avoid bottoming out. As a result, the front of the Neon did not scrape on an abrupt dip on our test route where many others have scraped before. This makes for a more comfortable ride, with less need to slow to a walking pace for dips in the road.

The standard brakes stop the Neon quickly and are stable under hard use. Indeed, the Neon stops more quickly than many of the cars in its class, despite the handicap of rear drum brakes. We nonetheless recommend the optional four-wheel disc brakes with ABS. Whether the roads are slippery or dry, the antilock brake system helps drivers maintain steering control in panic braking situations. Disc brakes are less likely to fade when braking frequently coming down on mountain roads than are the standard rear drums.

The Neon SRT4 was developed with input from Dodge engineers who spend their weekends racing at Sports Car Club of America events. It delivers serious sport compact performance.

The SRT4's turbocharged engine develops an impressive 230 horsepower at 5300 rpm and 250 pound-feet of torque from 2200 to 4400 rpm. The broad torque band means less shifting under normal driving conditions, but it also serves up impressive acceleration when you floor the gas. The SRT4 can accelerate from 0-60 mph in just 5.8 seconds, or much quicker than many cars costing twice as much. A torque-sensing limited-slip differential provides more traction when accelerating out of the corners. The Z-rated tires were developed to match the SRT4's suspension and handling characteristics, with a tread pattern and rubber compound that maximize grip for cornering, accelerating and braking. Disc brakes with ABS and electronic brake distribution (EBD) are standard on the SRT4. They work well, and the pedal feels good.

Dodge Neon's strength lies in its value. On the positive side, Neon is roomy, comfortable and plenty fun to drive. On the negative side, it is less refined than the Toyota Corolla and Honda Civic. Few competitors deliver as much as Neon for the money, and the deals this year should be better than ever. No competitor comes close to the brute strength or performance built into the Neon SRT4, unless you rank $30,000-plus sports cars as competitors.

NewCarTestDrive.com editor Mitch McCullough is based in Los Angeles.