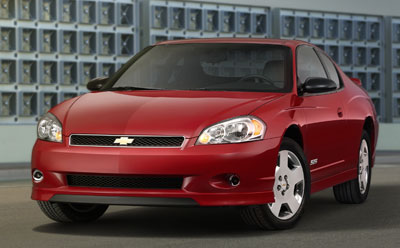 Never mind the NASCAR association; or the bad-boy reputation. Never mind that the Chevrolet Monte Carlo is as quick as it looks, with a 303-horsepower, variable-displacement small-block V8 as its top engine choice. Never mind the neo-muscle-car image the Monte Carlo carries. The Monte is primarily about style. Always has been. Always will be.

The Monte Carlo was born in 1970 as a high-style variant on a more mundane mid-size sedan, and as a high-value alternative to more expensive personal luxury coupes. Its mission, at which it succeeded brilliantly, was to deliver a lot of visual importance for relatively small monthly payments. A big-bore SS version was there from the start, but initially the SS sold at a trickle compared to a torrent of base-model coupes with all the luxury options.

The Monte quickly developed a dual personality: Although conceived originally for visual effect, its unusual proportions seemed to give it an edge in handling balance at medium-length NASCAR oval tracks. By the late 1970s, the Monte Carlo was Chevrolet's standard-bearer in stock-car competition. Then with each successive generation, Chevrolet refined the Monte's shape to improve its high-speed performance. The Monte Carlo is now the winningest nameplate in the history of NASCAR, which is certainly something to crow about.

Something comes over us when we're in a Chevy Monte Carlo. It's hard not to fantasize we're rocketing down the front straight at Talladega with 42 stock cars glued to our rear bumper. Or maybe we're going through the inner loop at Watkins Glen, bounding off the curbs as we go through the big chicane. The Monte just has that look about it. It has that feel about it, too, making it an enjoyable and appropriate car for winding down a rural road in the South with the windows down. It still draws admiring looks in these parts.

Last year, 2006, Chevrolet face-lifted the Monte Carlo. The new look is smoother, more mature, more sophisticated. At the same time, a V8 engine became available, for the first time in a Monte Carlo since 1987. Changes for 2007 are relatively minor.

We always bond with the Monte Carlo whenever we drive one. It's roomy and comfortable and easy to operate. Despite its race-track breeding, the Monte Carlo offers more interior volume than any of its non-GM competition. It's fast and fun to drive. It's stable at high speeds for long runs down the interstate and it's great fun on back roads, the same kind of roads that form the roots of stock car racing. The SS promises the kind of performance that Monte Carlo buyers haven't seen in a long time, along with a chance to feel connected to a winning tradition.

We're expecting this to be the last year for the Monte Carlo, with production ending in August 2007. So act now if you want to buy a new one.

Optional on all Monte Carlos are an engine block heater ($50); remote starter preparation ($30); and seat-mounted side-impact airbags ($350). New last year, the dual seat-mounted bags replaced a single door-mounted bag on the driver's side only, and help optimize head and torso protection for the driver and front passenger.

Chevrolet says Monte Carlo buyers usually cite styling as a major influence on their purchasing decision. And, certainly, nothing else looks like a Monte Carlo. The Monte's sharply creased quarters and thick rear roof pillars represent a design heritage now 38 years old. At the same time, the current model is as modern as the latest computer simulation, refined in the wind tunnel for maximum stability with minimal drag.

The folks who own them love them. To us, however, the current Monte Carlo looks as if it were designed by a committee. Individual elements are attractive, but we're not quite satisfied with how they hang together as a whole.

We do, however, like the effects of last year's facelift. The front end, particularly, is much smoother and does hang together better visually than before. Where previous Montes breathed through two narrow air slots above the bumper and a cheap-looking body-color mesh below it, the new design features blacked-out rectangular openings top and bottom, with a prominent gold Chevy bow-tie front-and-center. Similarly, the old Monte's odd frog-eye headlamps have given way to a more conventional shape housing three independent lighting units. Chevrolet says the new lamps are not only better looking but are more effective. The front air dam is deeper, smoother, and looks much less like something taped on in the heat of battle. The overall effect is far more handsome. Above the bumper, particular, it's also very similar to the recently restyled Impala, but that's not necessarily a bad thing.

And if the front end is a little less distinctive, well, there's still no mistaking the Monte's silhouette when you move around to the side. Even here, however, Chevrolet has cleaned up the design, with a wider and more subtle protective molding mounted lower on the body; and better-integrated sill extensions. Around back, too, much of the fussy detail of the old design has been shaved off for a cleaner, more grown-up appearance. Gone (and good riddance!) are the frilly air slots in the lower bumper extension, replaced by a solid black panel that nicely frames the SS model's dual exhausts. And the reverse lights, which before looked tacked on to the bumper at random, now extend in elegant oblongs from either side of the license plate opening.

The Monte Carlo SS is distinguished by a black-diamond crosshatch grille, and a purposeful rear spoiler that emphasizes the car's NASCAR heritage. Corvette-inspired bright exhaust outlets also are standard on the SS, and a new Rally Stripe package is available.

The interior of the Chevy Monte Carlo was restyled for 2006 for a cleaner, simpler, and more tailored appearance. The optional Nuance leather-covered seats feature deck seams around their perimeter and French seams on the center cushions. The seats also have firmer cushions and increased lumbar support that provide more comfort, especially during long drives.

A substantially revamped instrument panel brings a new instrument layout and center-stack controls. The fundamental shape hasn't changed, but a combination of new bright metal trim and less shine from surfaces that aren't supposed to have added a look of value. A more modern-looking, square-topped shift lever has replaced the previous model's quaint T-handle. Generally crisper lines, especially in the steering wheel hub, definitely aid the upscale impression. Materials have been improved throughout the interior and trunk.

We found the bucket seats quite comfortable for around-town driving. Their shape makes it easy to get in and out of the car. Both seats are easy to adjust, and there's plenty of range for short and tall drivers, though headroom was lacking for a 6-foot, 3-inch driver who sat in the car.

This is an easy car to operate. Turning on the headlights feels like a step back in time: Just pull the big knob on the left. The steering wheel in the SS features well-designed audio and cruise controls. The cruise control works well, though you may have to look at it initially to position your thumb. The cockpit-style dashboard separates the driver completely from the front passenger and provides fingertip access to every system in the array. It's a nicely styled package, and for the most part is works, although the tall center console is a bit intrusive for drivers who like to shift the automatic transmission manually.

The instruments are straightforward, well-laid-out and easy to read. The gauges were redesigned last year but still feature black backgrounds, white markings and red needles, which make them not only look racy but also easy to read and scan.

Audio systems on the 2007 Monte Carlo feature new, simple-to-operate radios that are compatible with the OnStar system. The base setup comes with six speakers and CD/MP3 capability. A Bose system with eight speakers is available. Order XM Satellite Radio and you get a two-line, 32-character reconfigurable display and the capability to select between AM, FM and XM stations without having to reset the frequency. An in-dash six-CD changer is also available. All radios include a standard auxiliary input for external devices, such as an iPod or MP3 player, to be played through the vehicle's audio system. The input is located in the lower right corner of each radio.

The trunk is large, but the opening is relatively small, making it difficult to load big boxes.

The Chevrolet Monte Carlo chassis was significantly refined for 2006, and these improvements carry over for 2007. A more robust front-end structure provides a firmer foundation to help reduce noise, vibration, and harshness (NVH). It also provides improved steering and handling performance. Fully boxed upper frame rail assemblies have a wider, deeper, and structurally stronger upper front tie bar. Stronger ties between the upper and lower rails stiffen the front structure for improved ride and handling; and a large panel down in front of the dashboard has been strengthened. It is constructed from Quiet Steel, a laminate of sound deadening material bonded between sheets of steel to reduce resonant sound.

As before, the Monte Carlo's engine and front suspension are mounted in an extruded aluminum cradle, but the cradle is now stiffer at the steering joint, thanks to a new, one-piece machined rear crossmember and new load-bearing rear body mounts, which again help improve handling. Models equipped with a V6 engine have a two-point engine-mounting system, while V8 models have a three-point mounting system.

Powering the SS is a 5.3-liter V8 rated 303 horsepower at 5600 rpm and 323 pound-feet at 4400. Displacement on Demand (DOD) technology shuts off four cylinders in light-load cruising, for a claimed 12 percent improvement in fuel economy. Estimated fuel economy is 18/27 mpg city/highway.

Our test Monte Carlo handled well and it went when we punched it. The suspension instilled a strong sense of control on the back roads of Virginia. Steering is tight and responsive. The ride is smooth, yet we felt well connected to the road. The SS model's Goodyear Eagle RS-A tires are a little noisy, but that's a tradeoff we willingly accept for their bite. This is a nice car for cruising, whether motoring down the boulevard or charging across the state. It's stable at high speeds on interstates and in long, sweeping turns.

If you're going to run with the fast guys, you'd better have good brakes. Fortunately, the 2007 Monte Carlo boasts an improved four-wheel-disc brake system with upgraded hardware all around and increased power boost. The system provides more stopping power and reduced stopping distances, compared to previous models, as well as smoother and quieter operation, longer pad life, and more resistance to brake pulsation. ABS with EBD comes standard on the LT and SS, which helps the driver maintain steering control of the car in an emergency stopping situation.

Turn-by-Turn navigation with optional Directions and Connections service comes on the 7.0 Generation OnStar. Turn-by-Turn navigation directs the driver through the route by using the digital readout lines in the radio head. Directions are downloaded by the OnStar advisor to the vehicle and can be played back or paused through the drive up to the destination. Besides being a very easy-to-use

With 38 years of heritage behind it, the 2007 Chevrolet Monte Carlo is a fast, competent, and comfortable cruiser on interstate runs and good fun on back roads. We recommend the handsome leather interior. The SS model promises spirited acceleration, decent handling, and good brakes. This is a car shaped in a wind tunnel with the purpose of getting around a NASCAR super-speedway as quickly as possible. It's not for everybody. But then buying a Monte Carlo always has been a matter of style.