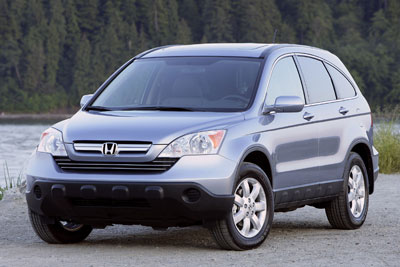 Buyers choose from three models, the LX, the EX and the EX-L. The latter comes trimmed in leather and can be fitted with an optional navigation system that incorporates a rearview video camera for safe and easy backing. All have four doors and seat five.

The engine, still an inline four cylinder, employs variable intake valve timing to optimize horsepower and torque for acceleration and cruising speeds. The transmission is a new, five-speed automatic. Real Time all-wheel drive is offered on all three models. The U.S. EPA rates the front-wheel drive CR-V at 23/30 city/highway miles per gallon and the all-wheel drive at 22/28.

Inside, compared with the 2006 CR-V, there's slightly more room in the front seat and slightly less room in the rear seat, except hiproom, which is up by about an inch. There's also marginally more cargo room. Everything by way of instruments, controls and storage is, respectively, logically arrayed, properly placed and reasonably plentiful.

As for how the '07 CR-V stacks up against the competition, well, in a number of ways, it could do better. Several, especially its arch rival, the Toyota RAV4, offer seating for seven, more powerful and smoother V6 engines and moderately more-capable systems for driving all four wheels. The Mazda CX-7, which seats five, is more fun to drive and to look at. And the Hyundai Tucson and Kia Sportage carry substantially lower sticker prices.

Thus, buyers looking for peppy performance, snazzy styling and easier financing have better choices. But for Honda loyalists looking for something better than their current CR-V or an SUV to step up into from their Civic, the '07 is the logical way to go.

The Honda CR-V continues for 2007 in one body style, a four-door, five-passenger, crossover-style sport utility. There's one engine, a 166-horsepower inline-4, and one transmission, a five-speed automatic. All come standard with front-wheel drive; four-wheel drive is available for all models ($1200).

Boxy is out. Svelte is in. Well, maybe not svelte. We're talking SUVs, here. But at least sleek, as makers learn buyers want style as well as function in their sport utilities, even in the relatively smaller, compact class. And Honda, ever the quick learner, has responded with the fully re-styled, 2007 CR-V.

The side aspect shows most clearly the '07's departure from the boxy, mini-SUV look. Starting from the gently rounded hood, the relatively fast windshield flows into a roofline that drops ever so slightly as it passes over the sharply tapered glasshouse, ending at the tailgate's top edge, which itself is pulled forward to a point almost directly above the rear wheel well. A strong character line runs from the top of the front wheel well back beneath the full-round door handles to bifurcate the side marker lens of the rear taillight. To us, it looks a little like the Mercedes-Benz R-Class in the overall outline.

The rear view presents more of the classic SUV look, with a trapezoidal backlight bookended by the trademark CR-V taillights and atop a fairly tall and relatively broad, high-relief tailgate panel. The oversize license plate recess will accommodate almost any country's registration telltale. A repeat of the front end's skid plate look masks the rear bumper mass and draws the eye to tires pushed out to the edges of the CR-V's side panels.

The interior of the new Honda CR-V focuses on function with a bit of style tossed in to make things interesting. Everything is in its place for the most part, and everything feels the way it should. Quality of materials and fit and finish overall live up to Honda's standards; some trim pieces, however, showed traces of flash, those little flat bits of plastic left over from the seams of the original molds.

The grippy, waffle-textured, fabric upholstery feels durable. The EX-L's optional leather upholstery is, obviously, richer looking and likely more durable, but no more comfortable. The front seats have slightly taller and marginally wider backs than their '06 counterparts, but are still short on thigh support. To the limited extent the new CR-V lends itself to sporty driving, the seatbacks' side bolsters do an adequate job of keeping occupants' upper bodies in place. Not so the seat bottom's bolsters, those being clearly shaped more for ease of entry and exit than for restraining occupants' posteriors. There is, however, a most welcome dead pedal against which drivers may brace a left leg as necessary and appropriate. The driver's seat ratchets six-tenths of an inch higher in the '07 over the '06.

The rear seat is more moderately contoured, the better to allow it to fold and pivot forward against the backs of the front seats. A note of clarification about the rear seat's split feature: the seat bottom breaks down 60/40, with the shorter piece on the left side; the seat backs, however, divide 40/20/40, into three sections, meaning you can fold the right or left side, the center section or any combination of the three. Nice touch, as is the replacement of the right-hinged tailgate, which is on the wrong side for curbside unloading at U.S. airports, with a top-hinged liftgate.

Dashboard and instrument cluster are classic Honda, as in, friendly to eye and hand, with the only mildly discordant note the placement of the shift lever, sprouting from a pod suspended from the center of the dash. While neither as ergonomic as a floor-mounted lever nor as natural, in an archaic sort of way, as one mounted on the steering column, it is consistent with the emphasis on flexibility in the front seat area. In the LX and EX, the space between the front seats that might otherwise host a console and floor-mounted shift lever is dedicated to a unique, multi-use tray that when not needed folds down against the side of the passenger seat, opening a walk-through access to the rear seat. To house the six-CD changer that the optional nav system displaces from the dash, the EX-L gets a more traditional, fixed center console, with cup holders and additional storage.

Most drivers will find their six-way adjustable seat and two-way adjustable steering give them the best of all worlds: a comfortable posture without compromising outward visibility. A low cowl keeps the edges of the hood in view. Rearward vision, however, sets no new standard and actually suffers some from the awkwardly shaped C-pillars. The rearview video cam that comes with the optional nav system helps and is an added safety feature because it can help the driver spot children behind the vehicle, though it lacks the guiding grid lines some others offer to help when backing into parking spaces and garages.

Audio and climate controls on the LX and EX border on retro in their simplicity and arrangement. Large, rotary knobs control the functions that vary by degrees. Buttons are used for on/off or simple selections. However, when in Park, the shift lever obstructs buttons for air conditioning functions and mirror heaters. And by operational necessity, the optional nav system layers audio and map display controls.

Comparing cargo space, the new CR-V ranks in the top half, regardless of the competitor's seating capacity. It also features one of the nicest cargo compartments, flat and without the holes that can be hazardous to bi

Function doesn't have to mean lack of refinement. Gauged from behind the steering wheel, and from any of the four passenger seats, for that matter, the new Honda CR-V proves this truism, if not quite to the same degree as some of the competition.

Power, up 10 horsepower from the '06, is competitive, at least with others in the class powered by four-cylinder engines. The turbocharged four in the Mazda CX-7 does better, of course, as do the V6 engines becoming increasingly available for compact SUVs. All of the V6s make a minimum of 200 horsepower, some reaching into the upper 200s; the new RAV4, for instance, pumps out 269 hp, the new Kia Sorento 262 hp. Granted, they all pay a price in fuel economy, but against the 3534-pound CR-V EX-L's EPA-estimated 22/28 City/Highway miles per gallon, a 3675-pound, V6-powered RAV4 gives up but 1 mpg on the City cycle and matches the CR-V on the Highway.

While hitting the gas in the CR-V won't snap any necks like some in the class aspire to, it delivers what most drivers need, if not want. And it does so reasonably smoothly, too, with less ruckus than the RAV4, although for reasons of mechanical design as much as anything, not as demurely as V6-powered alternatives.

The new, five-speed automatic transmission is a good match, not best in class but well above average in smoothness of shifts, in controlling hunting for the right gear when climbing grades and in holding a lower gear when helpful on downgrades.

Honda's available Real Time 4WD is actually an all-wheel-drive system, not a conventional four-wheel drive, as it incorporates no lockable transfer case or ultra-low, off-road gearing. As such, it works seamlessly, invisibly allocating power to the tires slipping the least, although always favoring the default front-wheel-drive focus. All CR-Vs have Honda's Vehicle Stability Assist system, which includes traction control. This, coupled with four-wheel disc brakes, vented in front and solid in the rear, and standard ABS, brake assist and electronic brake-force distribution, help drivers maintain control in emergency maneuvers or in bad weather.

In ride and handling, the new CR-V sports some encouraging tweaks in suspension geometry and component positioning. The track (the distance between wheels side to side) is wider, in front by 1.2 inches, in back by 0.8 inches. Larger wheels wear slightly fatter tires, which makes for a wider foot print where the tires touch the road. Lowering the powertrain in the body and weight-saving measures drops the center of gravity by an inch and a half. These, plus changes in steering angles, bushings and spring and shock tuning, markedly reduce body lean in cornering and dampen head toss over rough and uneven pavement. Even traversing well-aged railroad crossings at mildly elevated speeds produced no threatening sounds or gyrations. Steering assist could be backed off a notch or two, closer to that of the RAV4, which might improve directional stability and lessen the need for minor corrections in corners and long sweepers.

Auditory intrusions were minimal, for the most part, and as far as tire noise, strongly correlated with pavement type and conditions. The EX-L also did the best job of insulating occupants from outside irritants. Sounds from under the hood, although low key, left no doubt the engine is a four-cylinder and that it strained at times. Moderate wind whistle leaked into the cabin from the outside mirrors and around the A-pillars.

The new, 2007 Honda CR-V is a welcome update of one of the earliest compact SUVs. In almost all measures, from looks to mechanicals, it's not only better, but significantly so.