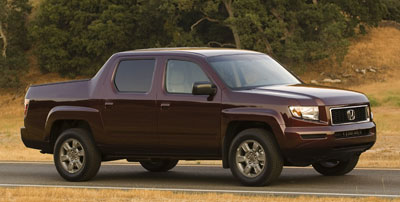 The Honda Ridgeline is more closely a mid-size pickup than a full-size, but really it's like no other truck available. It vies for the title of most innovative pickup.

Think of Honda's best attributes, then apply them to a pickup truck. We mean qualities like refinement, fit-and-finish and innovation the Honda way. The Ridgeline features an easy-to-reach, locking storage box under its bed that no other pickup can match. Other companies have been building pickups for 100 years, and none of them had thought to try this storage system.

Yet the differences between Ridgeline and more conventional pickups go all the way to the core. Ridgeline is the first mainstream pickup with fully independent rear suspension, which improves ride quality considerably. Other pickup trucks have traditionally been built with a separate nose section, cab section, and cargo bed, bolted to a separate ladder frame. Honda's pickup uses both a one-piece unibody and a steel ladder frame, welded together. Its cab and bed are built as one piece, with separate subframes for the engine, front suspension and rear suspension. Honda claims Ridgeline is 20 times more resistant to twisting than any other pickup truck, and 3.5 times more resistant to bending.

We can't swear by those figures, but we assure you that the Ridgeline is one of the nicest pickups we've driven, measured by comfort and ease of use. It's smooth, quiet and very maneuverable, with a load of useful features. While it can't do the work of some full-size pickups, its 1550-pound payload and 5000-pound towing capacity are more than enough for many buyers.

For 2007, Honda introduces the value-priced Ridgeline RTX model, which adds popular equipment such as alloy wheels and a trailer hitch for a nominal price increase compared to the base RT model. At the high end of the line, the 2007 Ridgeline RTL adds a power moonroof and XM Satellite Radio as standard equipment.

The Honda Ridgeline doesn't look or act like any other pickup truck we've driven, and it shouldn't cost an arm and a leg to own or operate. It makes pleasant, comfortable daily transportation, and it's as much pickup as many drivers will ever need.

What's New for 2007: In its second year of production, the Honda Ridgeline gets a number of changes to its trim packages, including introduction of a new RTX model ($28,300). Beyond equipment included with the base RT model, the Ridgeline RTX adds a standard trailer hitch, gray-painted alloy wheels, an accessory grille and body colored door handles. Additionally, XM Satellite Radio hardware and a power moonroof are now standard on Ridgeline RTL.

The Ridgeline is sold in four different trim levels, with each model adding more standard equipment. Following Honda's new practice, there are no exterior badges to distinguish models.

All Ridgelines are powered by a 3.5-liter V6 engine, generating 247 horsepower, with a five-speed automatic transmission and Honda's VTM-4 all-wheel-drive system. This full-time all-wheel-drive normally proportions 60 percent of the power to the front wheels, but if conditions indicate it will automatically send as much as 70 percent of the engine torque to the rear wheels. Ridgeline also incorporates a limited-slip differential with lock feature.

The RTL ($32,940) adds still more standard features, including leather upholstery, a power moonroof and XM Satellite Radio hardware. The RTL can be equipped with Ridgeline's only factory installed option: Honda's DVD-based navigation system with voice recognition ($1,550). There are also dozens of dealer-installed accessories available for all Ridgeline models.

The Honda Ridgeline's uniqueness starts with its appearance. With pickups, you need a cab and a cargo box, so form to a considerable extent follows function. Yet Ridgeline doesn't look quite like any pickup before it, whether it's from America or Japan. The grille, the front end, the cab shape, the buttresses coming down off the rear of the roof to join the integrated pickup bed, all seem to have been deliberately designed to be different, and different can be good or bad. Styling is not our favorite Ridgeline attribute.

Ridgeline's front end reminds most people of the Honda Element SUV, only more massive. The standard grille looks like an old television antenna, but a cleaner-looking antenna comes on the RTX model and is available as an accessory from Honda dealers.

Ridgeline's profile shows a lot of metal sculpting from end to end that conventional pickup trucks with separate beds don't have.

Ridgeline's cargo bed is made of steel-reinforced SMC plastic, not steel with a sprayed-on or slipped-in liner. The bed is five feet long with the tailgate up, and six and a half feet long with the tailgate down, enabling it to carry two dirt bikes or a large ATV. A tubular aluminum cargo bed extender is available for longer loads. There are four large retaining chocks, one in each corner of the bed, to help secure large pieces of cargo.

The two-way tailgate is unusual, but it works great. It will drop down in familiar fashion, top to bottom, and it also opens like a door, from right to left. There's a hidden latch on the lower right side and hinges on the left, so users don't have to lean across the tailgate to store or retrieve items in the bed or the storage trunk. The tailgate is retained by a conventional cable on the left and a patented, hidden retainer on the right.

The storage trunk, even more than the tailgate, distinguishes Ridgeline for other pickups. This covered, sealed and lockable storage bin beneath the bed works the like the trunk in a sedan. It offers 8.5 cubic feet of secure storage, which according to Honda is enough space for a 72-quart cooler or three sets of golf clubs. The compact spare tire mounts forward of the storage trunk a sliding, locking tray. The trunk is even fitted with a drain plug for those times when ice turns to water, or when accumulated crud needs to be hosed out.

What's New for 2007: All Ridgelines now feature an illuminated vanity mirror for the driver. The upgrade leather interior is a single color, rather than contrasting two-tone. The high-trim RTL now comes standard with a power moonroof and XM Satellite Radio hardware.

Inside, the Ridgeline offers as much comfort, space and convenience as any half-ton pickup available. Bucket seats come standard in front with a center console. We found the driver and front passenger seats to be roomy, comfortable and supportive, with plenty of adjustment range for rake and travel.

Anyone who has owned a late-model Honda, or even spent timing sitting in the Pilot or Element SUVs, will feel familiar with the layout inside the Ridgeline. We mean things such as nice, even seams throughout, good quality soft plastics, convenient switch placement and large, easily readable instrument graphics. The big, raised pull rings around Ridgeline's door-release levers are one of a kind and kind of cool. They're certainly effective for hefting the doors shut.

Honda's optional navigation system, with its DVD data base and eight-inch screen, is a paradigm for size, brightness, contrast and overall ease of use. The voice commands work well; alternately, the menus are simple, effective and easy to master. Yet in the Ridgeline, one of our few gripes applies to the screen's placement. It's off center a bit toward the front passenger, and flat, so in certain light in can be difficult for the driver to read. He or she has to almost lean sideways toward the center of the vehicle for a better look.

Although the Ridgeline's rear doors are shorter than the fronts, standard practice in this segment, there's no problem getting in or out, and the rear seat is nearly as roomy and versatile as those in front. It's actually comfortable for two adults, with a 24-degree backrest angle, more like a front seat. A six-foot male driver would be able to fit behind himself in the back seat with reasonable leg room and knee room.

The rear seat splits and folds, 60/40, to stash fairly large pieces of cargo in the cab. The under-seat storage space, something like an airliner's, is great for backpacks or briefcases.

The Ridgeline's unusual exterior design reduces outward visibility. The buttresses where the cargo box create a blind spot for glancing over the shoulder.

For a hefty truck, the Honda Ridgeline delivers a truly pleasant driving experience. The goodness flows from the stiffness of its unibody-on-ladder-frame construction. Factor in subframes that cradle the engine and suspension, helping isolate the cab from harsh road shocks, and Ridgeline can be a joy to operate when compared to some other trucks.

The stiffness of the body and chassis also contribute to crisp, sure handling over twisty two-lane roads. The combination of all-wheel-drive and vehicle stability electronics allows a driver to attack curves in spirited fashion with less worry about getting a wheel wrong. Ridgeline feels lighter on its feet than the Ford Explorer Sport Trac and Chevy Colorado.

The steering is surprisingly heavy, but we like it. It's more responsive and communicative than that in most other trucks. This pickup is quieter and more refined than all of the major competition, which we drove on the same day over the same course, without a lot of jarring inputs reaching the driver's seat or palms. Independent suspension front and rear is a first in the pickup market and the ride over choppy surfaces and even off-road is excellent. The back end is less likely to feel like it's losing grip when bouncing over potholes and washboard surfaces.

Its drivetrain, or the combination of engine, transmission and all-wheel drive, is impressively smooth and quiet. With four doors, five seats, AWD and independent front and rear suspension, the Ridgeline is a relatively heavy vehicle, but the 247-hp V6 engine is generally up to the task. Its power comes low enough in the revs to be useful in a loaded truck, and it's flexible overall, without the roughness at high rpm that you'll notice in some truck engines. Unladen, with only the driver inside, we never encountered an instance when we wished for more power. Yet one wonders if that might change when Ridgeline is loaded to its full 1550-pound payload or pulling the allowed 5000 pounds.

The five-speed automatic works very well with the engine. It shifts up smoothly, and will run the engine to its redline during full-throttle acceleration. On occasion it was a tad slow to shift down two or three gears, but overall its performance did not prevent us from enjoying the drive.

The brakes were sure stoppers, and the ABS works unobtrusively. We haven't tried them with a heavy load or a trailer, however.

Overall, Ridgeline impresses with its tightness and smoothness. It's more maneuverable, more enjoyable to drive, than any full-size pickup.

If you're contemplating a multi-use or commuter pickup, the Honda Ridgeline should top the shopping list, assuming you can embrace its unusual styling. From its look to its tailgate and storage innovations to its combination of body-on-frame isolation and unibody stiffness, the Ridgeline borders on revolutionary. It's reasonably priced, and should be reasonably economic to operate. Ridgeline is pleasant to drive in all circumstances, and as much truck as many buyers will ever need.