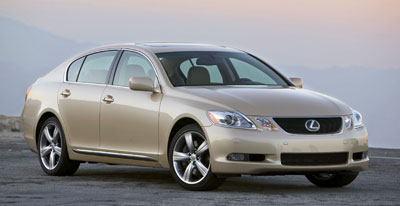 The 2007 Lexus GS makes its mark with sense as well as speed, restraint as well as luxury. Although it’s easy to think of it as an alternative to Audi, BMW and Mercedes-Benz, the Lexus GS embraces an entirely different set of values.

Lexus itself has promoted the phrase “L-finesse” to define its way of crafting an automobile, and this faintly awkward example of market-speak in fact gets right to the heart of the 2007 Lexus GS. This high-performance sedan is meant to be dynamic, yet free of gimmicks. It is meant to combine precision with lavish, luxurious appointments. It is meant to deliver the highest standard of automotive performance, yet be easily intuitive to drive. Amazing examples of automotive technology are included as standard equipment, yet the driver is never aware of them.

The Lexus GS does everything you ask, and yet it always feels effortless. If you think of the character of a BMW 5 Series sedan, the Lexus GS is its opposite.

The third-generation Lexus GS came to market for 2006 as the first completely new passenger car from Toyota’s luxury division since 2001, a showcase of the giant company’s most advanced technology. It arrived with more computing power than some third-world countries and a standard of luxury usually enjoyed only in the best zip codes. And yet, surprisingly enough, the Lexus GS has been substantially improved for 2007.

New for 2007, the lineup is joined by the GS 450h, which features a hybrid powertrain that combines a gasoline-powered V6 engine with a battery-powered electric motor to deliver an overall output of 340 horsepower combined with fuel economy of 25 mpg City/28 mpg Highway on the EPA cycle.

The 2007 GS 430’s 290-hp 4.3-liter V8 continues as before, but its high-technology, rear-wheel-drive chassis has been improved with an optional system of active anti-roll body control.

For 2007, the GS 350 has a new, more powerful 3.5-liter V6 that brings alert performance to this model, which comes in both rear-wheel drive and all-wheel drive. (The 2006 model offered 245 horsepower from 3.0-liter V6.) The GS 350 and GS 430 utilize a close-ratio six-speed automatic transmission, one of the smallest and lightest gearboxes of its type. For added performance, the transmission includes a sport mode that enables you to manually make sequential shifts with the console-mounted gear lever.

The all-wheel-drive models feature a fast-acting, clutch-type center differential that sends 70 percent of the power to the rear wheels under normal circumstances to help foster the dynamics of a rear-wheel-drive car. When wheel sensors detect slippery road conditions, as much as 50 percent of engine power is diverted to the front wheels to increase the car’s overall traction on the road.

Standard equipment includes thick, regency-style leather upholstery and a choice of wood trim in either bird’s-eye maple (brown or black) or walnut, and a complete range of convenience features. These include a sophisticated audio system with an in-dash CD player, a vehicle information system with a seven-inch touch screen, Bluetooth-compatible wireless telephone technology, and a moonroof.

Safety features that come standard on all models include front air bags, side airbags for front- and rear-seat passengers (except the GS 450h, which lacks rear-seat side airbags), and curtain-type head-protection air bags both and front and rear.

Active safety features include anti-lock brakes, electronic brake-force distribution, and Brake Assist. The available Lexus pre-collision system uses a radar sensor to detect the onset of a collision and will automatically optimize chassis calibration for quick steering response, retract the front seatbelts, initialize brake assist and even decelerate the car at 0.3 g if the driver fails to take avoiding action. The GS 450h and GS 430 come with Vehicle Dynamics Integrated Management, an electronic stability control system that processes steering angle, yaw rate, deceleration, brake pressure and wheel speed, and then uses the car’s entire range of electronic controls for the engine, brake, and steering controls to help the driver control the car in an emergency handling situation. In contrast to conventional electronic stability control systems, which react to a car’s loss of control, VDIM has been developed to anticipate a dangerous situation, and then by making certain corrections, allow the driver to continue without even realizing the system is at work.

The face of Lexus has evolved cautiously since Toyota launched the luxury division in 1990, but it's now determined to inject more passion into its styling language and the GS is leading the way. With the third-generation GS introduced for 2006, this new look has been resolved in a low, stretched shape with a long hood, a set-back greenhouse and short rear deck.

The GS sedan expresses simplicity, yet the car is thoroughly sculpted throughout its length. The design is perhaps a little predictable, yet the combination of this sleek shape and careful work to reduce aerodynamic turbulence beneath the car has produced a remarkably low 0.27 coefficient of aerodynamic drag, and this promotes a quieter interior and fuel efficiency.

The GS has high-intensity-discharge headlights with an available system that automatically compensates headlight aim for different passenger loads. The power-adjustable mirrors have de-fogging heat elements and tilt down when the car is in reverse. The variable intermittent windshield wipers actuate automatically when raindrops are sensed. Fast-acting LEDs are used in the rear brake lights. Big 18-inch wheels are available.

We should all live in houses appointed as well as the Lexus GS. Open any one of the four doors (you've got standard keyless entry, so don't worry about having to unlock the car), and you're greeted by stainless-steel scuff plates, the scent of leather and cut-pile carpeting, and the gleam of highly burnished hardwood trim.

Nearly everyone can find a comfortable position behind the steering wheel of the GS. The combination of the 10-way power-adjustable driver's seat and a thick-rimmed steering wheel with an electrical tilt/telescopic control helps you find a comfortable driving position. The driver's seat itself is sculpted with an extensive set of bolsters that support you, though they are not so restrictive that they encumber easy ingress and egress.

The tilt/telescoping steering wheel is handsomely trimmed in wood and leather. In the traditional Lexus style, the instrumentation is set deep within the dash to promote easy focus by older drivers and also features electroluminescent instrument needles for heightened visibility. Across the dash panel, each gauge, button, knob, lever and wheel is clearly identified by easily read words or symbols, so you can intuitively grasp the meaning. There's soft-touch electronic actuation for virtually every control, from the window switches to the trunk release.

Dominating the center console is a seven-inch electronic screen with touch-screen controls. Two banks of menu buttons flank the screen. The driver uses this screen to operate the audio system, climate control, and optional navigation system with backup camera, although many functions are duplicated with nearby buttons on the dashboard. Navigating through the submenus doesn't take too much brainpower, but like most multi-tasking electronic systems, a day spent with the owner's manual on a quiet side street is the best way to figure out the way to work everything properly.

Lexus has made a quality audio system a key component of its brand identity, so it's no surprise that the GS sedan has a premium system. The standard 134-watt system features an AM/FM tuner with cassette tape and an in-dash, six-disc CD changer. It plays through a 10-speaker sound system. MP3 capability isn't offered. Audiophiles can opt for the Mark Levinson Premium Surround Sound system, developed especially for the GS interior. Utilizing 5.1 surround sound playback via a 7.1-channel speaker topology, its 330-watt amplifier sends the vibes through 14 speakers via 11 channels of amplification.

The DVD-based navigation system has information for more than 6 million points of interest, while route searching is conducted at ten times the speed of previous-generation systems. The screen has excellent resolution and the map images have three-dimensional shading to aid recognition. Voice recognition makes the system a hands-free experience for the experienced user, while Spanish has finally been added to the selection of text languages, which also includes English and French.

The Bluetooth-compatible telephone system can be operated by voice command or through the seven-inch touch screen.

The Lexus interpretation of high performance doesn't sacrifice comfort and quietness, so it's sometimes easy to overlook the accomplished road manners of the Lexus GS. Its fundamental sense of balance makes driving enjoyable, yet its resilient ride and quiet cabin can take the sting out of commuting.

The gear changes of the six-speed automatic transmission are virtually undetectable, although there is a rewarding climb through the gears that's missing from the seamlessly smooth CVT used on the GS 450h hybrid. The GS is not the sort of car that encourages manual shifting, yet this is a performance car, and the feeling of acceleration is a large part of its appeal.

The high-tech electric power steering is exceptionally sophisticated. Its Variable Gear Ratio Steering reduces the amount of steering lock (not just steering effort) at very low speeds and accelerates the steering effect as the wheel approaches full lock. The system matches wheel angle to the speed at which the driver is turning the steering wheel in order to offset any delay in the car's response to steering input. This works especially well on winding roads. A correction feature offsets the effects of crosswinds, making small steering adjustments automatically.

The steering system makes it possible to manage a powerful, rear-wheel-drive car in all kinds of driving and (more important) all kinds of weather. But we felt that both the electric power steering and electric brake system occasionally deliver an unnatural feel through the controls. During ordinary driving, we adapted quickly, but the combination of these electric systems with VDIM proved faintly distracting during enthusiastic driving. In fact, the hybrid GS 450h actually annoyed us because the transition from conventional friction braking to hybrid-style regenerative electrical braking frequently proved clumsy and unpredictable.

Now that the new 3.5-liter V6 engine has been added to the GS 350 for 2007, we discovered that this car proved livelier and more enjoyable to drive than its up-market siblings.

Conventional steering and braking helped the GS 350 feel more natural than the more-expensive models with all their drive-by-wire technology. And the available 18-inch tires provide more cornering grip for drivers who feel they need it. In particular, the all-wheel-drive model feels surprisingly alert and maneuverable thanks to its rear-biased power delivery and the added horsepower of the new 3.5-liter engine.

The GS 350 gives up some dynamic control at the outer limits of its performance envelope compared to the GS 450h and GS 430, but it's more enjoyable to drive

The Lexus approach to high performance isn't easily grasped by everyone, so it's easy to overlook the genuinely rewarding road manners of the Lexus GS sedan. This car has the calm, intuitive personality we associate with the Lexus brand, yet it has capability to get you to your destination as quickly as you dare. Even during a morning commute, you can seize a few moments of driving enjoyment. At the same time, the GS never feels heavy or clumsy like its German competition. Although the third-generation GS doesn't have the styling presence of its predecessor, this remains a first-rate driver's car. The Lexus GS is more like a Bentley than a BMW, a unique character that sets it apart from its sport-sedan competition.