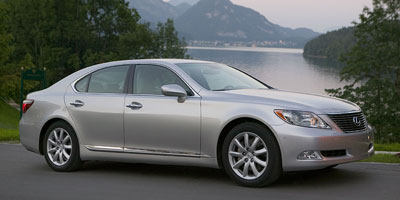 Lexus is about 100 years younger than Mercedes-Benz, but, after 20 years of hard work, it has already surpassed M-B and all the other luxury brands in terms of quality, durability, reliability, and desirability among American buyers, an astounding performance. The flagship sedan that started out as the LS 400 and then grew up as the LS 430 has been morphed into a completely new car, the LS 460, that challenges all comers as the best luxury sedan in the world. It competes with the Mercedes-Benz E- and S-Class, and BMW 5 Series and 7 Series.

The all-new 2007 Lexus LS models are bristling with technology. The LS 460 is the first car in the world with a computer-controlled eight-speed automatic transmission. An optional parking guidance system uses onboard cameras to help the driver parallel-park or park between cars, a system offered by no other manufacturer. The 460L offers reclining heated bucket seats, a cool box, dual-zone rear HVAC controls, a folding table, an ottoman, a shiatsu massager, and, of course, DVD with wireless headphones.

On the road, we found the LS 460 extremely quiet and extraordinarily smooth. Its 4.6-liter V8 can propel it from 0 to 60 mph in a mere 5.4 seconds, according to Lexus, yet it gets an EPA-rated 27 mpg Highway. The eight-speed automatic is super smooth and plays a big role in the fuel-economy story. The electrically powered steering system and adjusts according to speed. The ride quality and handling are exemplary, and an optional Touring package brings a new level of sportiness to the LS 460. The brakes have been improved, and now they are fully electronically controlled, working with all of the other computers on the car to determine how much brake force to put at each individual wheel, rain, snow or sunshine.

Safety is a primary consideration for luxury car buyers, and the LS 460 fairly drips with safety equipment, from eight standard air bags to ABS (anti-lock brakes), electronic brake assist, ESP (electronic stability program), adaptive front lighting that turns corners, and tire pressure monitoring. With the optional two-seat rear compartment, there is an additional air bag in the mix, and there are more safety options, including a pre-collision system that moves seats to a neutral position, closes the windows and sunroof, and tightens belts when the computers detect an impending collision.

Lexus designers have given their latest three models a new look. The recently redesigned Lexus ES, IS, and GS feature a look designers refer to as L-finesse, with much more attention paid to aerodynamic considerations that ultimately lead to improved high-speed stability, quieter operation, and better highway fuel mileage.

As the flagship, the new, 2007 Lexus LS 460 gets the most finesse of any of the L-finesse designs thus far. Its lines flow smoothly from its amazingly complex, crystal-like headlamp units, under the car, up over the roof and around the mirrors, with a short trip over the tiny rear deck to the integrated rear spoiler. After all that detail work on the exterior, they gave the car a drag coefficient of 0.26, tied with the best in the industry for a four-door sedan.

To climb into the left front seat of the 2007 Lexus LS 460 is to climb into the future of luxury cars. The seats are gloriously comfortable, and they are 16-way adjustable for travel and rake and tilt (12-way on the passenger side), with a three-way memory system for each front seat. All models come with perforated leather seats, with the option of semi-aniline leather with the Luxury Package option. The seat bolsters are just wide enough to retain your torso without trapping your torso or intruding on comfort. The front seats are climate-controlled on the standard car, with heated rear seats added to the L version.

Optitron is the name used by Lexus to describe its electroluminescent gauges and displays, and they are lit by bright white LEDs for excellent readability, day or night. Almost all of the needles illuminate, dominated by the large tachometer and speedometer needles. Every single switch on the car is lighted for ultimate convenience. A new thin-film-transistor (TFT) multi-information color display delivers as many as 13 information and setting displays during driving.

New four-spoke tilt-and-telescope leather-and-wood steering wheels (heated on the uplevel versions) feature redundant controls for audio, information, cruise control, radar cruise control option, telephone, and a new brake-hold feature. To use the brake-hold feature, just come to a stop, push down the brake pedal, touch the button on the steering wheel, and the brakes stay on regardless of vehicle attitude until you touch the gas pedal.

The center stack of controls is beautifully integrated, as is every single piece of interior trim, and though there are lots of buttons, they are clearly marked in large type and lighted, so there will be little confusion after a couple of drives. The navigation display is large and bright, and the graphics are crisp and sharp. An auxiliary input is provided for MP3 players, such as the Apple iPod. The standard sound system is a 276-watt, 10-speaker system that sounds wonderful until you try the optional Mark Levinson system, which we think is the single best automotive sound system on the market.

The new Lexus LS is a big, roomy and comfortable luxury sedan, with generous interior dimension and 18 cubic feet of trunk space, enough for four sets of golf clubs.

The 460L version offers more room of course, and the option of a luxurious rear-seat setup with two reclining heated bucket seats, a cool box, sunshades, additional climate ducting, and dual-zone rear HVAC control. Yet another configuration, the executive class seating package, adds a folding table and a right rear seat with a built-in ottoman section, shiatsu massager, an extra air bag, and a rear roof-mounted 9-inch DVD screen and two sets of wireless headphones. No car manufacturer this side of a $350,000 Maybach offers this kind of rear-seat setup.

The 2007 Lexus LS 460 is fast, smooth, quiet and efficent. It weighs 4245 pounds and its engine is substantially smaller than those used by its German competition. Yet it can get from rest to 60 mph in a mere 5.4 seconds, and it's good for 27 mpg highway. But acceleration is only a tiny part of the story here, and the engine is only a part of that.

This is the first car in the world with a computer-controlled eight-speed automatic transmission, a transmission that offers great acceleration with nearly imperceptible upshifts and downshifts, manual or automatic shift control, and that great highway mileage in eighth gear overdrive.

Moving off from rest with authority and acceleration seems like child's play for the LS 460. The engineers tell us that almost every part of the car, especially the engine, transmission and driveline, have been designed and then checked again and again for quietness, smoothness and balance. We found the LS 460 very, very quiet and nearly vibration-free. It seems much quieter than the competition, whether at 30 mph or 130 mph, its regulated top speed.

The electrically powered steering system is transparent. It doesn't feel any different than hydraulically powered steering, and it has progressive assist that decreases with speed. If you order the optional air suspension or the entire Touring package of suspension, tires, wheels, brakes and brake pads, you get variable gear-ratio power steering instead, giving the system the latitude between 2.5 and 3.6 rotations of the steering wheel. Without the Touring package, the ride and handling are exemplary, but with it, there is a whole new level of sportiness about the LS 460, so we recommend it highly.

Like everything else on, in or under the LS 460, the brakes have been improved, and now they are fully electronically controlled, working with all of the other computers on the car to determine speed, steering angle, throttle angle, yaw angle and all the other inputs to determine how much brake force to put at each individual wheel, rain, snow or sunshine. They, too, feel perfectly normal and extremely powerful. The Touring package will get you a set of spiral-fin ventilated discs on the long-wheelbase version.

Completely redesigned, the all-new 2007 Lexus LS 460 is surely the quietest, most serene luxury-class sedan that's been built so far. It offers an excellent combination of comfort, space, silence, and features. It's also the most electronics-intensive luxury car we've ever experienced, and if it weren't a Lexus, that would give us pause. But it is Lexus, and it promises to be as bulletproof and trouble-free as all of its predecessors. If you like silent, obedient transportation with lots of room, and you can afford the price, it's the one to have.