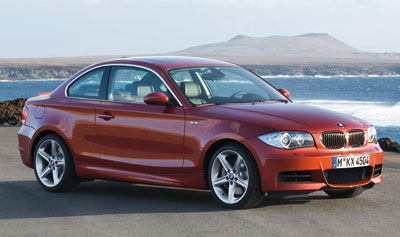 BMW already offers more different size and shapes of cars and SUVs than at any time in its history, and the North American debut of the 2008 BMW 1 Series signals another attempt to provide the sporty-minded buyer on a budget a car that he or she will really enjoy driving.

For its U.S. debut, BMW is adding a two-door coupe to the lineup, which will arrive at BMW dealerships in the first quarter of 2008, and a two-door convertible, which is expected to arrive just in time for summer weather. (The BMW 1 Series has been available in Europe and other markets for more than a year in three-door hatchback and five-door hatchback body styles.)

The 1 Series is currently offered with two diesel and three gasoline engines in most markets, but initially the U.S. will get only the full-dress, high-performance coupe, the BMW 135i, which offers more than 300 horsepower. This will be followed later on by a slightly less frenetic BMW 128i with a 230-hp inline-6 engine and nearly all of the same amenities as the 135i will have, for about $5000 less.

In many ways, the 1 Series is nothing more or less than a scaled-down coupe version of the 3 Series two-door coupe, with similar looks, similar equipment and similar performance and handling because it uses many of the same components and systems, including the big twin-turbocharged engine that was introduced last year in the 335i, so the 135i is a smaller, lighter package with the same engine for about $4000 less starting money, said to be starting around $35,000.

The 1 Series convertibles will feature soft tops expected to be of the level of quality of the previous-generation 3 Series, which is to say top quality with three-layer sound insulation.

Initially, the BMW 1 Series lineup is limited to the 135i coupe, but it will soon be followed by a less-expensive, lower-performing 128i coupe. Both the BMW 128i and BMW 135i will be offered in convertible versions, but these will not be available initially.

The BMW 135i comes with a high-performance 3.0-liter inline-6 with twin turbochargers, with either a six-speed manual or a six-speed automatic transmission with conventional floor shifter and wheel-mounted paddle shifters.

Safety features that come standard on the 135i include six air bags, ABS, electronic stability control, traction control, cornering brake control, and launch control for getting started on slippery surfaces. The 135i comes with run-flat high-performance tires. The brake lights include a panic-braking mode that lights up the entire lens extra bright whenever the brake pedal is stomped hard.

The best thing about the exterior appearance of the BMW 135i coupe is that this time around, it looks like a real car, unlike the late 318tii which was a cheapened, cut-off version of the 3 Series that attracted a small cult following but never sold well in the U.S.

The 135i's proportions were more carefully considered and while it is definitely short in the poop compared to the larger 3 Series, it looks good that way, thanks to the designers. It doesn't look cheap or cut off or bandaged. Every major part of the car, the nose, the bodyside, the roof and the rear end, blends beautifully with the rest of the car to make a shorter, narrower version of the 3 Series with a different and special roofline.

We're particularly fond of the M Aerodynamics Package made standard on the 135i, including the huge air intakes in the nose, necessary for cooling the turbocharger intake air, and the very strong, sweeping upper body line than emanates from the front fender and carries all the way to the taillamps.

The 128i, when it comes, will have a less aggressive front end appearance and will come with the smaller engine, smaller tires and alloy wheels, for a lot less money, if projections are correct.

Anyone familiar with the interior layout of the current 3 Series would be hard pressed to tell the difference between the BMW 135i and the much larger, more expensive 335i. Just about everything inside is in the same location and looks and operates the same way.

The front bucket seats are very comfortable and supportive, with big side bolsters. The 135i steering wheel tilts and telescopes, helping drivers of different shapes and sizes to find the ideal driving position.

The iDrive system features a pop-up screen on the dashtop for managing the entertainment, optional navigation, vehicle, and telephone systems.

All 135i coupes come with a 60/40 split folding rear seat than can provide almost triple the trunk room of 13 cubic feet. A storage package for the trunk area includes some tie-downs and straps and a 12-volt power point for external accessories.

The convertibles feature a soft top that can be raised or lowered in 22 seconds, even while driving at speeds up to 25 mph so you don't need to worry whether that stoplight will be long enough to finish the roof operation. The soft top takes up less trunk space than a convertible hard top would, which is partly why the design uses a soft top. They are expected to be high-quality, three-layer insulated soft tops.

Simple mathematics will tell you that driving a 306-hp, 3400-pound rear-drive coupe built on a short-wheelbase chassis adds up to a great deal of driving enjoyment, especially when the engine's torque curve is absolutely flat from 1300 to 5000 rpm and the engine redlines at 7000 rpm.

This 24-valve inline-6 packs two turbochargers and makes more than 102 hp per liter, which is considered engineering magic. BMW says the 135i will accelerate from rest to 62 mph or 100 kmh in a mere 5.3 seconds, and top out at 155 mph, which is not something that most cars in this projected price category can do.

Because the BMW 135i is essentially a scaled-down 335i, its ride, steering, and handling carry the same exemplary qualities as the larger car. Its smaller front steering tires are matched to the job of pointing the car while the fatter rear tires lay the power down in wonderfully linear fashion, and the car's weight is distributed just about 50/50 on the front and rear tires.

We found the steering, cornering, and braking performance of the BMW 135i to be exemplary, perfectly matched to the huge acceleration power of the engine.

If BMW can keep pricing under control with the current negative fluctuations between the dollar and the euro, and bring the 128i version in for about $30,000 and the high-performance 135i in for about $35,000, we see a bright future for the 1 Series in the U.S. market. It has all the style, performance and features a driver could want in a compact package built around one of the best chassis in the segment, and the only one with rear-wheel drive.

NewCarTestDrive.com correspondent Jim McCraw test drove the 135i Coupe and filed this report from Munich, Germany.