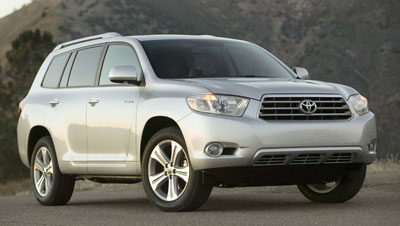 The Toyota Highlander is completely new for 2008. After seven successful model years, the Toyota Highlander has been redesigned and re-engineered to enhance its strengths. The new version is bigger and roomier. It's also been made more powerful, though not at the expense of fuel economy.

The 2008 Toyota Highlander is larger than its predecessor in every dimension. Those larger dimensions add up to increased cargo and passenger volume.

The 2008 Toyota Highlander is an even better people mover than its predecessor. The second row can slide forward and back, and the third-row seat changes from an afterthought to a space hospitable for children and capable of carrying adults. Getting in and out of the first two rows is easy, and Toyota provides both a walkthrough and a fold and slide forward second-row seat to ease access to the third row.

The Highlander is moving slightly upmarket for 2008. A four-cylinder engine is no longer an option and the base six-cylinder engine has been upgraded. The standard 3.5-liter V6 is larger and dramatically more powerful than last year's engine. Rated at 270 horsepower, it offers an increase of 55 hp over the old engine. In spite of this, fuel economy has been slightly improved. The 3.5-liter V6 is buttery smooth, as is its five-speed transmission, which downshifts seamlessly to provide ample passing punch. Front-wheel-drive Highlanders get 18/24 mpg City/Highway. All-wheel drive models are rated slightly lower at 17/23 mpg.

Hybrid models keep the same 270-hp gas/electric power train as the 2005-07 models. The hybrid also provides smooth, plentiful power. The hybrid powertrain is rated at 27/25 mpg City/Highway. While the EPA ratings are not as good as those of the 2007 model (rated 31/27 mpg), fuel economy from the 2008 Highlander is slightly better in real-world driving. EPA test procedures have changed for 2008 models and now are closer to what consumers can expect to get.

The Highlander is a so-called crossover SUV, meaning it's built more like a car than a truck. The Highlander is based on the architecture of the Toyota Camry midsize sedan. As a result, the Highlander offers a quiet cabin and a luxurious ride quality. Overall, we found the 2008 Toyota Highlander to be a pleasant way to a group of people.

Hybrid models get Toyota's Smart Entry System that includes keyless entry and starting, a 3.5-inch multifunction display screen that includes a rear backup camera, a clock, tire-pressure display, air conditioning readout, and outside temperature and trip computer information, in addition to all the hybrid-related features. Also, base Hybrids come standard with two seating rows; the third row is optional.

Its increased size puts the 2008 Toyota Highlander in the heart of the midsize SUV market. The new Highlander is about the same size as the Honda Pilot. Highlander's 95.4 cubic feet of cargo room is more than all but a handful of competitors in the popular midsize class.

Highlander fits in the middle of Toyota's three-pronged midsize SUV lineup. Highlander features softer styling than the midsize 4Runner SUV and the retro-styled FJ Cruiser; truck-based platforms, rugged suspensions and low-range transfer cases make 4Runner and FJ Cruiser highly capable off road. The Highlander is based on the same architecture that hosts the Camry and Avalon sedans. Highlander's all-wheel-drive systems are designed for taming slippery pavement and wintry conditions, not for climbing rocks and traversing rough terrain.

The design of the Highlander is cleaner than that of the pre-2008 models. It is accentuated by a side character line that leads into pronounced wheel arches. The look is more muscular than the previous-generation models, tending more toward SUV than station wagon. Available 19-inch alloy wheels add to the more muscular stance.

Toyota is known for quality and reliability, but there is a feeling among some that those areas have slipped of late. Toyota officials acknowledged that they have fallen short of some internal standards, and they've responded with a new manufacturing program called Customer First. The Highlander was the first vehicle to benefit from the program, which includes additional prototypes, additional quality control personal, and a renewed focus on product quality.

Climb in the driver's seat of the 2008 Highlander and you'll see the fruits of Customer First. The look is more upscale than the last model. Fit and finish are excellent and the design is attractive. Budget realities mean there are more hard plastic finishes than in a typical Lexus, but those plastics are nicely grained and assembled with care. Only the headliner, which looks like a cardboard egg carton, disappoints.

The various controls are easy to spot, and they move with precision. All but the base model have a 3.5-inch screen that displays trip computer and climate control information, as well as the image from the rear backup camera. The picture is awfully small, but it could help the driver avoid making the tragic mistake of backing over a child. It also speeds parallel parking or backing up to a wall.

Opt for the navigation system, and the camera is projected onto the larger navigation screen, making the image easier to see. The display also absorbs some of the audio controls, adding an extra step or two when changing stations.

Cup holders abound (with 10 plus a bottle holder in each door) and there is plenty of storage for small items.

Hybrid models have some exclusive interior touches. The gauges are trimmed in blue instead of red, and a power meter replaces the tachometer. Displayed either on the multifunction screen or the navigation screen are Consumption and Energy Monitor information. The Consumption screen displays fuel economy in real time and five-minute increments, and the Energy Monitor screen employs a schematic to show when the gas engine and electric motors are in use. It may be fun to watch these screens, but be careful because they can distract attention from the road.

Many buyers like SUVs because the high seating position lets them see over traffic. The Highlander's elevated ride height and upright seating position give it that desirable SUV trait but with easier step-in. Head and leg room are generous in the first and second rows. Up front, the leather seats are comfortable. My back felt a little sore after a few hours in the cloth seats, however. Visibility is good to all corners.

The third-row seat in the last-generation Highlander was nothing but an afterthought, fit only for packages or toddlers. Room is much better in this generation, aided by second-row seats that can slide forward. Adults can now fit, but the seat cushion is set low, so it's still not ideal for long trips. Access to the third row is easy from the passenger side, as the second row captain's chair flips and slides forward in one motion. The driver's side chair folds flat, but doesn't slide forward far enough to allow passengers to walk through.

For cargo space, the second- and third-row seats fold flat to open up a very useful 95.4 cubic feet. Tethers and levers are provided in the cargo area to make folding and unfolding the seats a breeze. The available separate opening rear glass is a nice convenience, and the load height is low for an SUV, making it easier to load groceries, duffle bags, and other cargo.

Get behind the wheel and you soon find that the 2008 Highlander is a pleasant family vehicle. Most notable is the ride quality, which is luxurious. Even with the available 19-inch wheels, the suspension smoothes all but the most jarring bumps. There is a bit of unwanted float on highways, though. Sport models and Hybrids have slightly more road feel, but are still quite comfortable.

Toyota has chosen to focus more on ride than handling. Steering feel is light, but the response is somewhat slow. All Highlanders have noticeable body lean in cornering and braking, and none of them are nimble. I prefer the Sport model's slightly firmer ride because it doesn't allow as much lean and is still comfortable. No Highlander can challenge a Nissan Murano for handling prowess. However, standard traction control and electronic stability control help keep you on your intended path.

The all-wheel-drive system in the gas models provides a full-time 50/50 front/rear torque split. In Hybrid models, the AWD system is front-drive biased, but when it detects slippage, the rear-mounted electric motor can kick in to deliver up to 25 percent of the available power to the rear wheels. Both systems will help you get the kids to school on snowy days.

The 3.5-liter V6 is a vast improvement over the last model. Producing 270 horsepower and 248 pound-feet of torque, it propels the Highlander front-drive models from 0 to 60 mph in 7.6 seconds and all-wheel-drive models in 7.8 seconds. The 3.5-liter V6 is buttery smooth, as is its five-speed transmission, which downshifts seamlessly to provide ample passing punch. A manual shift gate also allows you to choose a lower gear for more immediate power delivery.

The Hybrid's powertrain remains the same as last year. Called Hybrid Synergy Drive, it mates the 3.3-liter V6 with three electric motors to make 270 hp as well. The transmission is a continuously variable automatic that constantly adjusts gearing ratios instead of changing gears.

The Hybrid version feels a bit more responsive off the line, but isn't as quick as the standard versions, accelerating from 0-60 in 8.1 seconds. Driving the Hybrid is different than driving a standard V6 model. You start to notice those differences when you turn the key and nothing happens. Rest assured, the vehicle is operational. The gas engine just doesn't start until it's needed. The gas engine also shuts off at stoplights, but it starts up again and gets you moving as soon as you step on the accelerator. Under the right conditions (full battery charge and proper coolant temperature), you can press the EV button and drive the Hybrid up to two miles at less than 25 mph on electric power only. That sounds like it could be a big benefit in stop-and-go traffic. The Highlander Hybrid is the first Toyota hybrid to offer an EV button in the United States. Hybrid models also have an ECON button that smoothes throttle response to improve fuel economy. The continuously variable transmission feels natural. It has a standard drive mode, which allows the Hybrid to freewheel down hills, as well as a B mode, which uses engine compression to slow the vehicle when the driver's foot is off the throttle. B mode helps to recharge the battery pack.

Inside the cabin, the 3.5-liter V6 makes barely a peep, emitting only a refined growl under hard acceleration. The Hybrid powertrain is a little rougher, but is still quite refined. Wind rush is well-checked, and the only notable interior noise is some tire hum on rough pavement.

The 2008 Toyota Highlander is all-new. It offers more room and more power than the 2001-07 models without giving up any fuel economy. Highlander Hybrid models offer excellent fuel economy, particularly in the stop-and-go traffic of major metros, along with extremely low emissions. Add in Toyota's reputation for reliability and resale value, and the 2008 Highlander is a wise choice for active families.

Kirk Bell filed this report to NewCarTestDrive.com after driving the new Highlander models in Arizona.