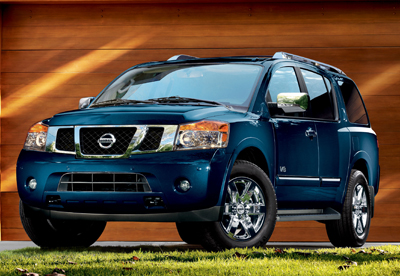 The 2009 Nissan Armada receives only minor cosmetic and packaging changes because it had a major redesign in 2008.

While fuel prices and environmental concerns have tempered the full-size SUV market, there remains a need for seven-or-eight seat vehicles with room for some cargo that have the ability to tow sizable trailers, reach remote destinations, or both, and that's what the Armada is for. Armada is rated to tow a 9,000-pound trailer.

The Armada is spacious enough to seat adults in the third row and with up to five individually folding seats allows a variety of configurations balancing people and package needs.

It possess a competitive, healthy V8 engine and five-speed automatic designed for serious work yet tamed to smoothness and background hum, and independent suspension all around capable of delivering a good ride, accurate response, and durability off the highway. This is genuine 4WD in the vein of Land Cruisers and Monteros, not merely an all-wheel-drive system for inclement weather. Yet you can drive it in urban settings without feeling you're piloting the QE2 down the Potomac.

Armada offers a host of goodies to keep everyone happy, including three air-conditioning zones and an audio system that can play two sources through speakers and headphones.

This is a good vehicle if you need it. If you don't tow much or need the larger third-row seats, there are alternatives. With a set of four winter tires and 4WD, an Armada can go places that you never expected. Drive it and you'll discover a level of quiet strength and refinement you haven't experienced in a Nissan truck, and see what we mean when a model year refresh can be better than new.

The 2009 Nissan Armada is offered in two- and four-wheel-drive versions of standard SE and upscale LE trim, all available with flex-fuel capability.

With its arching window line, semi-concealed rear door handles and Titan-esque front end, there is no mistaking the Armada for a generic sport-utility. Six-and-a-half feet tall and wide, it rides on a longer wheelbase than any full-size SUV except the Ford Expedition EL, Chevy Suburban and GMC Yukon XL.

In 2008 the front end was restyled and became more attractive because there is no longer a full-width horizontal gap between the bumper and grille; the lower opening took on the look of a menacing cartoon character that mirrors the Armada's big, bad and fun attitude. Chrome-clad wheels are now available on the LE and the grille is color-matched on SE and chrome on LE.

At the rear, a heavily contoured tailgate offers glass-only or full hatch access to cargo with a relatively low lift for such a large truck, and the wiper parks off the glass to avoid interference with access or vision. On models with roof racks, the rack has recessed tie-down loop at each corner for securing cargo with scratching off paint or generating wind whistles.

Side steps are standard across the board, watering down the off-road image a bit but making it easier for shorter folks to climb aboard. Wheel size has grown to 20 inches on LE models. Those using the 9,000-pound tow rating will appreciate the rear proximity sensors and optional rearview monitor for hooking up trailer, a great time saver that reduces the chance of a scratched rear bumper.

More striking than any exterior redesign was 2008's improvement inside. The Nissan Armada cabin looks, feels and sounds two grades better and not lifted straight out of a pickup.

Indeed, 75 percent of the interior was new for 2008 and none of it is shared with the Titan pickup. Only standard equipment and options have changed for 2009.

The cabin is generously proportioned, with more middle row legroom than the front of many cars, seating for seven or eight people, and nearly 100 cubic feet of cargo space behind the front seats to be split in a variety of ways. There are plenty of spaces to put smaller items and 14 beverage holders, some able to contain a half-gallon bottle.

Slide into the driver's seat and the sense of power envelopes even before anything is started. A commanding view forward is matched by the view to the back, unobstructed by any center headrest, although the windshield pillars get quite wide at the base and conspire with large outside mirrors that could create blind spots for shorter drivers. With adjustments for pedals, seat and steering wheel, everyone can find a comfortable driving position.

Large captain's chairs are provided up front. A soft-touch sweeping dash encompasses complete instrumentation, woodgrain trim, a variety of colors and textures, and a comprehensive central area for control of audio, climate, drive, and navigation systems, now based on a 20-gigabyte hard drive that also handles music and displays real-time traffic info through XM Satellite Radio. For the sheer volume of controls everything is well-placed and fairly intuitive, although we admit some confusion over two Back buttons just two inches apart on some models. You do not need to order navigation to have a rear-view camera, and the option list reaches to features like the heated steering wheel and Intelligent Key.

The middle row is a 40/20/40 split bench or a pair of big bucket seats with a console, depending on trim. The latter are more comfy, the former more functional, although the center rider should be of narrow persuasion to avoid pinching from seat belts and hinges.

Access to the third row is aided by the low floor, itself a byproduct of independent rear suspension (shared only by Ford Expedition in this class). The leather-look seat splits 60/40 for best load flexibility; a power fold third row is available on LE models. A full-length overhead console contains rear air controls, optional DVD player, and vents and reading lights for both back rows.

Desert testing wasn't on the program, but the combination of opening rear quarter windows and a powerful ventilation system did keep third row occupants comfortable in a 83-degree thunderstorm gridlock in a black-on-black Armada. With 11 speakers throughout, myriad source choices, and marked reductions in road and engine noise, the sound system easily keeps a crew entertained.

The Nissan Armada is a sizable piece of equipment in which you feel the heft yet it doesn't become an impediment. It drives like a really big, high car, a notable feat considering it has the strength of a truck frame underneath, more than 10 inches of ground clearance and a 4WD system that will get you off the road and not just through the snow. With tight steering and defined corners, it's also more maneuverable than you'd expect, on the trail or street, but pay attention to garage clearance signs.

The LE model comes with 20-inch wheels and Michelin lower-profile, road-biased tires. Typically a setup such as this exacts a penalty in ride comfort, road noise, isolation and so forth with nary a worthwhile gain in grip. And while the LE model we drove had slightly crisper response to the steering wheel, impressive attention to noise and vibration issues make the 2008 Armada LE ride better and quieter than earlier models without the 20-inch wheels.

Hundred-mile driving legs were dispatched in short order, stress-free to the point the six-foot passenger in back dozed off mid-day. Since off-road trucks are the only racing vehicles of this size and weight the Armada is a better cruiser than a sports car, though the independent rear end keeps it more stable and less influenced by bumps mid-corner than most competitors. Stability control is standard and barring driver inattention will never be felt without an outside influence.

One thing Nissan did lift from the Titan is the drivetrain, and it is a keeper. With 317 horses and a more relevant 385 pound-feet of torque, the Armada's 5.6-liter V8 is the strongest standard engine in its class, although mileage will typically range in the low-to-mid teens. Although it's not the most powerful SUV on the planet, the Armada's V8 and perfectly matched five-speed automatic make it very quick for its bulk and adept at pulling a crew of wakeboarders and their 6,000-pound boat. Max towing is 9,000 pounds, but better to go with a large, longer-wheelbase pickup if that's to be routine.

The brakes were upgraded in mid-2006, an improvement that should solve the brake issues of earlier models. The full complement of electronic assists is standard. Two-wheel-drive models use traction control, and 4WD models offer a 4Auto setting designed for daily use regardless of weather or road conditions. With good winter tires, you could follow the National Guard through a blizzard.

The Nissan Armada has enough features and amenities for a sybarite, flexible capability for cargo and passengers, and all the mechanical stoutness of a full-size truck without the rough ride and racket, wrapped up in a burly yet polished package in which you won't see yourself coming and going or mistaken for someone else at every intersection.