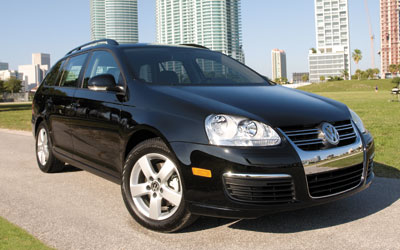 The 2009 Volkswagen Jetta will include VW's return to diesel-powered cars. The new 2009 Jetta TDI will come in sedan and wagon versions. Their clean and quiet diesel engines will have no effect on the roomy cabin or good road manners that Jetta buyers delight in.

Externally the diesel-powered models will be distinguished by blue TDI badges, in reference to Volkswagen's BlueMotion moniker for clean diesels. We expect TDI versions to be roughly $1000 more than the standard gasoline engine, and estimate EPA numbers to be 8-12 mpg ahead of the gasoline engine.

Jetta TDIs will use a 2.0-liter four-cylinder turbocharged, direct-injection diesel proven in Europe and race tracks in Volkswagen's TDI cup spec-racing series. Output is 140 horsepower (around 3800-4000 rpm) and 258 pound-feet of torque, available before 2000 rpm; that's 30 hp behind the gas engine but ahead on torque by 80 lb-ft. A six-speed manual transmission is standard, and the six-speed automatic Direct Shift Gearbox, or DSG, will be available.

In some respects the diesel feels quieter at idle than the odd-frequency sound of the five-cylinder gas engine, rather like a rattlesnake's tail muted under a heavy blanket. With the car at speed or the ventilation fan or radio on you won't hear the engine except at full-throttle. It's clean too, with many emissions superior to gasoline engines. If our mileage is indicative, cruising range will better 400 miles around town, negating frequent refueling.

You'll need a few revs to put the TDI in motion, and as the tachometer climbs past 1500 rpm serious thrust is ladled on smoothly and evenly right to redline. Don't expect to win any traffic light Grands Prix but tire chirping is not unusual, especially when launching from a stop into a sharp turn. Zero to 60 mph should come in around 9 seconds, which is how long a lot of 35-mpg cars take, but that doesn't tell the whole story. Once moving, the massive midrange torque will allow you to crawl around urban environs or pull an 8-percent grade in top gear at just 50 mph. And with six gears to choose from, power is never more than a click away.

We did a few loops for rough mileage scenarios. One involved a highway out-and-back, run at 70-75 mph with a 2.5-mile leg on 7-percent grade descent and climb (where we accelerated to 85 mph in top gear) on the return. We finished the loop with the trip computer showing average speed of 72 mph and average economy of 40.7 mpg; at 90 miles the fuel gauge still read full. On a winding two-lane through rolling countryside, 50 mph average at 43.7 mpg. Driving like we stole it in city traffic still returned 23.1 mpg. That same day a 2.5 gas engine Jetta with five-speed manual over the same courses got between 15.4 and 28.1 mpg. The diesel was run with the AC on all day in 100-degree weather; there is a way to get good fuel economy and decent performance.

Diesel fuel will have to become much more expensive than gasoline before the mileage cost benefit doesn't match the fuel price penalty. But even if it does get there, would you rather be doing 20 mpg or 30?