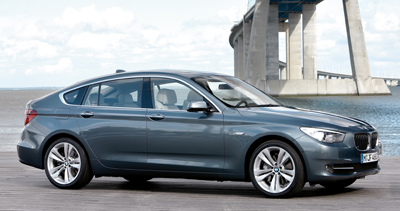 The 2010 BMW 5 Series Gran Turismo is a precursor to a redesigned 5 Series lineup, both in style and engineering. The design features a more upright version of the signature BMW twin-kidney grille and shapelier flanks thanks to a more pronounced character line running the length of the car from the headlights to the taillights and an indentation along the bottom of the doors, just above the rocker panels. Unlike other 5 Series models, the GT has frameless windows and a coupe-like hatchback body style. The car is based on a version of the 7 Series architecture that will also host the rest of the redesigned 5 Series lineup.

Though a version of the 5 Series, the Gran Turismo rides a 120-inch wheelbase, which is seven inches longer than the current 5 and as long as the short version of the larger 7 Series. Visibility is improved thanks to a higher H-point that puts the driver two inches higher than in the 7 Series. The most distinctive feature is the bi-modal trunk, which can open like a trunk lid or like a hatchback.

Inside, the BMW 5 GT will have a standard three-passenger rear bench seat, with an optional two-passenger version that adds a center console. The seat will move forward and back to maximize comfort or rear cargo room. Move the seat fully back and trunk space is 15.5 cubic feet, but leg room becomes limo-like. Move it fully forward and most passengers will still be comfortable but there will be more room for cargo, up to 20.8 cubic feet. A unique bulkhead keeps the passenger compartment sealed from the trunk, reducing rear tire noise.

Fold down the rear seat and the 5 GT offers 60 cubic feet of storage. Due to this utility, BMW calls it the first progressive activity sedan, claiming that it offers the elegance, formality and status of a sedan with the functionality and higher seating position of an SUV or, in BMW parlance, a Sport Activity Vehicle.

Initially, the BMW 5 Series Gran Turismo will be offered in one V8 model. We're guessing it'll be called the BMW 550i Gran Turismo. It will come with the same twin-turbocharged 4.4-liter V8 as offered in the X6, making 400 horsepower and 450 pound-feet of torque. An eight-speed automatic will be the lone transmission, which BMW claims will offer a 3 percent fuel-economy savings. The 5 Series GT will come with brake energy regeneration, which disconnects the alternator during acceleration and charges it during deceleration, thus offering another 2 percent fuel economy savings.

The 5 GT will offer 7 Series suspension features, namely active roll stabilization and dynamic damping control. Driving Dynamics Control will be standard. It will allow drivers to change throttle mapping, shift points, power steering calibrations and traction control based on driving style and road conditions. Integral active steering will also be offered, as will lane departure warning, active blind spot detection, night vision, a head up display, and a camera system with rear, side and top views.

Pricing hasn't been announced, but BMW says the Gran Turismo will be priced between the 5 Series and 7 Series entry models. The BMW 5 Series Gran Turismo will launched overseas in September and come to our shores in November. Six-cylinder and all-wheel-drive xDrive models will follow.