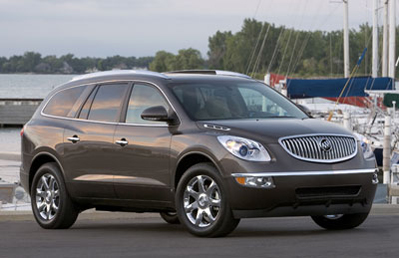 The Buick Enclave is a luxury crossover sport utility vehicle that seats seven or eight, offers big cargo space, and gets good fuel economy and performance from a modern V6 engine. As a large midsize crossover, it offers the space of a truck-based SUV yet it is built using car-like unibody construction.

Enclave shares its basic platform with the GMC Acadia and Chevy Traverse, but they are not the same and its styling is considerably different from its siblings. The Enclave is aimed at the upper end of the crossover segment, with competitors that include the Acura MDX, Lexus RX 350 and Mercedes-Benz R350.

What sets Enclave apart is its modern cabin, with stylish illumination, crisp graphics, genuine wood trim and nice leather. The seats are comfortable, and it can be ordered with a second-row bench seat or luxurious captain's chairs, depending on whether seven- or eight-passenger capacity is needed. There's lots of convenient cubby storage and the Enclave offers 115 cubic feet of cargo space with all the seats folded down.

Equipped with GM's 3.6-liter V6, Enclave offers good acceleration performance while earning an EPA-estimated 16/22 City/Highway mpg with all-wheel drive, and it's rated to tow up to 4,500 pounds. Smooth and practical, it's a superb vehicle.

For 2010, there are only minor changes. An optional 20-inch chrome alloy wheel package with P255/55HR20 tires is available. A USB port included with premium sound systems is located in the center console and the standard OnStar 8.2 system has enhanced capabilities.

The 2010 Buick Enclave is offered in CX and CXL trim levels, each with front-wheel drive (FWD) or all-wheel drive (AWD). Both come with the 3.6-liter 24-valve V6 with variable valve timing and rated at 288 horsepower.

The exterior design of the Buick Enclave is more elegant and refined than that of the GMC Acadia, which is deliberately truck-like. The Enclave carries the latest Buick design language. The protruding vertical bar grille and vestigial portholes on the hood make sure you know it's a Buick.

The long body shell is anything but boxy, with curvy, swoopy, and sexy shapes from every angle. All of the front lighting elements use clear lenses, with lots of different elements to please the eye and light the road. Everything under the bumper is kept simple and clean to draw the eye to that massive grille. The standard tires are 18-inches on seven-spoke alloy wheels, with 19-inch and 20-inch wheels and tires optional, and the big wheel and tire packages certainly add to the visual punch of the Enclave. The roof and the side windows are done in a gracefully decreasing sweep from front to rear, accented by bright-metal roof bars that follow the roof's curvature perfectly front to back.

Out back, the top-hinged tailgate with standard power opening and closing is a work of art, with the rear glass extending beyond the sheetmetal into the rear opening. The rear glass is quite large, and is convex-shaped, coming to a point just above the Buick tri-shield logo and above the wide-screen taillamps. Under the rear bumper is a diffuser panel and dual exhausts with bright tips, making for one of the tastiest rear-end treatments in the crossover segment.

The cabin is what sets the Buick Enclave apart from other seven- and eight-passenger crossovers. Starting with the double-wave dashboard and instrument panel and going all the way back to the rear cargo floor, it's as modern as tomorrow and as functional as a Swiss Army knife.

The chrome-ringed white-on-black instruments and analog clock are highly styled, with a soft blue-green illumination and halo lighting at night. The graphics are large and clear, and the wood is real. On the CXL version, the steering wheel is leather and mahogany, with 10 switches and controls mounted on it for easy use. The layout is familiar GM, with a large, bright navigation screen low enough to be shaded and high enough to be seen without distraction. The dead pedal on the far left of the floor is the first one we know of to be specially designed for use by women wearing high-heeled shoes.

Seven- or eight-passenger seating is available: The standard seven-passenger, 2-2-3 seating scheme uses second-row captain's chairs with a feature called Smart Slide that allows easy entry into the third row by flopping the seats forward and sliding them fore and aft; this can also be ordered with a second-row console for storage and 12-volt power. Or, there's a second-row bench seat for a 2-3-3 seating scheme and a total of eight occupants.

Either way, the driver and front-seat passenger have power seats. The third row is usable for more than just kids; it has enough headroom for adults, and legroom is good for kids and fair for adults. Three kids will fit across, but three adults will find it tight. Only small kids will find the third row comfortable for long trips, though, because the seat bottoms sit too low to provide full thigh support.

The Enclave gets high marks for storage space and flexibility. There's 23.2 cubic feet of cargo room just inside the power tailgate behind the third row, 67.5 cubic feet with the third-row seats down and 115.3 cubic feet with both rows folded. Another four cubic feet of storage space is found under the rear cargo floor. And if you need to, you can flop the front passenger seat over as well for extra-long cargo. Up front, the Enclave has storage on top of the dash for sunglasses, iPods, and cell phones. Buick says the Enclave has 24 storage areas, counting door pockets, under-seat areas, and built-in storage.

The Buick Enclave offers brisk acceleration performance. Buick claims a zero-to-60-mph acceleration time in the low eight-second-range, not bad for 5,000 pounds. Because the Enclave is lighter than a truck-based SUV, you don't really regret not having a V8 engine.

The Enclave's six-speed automatic transmission has a first-gear ratio that contributes to rapid acceleration and a sixth-gear overdrive that lets the engine run very relaxed at Interstate cruising speeds. It also offers frugal fuel economy for its size, with an EPA-estimated 17/24 mpg City/Highway with front-wheel drive and 16/22 mpg with AWD. By comparison, the AWD Cadillac Escalade is rated at 12/18 mpg. The Enclave is 800 pounds lighter than the Escalade and its V6 is more fuel-efficient than the Escalade's V8.

For some years now, Buicks have been all about living your driving life in splendid isolation, and that's certainly true of the Enclave. The Buick folks have taken dozens of time-consuming and expensive steps to quiet down the engine, transmission, all-wheel-drive system and tires, to isolate the front and rear suspensions and steering from the cabin and to wrap the entire package in sound-deadening materials in the floor, pillars and doors, all under the heading of QuietTuning. In lab tests, the Buick Enclave is quieter than the Lexus, Mercedes-Benz, and Acura competition, and in our road-driving experience in Missouri, it was extremely quiet. Conversations between first-row and third-row occupants at 70-plus mph were heard and understood in normal speaking voices, and the XM satellite music played through loud and clear at reasonable volumes.

The suspension on the Enclave is far more sophisticated, far sharper in handling and far more compliant and comfortable than what we've come to expect from this class of vehicles. The rear suspension is especially effective, and uses elaborate aluminum H-arms to put the wheels out as far as possible to the corners and allow for a wide, flat load floor.

Bustling around on Ozark Mountain two-lane roads or humming down I-44 and I-64 in and around St. Louis, the Enclave displayed a commendable blend of ride and handling capabilities. It provided a quiet, compliant ride, and very, very quiet road behavior. It's far more carlike than any of GM's big truck-based SUVs, with much less lean in turns. Drivers will find that it feels much smaller than its considerable size. The steering is accurate, although a bit numb.

The all-wheel-drive system operates full-time all the time, automatically adjusting to road speed, throttle position and the relative speeds of each of the four tires, wet or dry. We think the all-wheel drive is well worth the extra money. Normally, it is biased with a 90/10 front/rear torque split, and operates between 40/60 and 60/40 in a lot of driving conditions, but it can continually divert the torque to where it will do the most good, with no buttons, no levers and no fuss, just traction for practically any reasonably foreseeable condition.

The Buick Enclave is a smooth and luxurious family hauler. Roomy and comfortable, it seats seven or eight. It has a nice, smooth ride, and its modern V6 engine provides smooth power and good fuel economy for a vehicle this large.