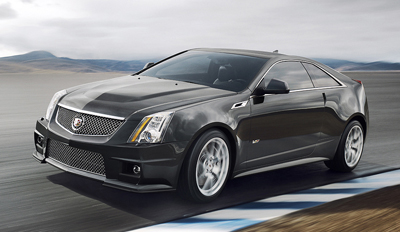 The Cadillac CTS, the marque's lowest-priced luxury car, was originally offered only as a four-door sedan. In 2009, Cadillac added a Sport Wagon. For the 2011 model year, a coupe is on the way.

Like the CTS sedan and wagon, the coupe will be offered with rear-wheel drive or all-wheel drive. Unlike the sedan, the CTS coupe will be a 2+2, meaning room for four with cramped quarters in back.

The coupe shares the same platform as the sedan, but the only shared components will be the instrument panel, center console, headlights, front fenders and grille. Coupe and sedan ride on the same wheelbase, but the coupe is two inches lower and two inches shorter.

The CTS coupe was developed as a proposal for the future of Cadillac's Art and Science design philosophy at the company's design studio. It debuted as a concept car at the 2008 North American International Auto Show in Detroit and is set to be released in the spring of 2010.

Unique exterior design elements are many. Most notable are the nearly horizontal rear glass, the windshield, which is laid back at a more extreme angle, and the hardtop styling that lacks center B-pillars. Instead of door handles, the doors are opened by touchpads. The front and rear fascia are unique to the coupe, with brake cooling vents up front and mesh lower grilles and center exhaust outlets in the rear. The rear spoiler is integrated into the center high-mounted stop light, and the taillights feature LEDs.

The base engine in the CTS coupe will be a direct-injected 3.6-liter V6 making 304 horsepower and delivering 27 mpg on the highway on unleaded gasoline. The standard transmission will be a six-speed manual. A six-speed automatic with manual shift capability through steering wheel buttons will be optional.

Inside, the CTS coupe will have hand-sewn accents on the doors, center console and instrument panel. Recaro sport seats with 14-way adjustments will be offered. Available technologies will include iPod/MP3 capability, a 40-gigabyte hard drive to hold music files, a pop-up navigation system, adaptive headlights, Bluetooth connectivity, a rearview camera, and a Bose 5.1 surround sound audio system.

Due in the summer of 2010 is the CTS-V coupe. Like the CTS-V sedan, it will be motivated by a supercharged 6.2-liter V8 making 556 horsepower and 551 pound-feet of torque. The CTS-V will be offered with a choice of Tremec six-speed manual transmission or six-speed automatic, the latter with steering wheel shift buttons. Cadillac claims the CTS-V coupe will be able to accelerate from 0 to 60 mph in 3.9 seconds.

On the outside, the CTS-V coupe will have a unique grille that doubles air intake volume. To clear the supercharger, the center section of the hood will be raised. The front and rear fascia will also be unique, and the rear track will be one inch wider.

The same Magnetic Ride Control system from the sedan will be used by the coupe. Magnetic Ride Control employs adjustable shocks that use a magnetic fluid to react to the road on a constant basis. An electrical charge makes the shocks firmer during cornering, and removing that charge softens them up during straight line driving so they can better deal with bumps. The coupe will also get large Brembo brakes and standard Michelin Pilot Sport PS2 summer tires on 19-inch alloy wheels.

Inside, the CTS-V coupe will feature microfiber material on the steering wheel, seat inserts, and shifter. The Recarro sport seats from the base coupe will also be optional, as will a new Saffron interior color option.