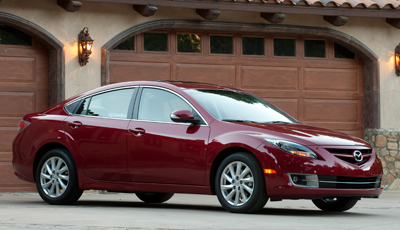 The Mazda6 is one of the most appealing midsize sedans on the market, particularly to drivers who enjoy spirited handling and performance. It looks great, with sporty styling suggestive of a coupe. Inside is a nice cabin with lots of convenience features. There’s plenty of room for four adults, and it seats five. And despite the swoopy looks, its has a big trunk. It checks all the boxes as a practical midsize sedan.

But what we like most about the Mazda 6 is its driving dynamics. Underway, it delivers sparkling performance, offering a terrific driving experience among the midsize sedans. The Mazda6 delivers good fuel economy, which has been further improved for 2011. It’s also attractively priced.

The 2011 Mazda 6 brings styling revisions and interior upgrades. Changes to the Mazda6 for 2011 include new headlights and fog lights, new folding mirrors with turn signals, new cloth upholstery material, a new steering wheel, and new 17-inch alloy wheels. The Mazda6 Touring model gets Bluetooth, and the Mazda6 Grand Touring gets a multi-information display with rearview camera. Navigation with voice activation has been upgraded for 2011, with a 7-inch touch-screen and rearview camera available for the Mazda6 Grand Touring model.

The 2011 Mazda6 gets better fuel economy from both of its available engines than the 2010 versions did. The Mazda6 was completely redesigned and re-engineered for the 2009 model year. Mazda 6i models come with 2.5-liter four-cylinder engines, Mazda 6s versions get the 3.7-liter V6.

The 3.7-liter V6 makes 272 horsepower and 269 pound-feet of torque, delivers extraordinary performance, and is EPA-rated at 18/27 mpg, a 1.5-mpg increase over 2010. We found it a delight to drive, with a 6-speed automatic mated to the most powerful V6 in the class.

Mazda6 competes against an impressive group of midsize sedans. Among them: Toyota Camry, Honda Accord, Chevrolet Malibu, Nissan Altima, Volkswagen Jetta, Hyundai Sonata, Kia Optima. Those who fully enjoy and appreciate the driving experience may find the Mazda6 the most compelling. Competitive pricing may seal the deal.

Mazda 6s has the 3.7-liter V6 engine, a 6-speed automatic transmission, and chrome dual-exhaust outlets. It’s available with the Touring Plus or Grand Touring trim levels, which are equipped similarly to the i models, although the s Grand Touring gets 18-inch alloy wheels.

If you were to stretch the shape of the Mazda6, you'd find the influence of the RX-8 sports car in numerous places. This is a distinctive car, and if you like modern design, you'll like the Mazda6.

The Mazda6 does not look like a big car. With its flowing roofline, wraparound overhangs that appear shorter than they are, classy grille and front fascia, and sleek lines overall, the Mazda6 comes across as a smaller, trimmer, tidier car than some of its competitors.

The new headlights are housed in sleek and stylishly shaped housings, each headlamp like a squeezed trapezoid or pea pod with pointy ends, inlaid on the graceful front fenders. An upper body crease that would normally go to the front wheel stops just shy of the fenders, and the rear wheel arches have double creases to mirror the front.

The Mazda6 five-sided grille has a deep V-shape to it and it's all body-colored, except for the chrome winged Mazda logo. The new fog lights are set in horizontal openings surrounded by some light gray plastic and horizontal character lines in the airdam. At the rear, the horizontal taillamps wrap around the sides, and our four-cylinder had neat twin pipes coming out the right rear, connected to a twin-outlet muffler. The 17-inch alloy wheels on our Mazda 6i Grand Touring were beautiful, and bore Michelin P215/55R tires.

The Mazda6 cabin uses contemporary materials, with metallic-finish surfaces rather than phony wood trim. The exception is the console trim that slashes across the passenger's dash which, on some models, appears a cross between silver-veined black granite and ash-black burnt wood with wide rings in it. It's a look we've not run across recently. We especially liked the brushed aluminum look of the rings around the instruments on our car.

The seats are cloth on the Sport, Touring, and Touring Plus, and have good support and comfort. It's a new cloth for 2011, sporty and rugged like the previous material. Mazda has long been a leader in cloth upholstery. Our Mazda 6i Grand Touring had perforated black leather and was beautiful.

The seats are comfortable front and rear, regardless of upholstery. There is generous room inside, so even six-foot-plus bodies can sit in front and then jump in back without moving the front seat, even on cars with the moonroof. The rear seat offers plenty of room, a center armrest (no pass-through), and a 60/40 split seatback that's easy to fold.

Visibility is good in all directions. The hood slopes out of sight, common in this aerodynamic era. The roof pillars are not so wide that they obstruct vision; the outside mirrors are fairly low and so is the dashboard, all adding up to a good view out. Xenon headlights are included with the Grand Touring Technology Package. Dash and cabin lighting are more than adequate with either set of gauges.

Instruments are laid out with fuel and tachometer to the left, speed and coolant temperature to the right. Between the two are the odometers, outside temperature. When shifting an automatic manually the gear selected is shown above the odometers.

At top center of the dash is a deep red digital display for climate, radio and clock that's easily read by anyone in the car. Below it are center vents, the audio system or navigation if so equipped, and basic three-ring climate controls. Big omnidirectional round vents are on each end of the dash for ventilation. Lights and wipers are on stalks. Some secondary controls are to the left of the steering wheel next to a small storage tray. Redundant audio, telephony and cruise controls are on the steering wheel.

All the systems are simple to use. Our biggest complaint is the beep that accompanies every volume adjustment made by the steering wheel toggle. But this is probably one of the 24 adjustments, including door lock programming, turn signal click volume, and blind spot monitor, the dealer can alter for you.

Good storage space can be found in the center console, doors, and glovebox.

A Blind Spot Monitoring System comes on Touring Plus and Grand Touring models, though we have noted no significant blind spots on the Mazda6. At speeds greater than 20 mph the system senses vehicles adjacent; it casts an orange image onto the exterior mirror if it senses your car going where another car is, and makes a noise if you signal while it senses a vehicle in the way. It can be a very helpful feature. We found it worked better on the Mazda6 and caused fewer false alarms than similar systems we've tried on some other brands.

Cargo space is one of the strong suits of the Mazda6. With 16.6 cubic feet of volume, the Mazda6 is at or near the top of the class in cargo space. It also boasts a low liftover height: One needs to lift cargo only to the top of the bumper and slide it in, the car's sweeping roofline making the vertical opening much larger than the depth aspect. There are no hinges or trunk arms within the opening nor cargo shelf impediments, and the rear seatbacks can be released from the trunk.

The chassis structure is very stiff, which is a good thing. Chassis rigidity is a key element in allowing a smooth ride and sharp handling. We noted no creaks or squeaks from the Mazda6 while entering steep driveways or taking angled traverses of sharp bumps.

Mazda's renowned zoom-zoom driving enjoyment comes with this refined Mazda6. Purists might complain about the lack of availability of a manual transmission with the V6 engine, but the sequential automatic does have a manual mode. And besides, there's nothing wrong with the four-cylinder Mazda 6i Sport.

Automatic and manual transmissions have well-spaced gears to make the best of the four-cylinder's output. The shift and clutch action on the close-ratio 6-speed manual show Mazda's sports car abilities without any sports car compromises.

The 2.5-liter four-cylinder engine, with 170 horsepower, gets the job done just fine, with the best coming on as the rev counter swings through the 4500-4800 rpm range and keeps pulling to near redline. It's plenty to get the Mazda6 around town or up a hill and cruises on the highway effortlessly at less than 3000 rpm, regardless of transmission. We never wish we had another hundred horsepower when driving it.

The 3.7-liter V6, with 272 horsepower, has loads of mid-range torque and delivers better acceleration than the 2.5. In fact this engine is larger and more powerful than its competitors. And it delivers good, if not class-leading fuel economy: 18/27 mpg for the 2011 Mazda6, increased from 17/25 for the 2010 model.

Each Mazda6 model has its own calibrations for the same suspension system, and they tend to feel more buttoned down as price and engine size increase. But a lot of this can be traced to tires, and a four-cylinder car with the 17-inch wheels is arguably the most fun on a winding road because it's a couple of hundred pounds lighter than the V6 models. But the standard 17-inch wheels only come with the automatic transmission; if you want the full sporty effect, with the 6-speed gearbox, you'd have to order the i sport and then get aftermarket wheels and tires, because the 17-inch alloy wheels aren't a stand-alone option.

At the top extreme, a V6 on 18-inch wheels has plenty of grip and surprisingly good sharp-impact rejection (think lane-divider dots) but it is on the firm side, not recommended for lousy infrastructure, and some road noise seeps in to the cabin. All the models have stability control, but it doesn't engage easily, suggesting there's a lot of stability inherent in the handling.

The closest competitors in the grip and ride components would be the Malibu V6 for ride, Altima V6 for fun, four-cylinder Accord for fun, Camry for commuting comfort, and Jetta for interior design. The Mazda6 leans toward the fun end of the spectrum, while maintaining a good ride quality.

The 2010 Mazda6 is a terrific entrant in the midsize class, with lots of room and refinement. It is definitely in the mainstream of midsize sedans, yet Mazda has maintained the exceptional driving characteristics for which the brand is well-known, a trait that should prove popular with those who enjoy driving and don't consider a car mere transportation.