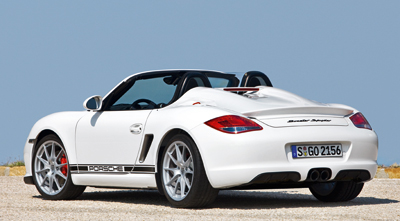 Sports cars are cool, and lightweight versions of sports cars are even cooler. For 2011, Porsche is taking weight out of the mid-engine Boxster, 176 pounds to be exact, and calling it the Boxster Spyder.

The 2011 Porsche Boxster Spyder isn't just a limited edition offering or a slightly modified version of the base car. Instead it's the third model in the Boxster lineup, and it looks very different from the others.

The most notable differences are the lightweight two-piece top and the unique rear deck. Instead of a traditional power top, the Boxster Spyder's canvas top stretches over the car like a bikini top, covering only what it needs to cover. Weighing only 13 pounds, the main portion of the top uses a carbon fiber header and the other portion is the rear wind deflector and rear window. The rear deck is made of aluminum. It has two convex humps that mimic the shape of the roll bars and taper off toward the rear. The doors are also aluminum.

Other exterior changes include a Porsche stripe along the rocker panels, shorter side windows, unique lightweight 19-inch wheels (that save a total of 11 pounds), twin tailpipes painted black, a fixed rear spoiler, and minor changes to the air intakes up front, at the rear and along the sides of the car. The logo stripes come in contrasting black, white or silver, depending on the color of the car, and mimic the traditional stripes on Porsches dating back to the late 1960s.

Inside, the Boxster Spyder omits the radio, air conditioning and cupholders in the name of weight savings. The leather and alcantara sport bucket seats use carbon fiber frames and weigh about 26 pounds less than the optional power buckets. The door pulls are fabric instead of aluminum and the hood over the instruments has been eliminated. Despite the changes, the Spyder can be optioned like a Boxster S, and the radio, cupholders and power sport seats are all available at no cost. Those looking to save as much weight as possible can opt for a lithium-ion battery, which saves 22 pounds and costs about $3000.

Underneath, the Boxster Spyder comes with a locking rear differential, stiffer shocks and anti-roll bars, and shorter, stiffer springs that lower the ride height 20 millimeters, Thanks to the lighter top, the car's center of gravity is 25 millimeters lower.

Motivation is provided by the same direct-injected 3.4-liter flat six as other Boxsters, but it is tuned like that in the Cayman S. It puts out 320 horsepower (10 more than in the Boxster S) at 7200 rpm and 273 pound-feet of torque at 4750 rpm. Maximum output comes 950 rpm higher than in the Boxster S. The standard transmission is a six-speed manual, and the seven-speed Porsche Doppelkupplung (PDK) automated manual transmission is optional. Porsche says the Boxster Spyder can accelerate from 0 to 60 mph in 4.6 seconds when the PDK is ordered along with the Sport Chrono Plus package that includes launch control.

The Porsche Boxster Spyder will be sold as a 2011 model starting in February, along with 2010 versions of the Boxster and Boxster S. Porsche expects to sell about 1500 units per year.