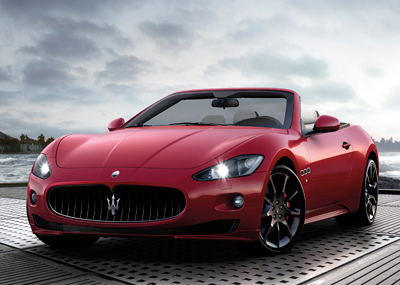 Maserati North America offers two new models this fall with the introduction of the 2012 Maserati GranTurismo MC and GranTurismo Convertible Sport. Essentially, elevated-performance versions of the GranTurismo S coupe and convertible, they were revealed at the New York International Auto Show in April and are expected to go on sale in August 2011.

What is a Maserati? If you've followed this marque through the years, Maserati has been many things. For history lovers, it built fast, gorgeous winning race cars in the Fifties. But for those who never quite forget a scandal, more recently, it built boxy little twin-turbo cars of positively horrifying unreliability.

But with those moments, good and bad, behind it, Maserati is working diligently to reestablish its reputation as the builder of fast, elegant, truly elite sporting cars. To that end, the Maserati Quattroporte is one of the preeminent luxury/performance sedans, combining opulence and pace with the flare of Italian design.

However, any Risorgimento (resurgence) by Maserati must of course focus on its signature sports cars.

The Maserati GranTurismo S coupe and convertible are pleasing, if unsurprising, variants on the populous front-engine, four-seat grand-tourer theme. If they seem a mite conservative, that is because they must not upstage the flamboyant supercar extremism of their corporate stablemate, Ferrari. Center-engine Ferraris remain the gold standard of burnout braggadocio, while Maserati's GranTurismos have seamlessly, almost surreptitiously joined the American motoring scene.

If you want the lap record, however, the GranTurismo MC is your choice. As with the Convertible Sport, the MC's front-engine layout has been optimized, with the engine block mounted behind the front axle to deliver near-50/50 weight distribution, front to rear. Combined with race-bred double-wishbone suspension and a lowered chassis, the coupe is designed to provide improved agility on twisty roads, and large 255/35ZR20 front tires and 295/35ZR20 rear tires promise formidable grip.

In addition, Maserati supplies an electronic stability program, using the brakes and engine to automatically restore stability when the vehicle begins to slide. However, push the Sport button and the stability program's intervention is reduced, permitting sportier driving. Further aiding cornering power, a limited-slip differential is standard, and adaptive headlights point their beam into turns at night.

Finally, the MC body has been wind tunnel-tuned for maximum efficiency. Lowered to limit lift-generating air beneath the car, the body is designed to produce minimum drag and maximum downforce. In comparison to the GranTurismo S, at 200 kilometers per hour (124 mph), the MC generates 24-percent more downforce in front and 50-percent more downforce at the rear.

For enthusiasts pleasantly awestruck by grand touring cars of great speed, the GranTurismo MC and Convertible Sport will elicit the same haunted “Oooo . . .” that Maseratis did in the Fifties, and to Maserati, that “Oooo . . .” is the Promised Land.

Pricing for the new models will likely not be available until the models go on sale in August 2011. So we guessed.