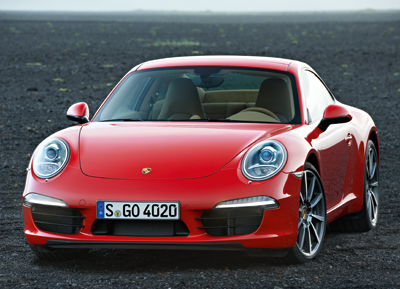 The Porsche 911 is all-new for 2012, a new-generation version completely redesigned from the ground up. Now starting its seventh generation, the new 911 maintains all the familiar styling cues fans expect, but the 2012 Porsche 911 Carrera S we drove was delightfully, almost subversively different from the outgoing version.

It's easy to recognize the classic Porsche profile, with the long, sloping snout, the flyline roof and tapered rear, but the 2012 911 is longer, lower, and wider than before. It's also lighter. This is a case of Darwinian evolution at work, after all, and odds are, if the new Carrera comes up in your rearview mirror you better slip to the side. You're just prey.

As is the norm with Porsche, the maker plans to steadily roll out a variety of variants of the 911, from the base Carrera to the Cabriolets up to an eventual GT3.

For 2012, the Porsche 911 is available in two versions, Carrera and Carrera S.

The Carrera cabriolet gets a new soft top that can be raised or lowered in just 13 seconds and at speeds of up to 31 mph.

Our first drive opportunity landed us in the driver's seat of the 911 Carrera S, the model we expect most Porsche 911 buyers to choose. The Carrera S features a slightly larger engine, at 3.8 liters, making a sizable 400 horsepower and 325 pound-feet of torque. More amazing is the fact that it can come within a tenth of a second, at 4.1 seconds, of matching the 0 to 60 times of the old 911 GT3.

Of course, if straight-line acceleration were all one wanted there are plenty of muscle cars and rice rockets that can deliver neck-snapping acceleration, and at a fraction of the 911's stiff price tag. But Porsche is all about the overall driving experience, and perhaps nothing personifies that better than the 911 Carrera S.

The new 911 feels familiar, but it just does things that much better. Much of this is thanks to the integration of new technologies such as the electro-hydraulic power steering system and the Porsche Dynamic Chassis Control active roll stabilization system. Porsche claims the PDCC technology enhances cornering performance by keeping the tires in their optimal position at all times while minimizing body roll. There's also the fact that despite the longer, wider body, Porsche engineers have managed to shave about 100 pounds off the weight of the 2012 911 Carrera S, which tilts the scales at 3,113 pounds when equipped with the PDK gearbox.

Speaking of transmissions, the new 911 introduces an industry first 7-speed manual. Yet the PDK double-clutch is so quick and smooth we might be tempted to speak heresy and suggest the PDK is actually the preferable choice.

While the lower weight clearly enhances the overall performance of the new 911 it's also a factor in fuel economy, and here's where the Carrera S delivers another pleasant surprise, the 2012 remake boosting mileage by as much as 16 percent. The outgoing base Carrera, for example, delivered an EPA-estimated 18 mpg City/29 Highway, the Carrera S 19/26 mpg. The more powerful 2012 Porsche 911 Carrera S bumps that up to 20/27 mpg. The new one is both faster and more fuel efficient.

Also enhancing mileage: the new 911 gets Auto Stop/Start, technology that briefly shuts off the engine rather than idling, say, at a stoplight. The powertrain instantly fires back up when the driver's foot lifts off the brake.

Despite the added power and even more aggressive handling, the 2012 Porsche 911 Carrera S is a markedly more refined machine. The interior has the lavish appointments you'd expect in a high-line sedan, with such niceties as the new 18-way power driver's seat. That'll keep you firmly in place during the hardest cornering, but it's also comfortable enough to be an everyday driver. Perhaps. Just recognize you'll be facing temptation every time you hit the Start button.

The 2012 Porsche 911 is available in coupe and convertible versions, each in Carrera and Carrera S tune.

Perhaps the biggest challenge for Porsche chief designer Michael Mauer and his team was finding a way to give the 2012 911 line a fresh look while maintaining its iconic shape. There's little doubt you'll immediately recognize the look of the seventh-generation model while also realizing how much it has subtly changes.

A closer look, and a handy tape measure, will reveal that the 2012 reincarnation's wheelbase is stretched about four inches, the overall length by two. The new Porsche 911 has a slightly lower roof and a wider track. It also has bigger wheels, something designers are always looking for.

The 911's timeless headlamps are carried over, of course, but have a bit more of a 3-dimensional look, in keeping with a body that is more sculpted than before. The sheet metal has a more precise and taught feel, with a cabin that has moved ever so slightly forward. The overall appearance is one that is more dynamic, refined yet aggressive.

Even the base 911 Carrera now gets a pop-up, or active, wing. It's part of a new handling package that can include the Porsche Dynamic Chassis Control (PDCC) active roll stabilization system.

The new 911 may be bigger but it's shed a surprising amount of weight thanks to the increased use of aluminum and other lightweight materials. Curb weight totals 3,113 pounds with the PDK (double-clutch) gearbox, about 100 pounds less than the old model, internally known as the 997. That's no mean feat considering all the other new technologies stuffed inside the 2012 Porsche 911, internally known as 991.

Sports cars have traditionally put their emphasis on what's under the hood, not in the cabin, but recent generations of the Porsche 911 have focused more attention on the interior. The 2012 remake delivers the sort of refined and luxurious feel you'd expect from a luxury sedan in a similar price range.

New 14-way power sports seats are comfortable and enveloping, able to keep you in place even during the harshest cornering maneuvers. And unlike some, you can climb in and out with relative ease. As for the rear, well, the new 911 remains the classic 2+2 and the back seats are best suited to small children and light packages.

The overall appearance of the interior is one of Teutonic efficiency. The detailing is handsome and elegant but avoids the sort of gold-chain bling you expect from Ferrari and Lamborghini. There was a clear emphasis on improved ergonomics and that does mean some handsome additions on the technology front, with well-placed controls and easy-to-read gauges, a larger LCD navigation screen and a Panamera-derived center console that places key vehicle functions within easy reach. The 911 is smaller and less overloaded with toggles and switches than the four-door, thankfully.

There's a much better layout to the five-circle gauge cluster visible through the steering wheel. One of those is a multi-function LCD screen that can offer up a range of programmable information, including the most immediate navigation instructions or an active G-meter that instantly shows how hard you're accelerating, braking or turning. At one point, during a run down the test track it nudged an astounding 1.3 g.

Porsche has made much of introducing the first 7-speed manual gearbox, so we split the day between the stick and the 7-speed PDK: Porsche Doppelkupplungsgetriebe, or double-clutch. While the manual gearbox is clearly going to be near and dear to the hearts of those who feel there must be three pedals on the floor of a true sports car, we wouldn't be surprised to see the PDK start to raise doubts among those even slightly less committed.

The purists might question their own judgment when they realize the double-clutch is just a wee bit faster, and just as much fun to operate when you turn to the steering wheel-mounted paddle shifters, which pair especially well with the optional sport wheel.

The 911 has always been quick, even in base form. And with the Carrera S now rivaling the acceleration of the old GT3 it'll sink you even deeper into the sport driver's seat when you use Launch Control. Available only on the PDK edition, the system is designed to minimize wheel spin and maximize torque for the fastest off-the-line acceleration: press the button, hold down the brake, press the throttle to the floor and wait 'til it tells you to go. Releasing the brake, we noticed the way our peripheral vision seemed to vanish as our eyes focused on the barrier at the end of the temporary track Porsche set up for testing at California's Santa Maria Airport.

We hit 112 mph before slamming on the oversized brakes, quickly bringing us to a halt well before the looming barrier. Goosing the throttle again, we zigged and zagged through a serpentine course that included decreasing radius corners and a tight slalom stretch.

Straight line performance is impressive but what really matters is how the Carrera S effortlessly maneuvers through more demanding circumstances. It certainly impresses to know that it managed a 7:40 lap time on the grueling Nurburgring Nordscliefe, a full 16 seconds faster than the outgoing, sixth-generation Porsche 911.

Having the track available for the media was a smart move considering that even the tightest on-road driving we experienced offered little challenge to the 2012 Porsche 911 Carrera S. The biggest trial was keeping the car down even somewhat close to the speed limit, as one of our normally more demure colleagues discovered when the arresting officer noted her 94 mph speed in a 65 zone.

Most drivers will likely also be impressed with how much quieter and smoother the new 911 is on regular roads. But not all. We did hear complaints from a few of the collected media hordes that the new model was somehow too easy to drive. That was similar to what many said, a decade-some back, when an earlier 911 redesign switched to a water-cooled engine and re-engineered the suspension to reduce the chances of having the front and rear ends trade places when the car was overcooked in a corner.

If any current concern holds water it's that Porsche has almost numbed out the steering. To our mind, and hands, that's overstating the case. Yes, it's smoother and less likely to pass on the raw sensation of hitting every twig and pebble on the road. But unlike all too many of the new electric power steering systems that makers are fast migrating to, the electro-hydraulic system on the 2012 Porsche 911 continues to keep you in touch more than enough to let you know precisely what the car is doing.

One does have to get used to what the car is telling you, however, especially due to the much more limited amount of body roll allowed by the Dynamic Chassis Control system. But, again, there's still enough that it only took a few minutes, and a couple hard turns, to feel confident, comfortable and in touch with what the new 911 was doing.

Few products better define their genre than the Porsche 911. Sure, if you've got an extra $100,000 or so you might find something faster, even something that can nudge an extra second or so or your lap times. But for the money, it's going to be difficult to find anything that comes close to the breathtaking performance and pure driving pleasure of the all-new 911 Carrera S. Any concerns we had about how the maker might improve upon the outgoing model have been quelled by the time we spent behind the wheel. Porsche planners are gleefully anticipating a big jump in sales this year and we clearly understand why.

Paul Eisenstein filed this NewCarTestDrive.com report after his test drive of the 911 Carrera S in Southern California.